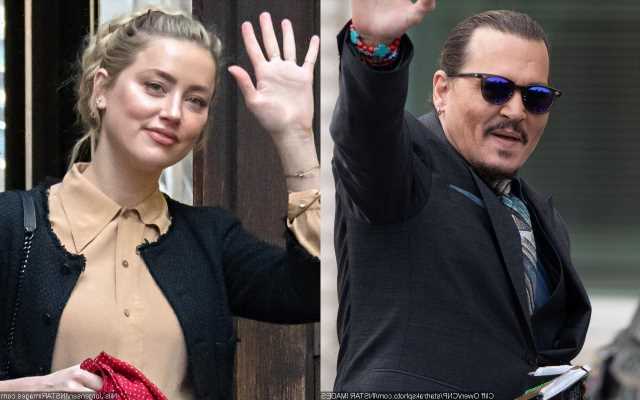 The jurors submit questions to the judge about one of the ‘Aquaman’ actress’ alleged defamatory statements in her 2018 Washington Post op-ed titled ‘I Spoke Up Against Sexual Violence and Faced Our Culture’s Wrath. That Has to Change’.

AceShowbiz -The judge in the Johnny Depp and Amber Heard defamation trial answered jurors’ questions in court. The jury in the trial expressed confusion about how they’re supposed to decide whether the “Aquaman” actress defamed her former husband.

The jury, who sat for weeks of testimony in the $50 million defamation lawsuit put forward by the “Pirates of the Caribbean” star, who in turn is being counter-sued by his ex-wife for $100 million, got clarification over what they were supposed to be deciding in the case, which is regards to a 2018 Washington Post op-ed penned by the 37-year-old actress titled “I Spoke Up Against Sexual Violence and Faced Our Culture’s Wrath. That Has to Change”, which did not name the 56-year-old actor.

For the official record in Fairfax County Court in Virginia, Judge Penny Azcarate said, “The question is does question number three, the statement is false, pertain to the headline ‘I Spoke Up Against Sexual Violence and Faced Our Culture’s Wrath’… or does it pertain to the content, everything written in the op-ed?” She continued, explaining the jury’s conundrum, who had been deliberating the case for more than nine hours on Tuesday, May 31, their first full day since the court heard closing arguments last week.

Judge Azcarate went on, “So, I was just going to answer to say that the title is the statement in question for number 3, does that seem appropriate to everybody?” She, and the lawyers, said that she would tell the jurors that “the statement is the headline not the entire op-ed.”

The jury must rule if the statements “then two years ago, I became a public figure representing domestic abuse, and I felt the full force of our culture’s wrath for women who speak out” and “I had the rare vantage point of seeing, in real time, how institutions protect men accused of abuse” were true or not. In addition, they also must say the statements are defamatory.”

The former couple, who were married between 2015 and 2017, have been embroiled in legal battles since 2019 with this latest one kicking off in April. Lawyers for Johnny allege that Amber is making up claims about his abusive behavior to ruin his reputation while Amber’s attorneys claim that Johnny was abusive during their relationship.