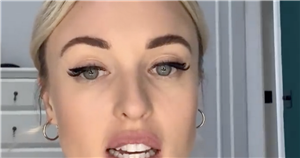 Jorgie Porter has revealed that her miscarriage with quadruplets has been 'the hardest thing' she has 'ever had to come to terms with'.

The 33 year old, who suffered a miscarriage August of this year with boyfriend Ollie Piotrowski , took to Instagram on Sunday 21 November to discuss why she has not been active on social media because she 'finds it hard to not talk about things' as she is a 'really open person'.

Jorgie was pregnant with quadruplets when she miscarried, and she was told there no signs of life in the embryo sacs at a scan around 14 weeks into the pregnancy. Appearing casually dressed in a grey sweatshirt with her blonde hair worn up, Jorgie looked in calm as she explained how the past few weeks have been for her.

“This is probably the hardest things I’ve ever had to come to terms with and opening up about," she said.

“I’m lucky enough to be asked by Fabulous magazine to do a front cover which is coming out and I have been able to use that magazine to speak openly and really open up about what we’ve been through the last month.

“That’s why I’ve probably not been on social media as much because we’ve kind of had things back to ourselves and also I’m a really open person and I find it hard to not talk about things.” In a chat with The Sun's Fabulous Magazine, Jorgie said: "I’d not had any sign that things weren’t OK. No pain or bleeding, I was getting bigger, my boobs were growing, I had so much hair on my body and I still felt pregnant.

When the consultant performed the scan then said: ‘You’ve miscarried,’ I was in total shock.”

Jorgie was given a care package with four teddy bears in a very touching gift from nurses, after having a procedure to have her uterus cleared. Jorgie told Channel 4 bosses she was pregnant before her 12-week scan due to her bump, and said they were "so supportive."

The star wasn't sure she wanted to be a mum but seven months into their relationship things changed.

"Ollie said he could see himself having children with me, and it was a big moment, because I felt like I absolutely wanted children with him, too," the beauty revealed. Jorgie has said the tragic experience has made her feel closer to boyfriend Ollie and has since thanked her friends and family for their support also during this trying time in her latest Instagram post.

She penned: “Today I’ll be turning my phone off as we’re gunna spend time together probs climbing a mountain…I hope now anyone who I haven’t been in touch with will understand it’s been immensely hard and complicated times all my love x x x.”