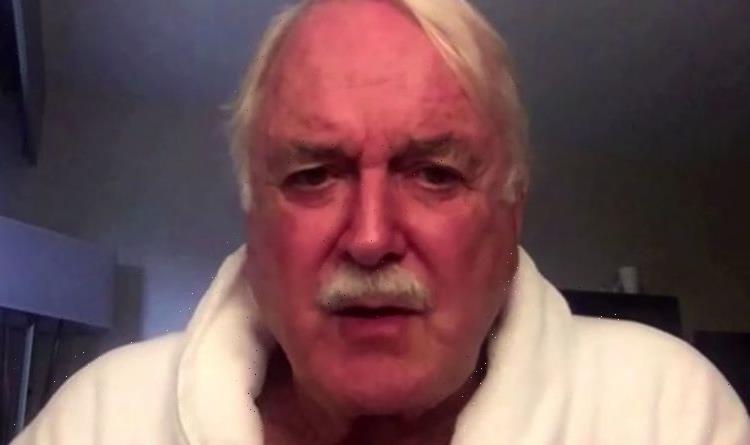 On Saturday, the star took to Twitter to deliver a “woke joke” to his 5.6 million followers. Mr Cleese sarcastically wrote: “A man walks into a bar. The bartender says ‘are you racist?’ “The man says ‘absolutely not. I abhor every form of racism’. The barman says ‘I’m with you there 100 percent’.

The comic added: “Not hilarious but in no way problematic. (And, I promise, NOT a pro-racist statement).”

The Monty Python star received a barrage of criticism with author James Felton commenting under the tweet: “You know there are plenty of jokes where nothing racist happens right John.”

Twitter user Eve6 added: “This is the part where you’ll confuse people telling you your commentary is dumb and boring with being cancelled.”

Meanwhile comedian Rhys James, best known for his regular appearances on Mock the Week, quipped: “Gender representation in this joke is appalling”.

Last week, Mr Cleese cancelled an appearance at Cambridge University after art historian Andrew Graham-Dixon, who was a visiting speaker, was banned for doing a Hitler impression.

The comedian, who claimed he had done a similar impression on Monty Python, said he was “blacklisting myself before someone else did.”

Mr Cleese has long been vocal in his criticism of cancel culture and last year took aim at “woke” comedy after the BBC Studios-owned broadcaster UKTV removed an episode of Fawlty Towers from its back catalogue.

UKTV removed ‘The Germans’ from its Gold Box Set of programmes as it contained “racial slurs”.

Mr Cleese, who co-created and starred in Fawlty Towers between 1975-1979 was deeply critical of the move, and insisted that cancel culture took the “fun” out of life.

He told the Straits Times in July last year: “I think that they misunderstand one of the main purposes of life which is to have fun.

“What you have to realise about humour is that it’s true to say that everything humorous is critical.

“If you have someone who is perfectly kind and intelligent and flexible and always behaves appropriately then they’re not funny.

“Funniness is about people who don’t do that like Trump, or somebody who’s programmed either to fawn to people or look down on them like Basil Fawlty ‒ there’s no flexibility.”

UKTV’s decision came after Netflix and other streaming platforms took down show’s such as ‘Little Britain’ because they featured performers with blackface.

The Black Lives Matter movement, which at the time was propelled into the public discourse after the murder of George Floyd by a US police office, forced streaming platforms and broadcasters to reconsider issues of discrimination and equality.

Mr Cleese, who was supportive of Black Lives Matter’s mission, added: “This very small group of people who are super-sensitive, maybe they should be working on their own emotions.

“My mentor Robin Skynner, the psychiatrist, once said if people can’t control their own emotions they have to control other people’s behaviour.

“There is an enormous amount of stuff out there on television I found deeply objectionable but I would never think of asking anyone to stop it.”

The PA news agency reported last week Mr Cleese was due to visit Cambridge as part of a documentary he is making on “woke culture”.

In turn, certain members of the public have branded the comedian’s self-cancellation as a form of promotion for the documentary.

Meanwhile Mr Graham-Dixon on Monday issued an apology for offence he may have caused by his Hitler parody, and said he had been trying to persuade the audience “that bad taste and bad morality often go hand-in-hand.”

In a letter published on Facebook, he added: “The speech I gave was a strident attack on Hitler’s racism and antisemitism.

“I apologise sincerely to anyone who found my debating tactics and use of Hitler’s own language distressing; on reflection I can see that some of the words I used, even in quotation, are inherently offensive.”