Diplo Opens a New Window. posted video from the couple’s nuptials in front of an Elvis Presley impersonator dressed in a red jumpsuit.

The Game of Thrones star, 23, wore a white ensemble complete with a veil while her groom, 29, was dressed in a dark gray suit and white shirt for the ceremony, where country stars Dan + Shay played their hit “Speechless” as Turner walked down the aisle.

According to online records, the pair applied for a marriage license earlier in the day in Clark County, Nevada.

The couple, who were first linked in fall 2016, announced their engagement in October 2017 with matching photos on Instagram that showed off the British star’s stunning pear-shaped diamond engagement ring. “I said yes,” she wrote on her post, while the DNCE frontman captioned his, “She said yes.” Joe’s father, Kevin Jonas Sr., commented on Turner’s post writing, “We are so happy to welcome you to our family.”

Us Weekly previously reported that the pair were set to wed in France this summer, so it’s likely that they will follow in his brother Nick’s footsteps and have more than one ceremony, as the Jumanji actor did when he wed Priyanka Chopra Jonas Opens a New Window. in India in December.

The Camp Rock actor jokingly said earlier this month that he had learned something important from their wedding.

“I mean, we are getting married in France, so a lot of Coors Light is necessary,” Joe said during an interview on the Zach Sang Show. “Not hard, really, to get that, but we needed to make sure that was going to happen.”

“We learned a lesson from my wedding,” Nick added. “Our friends drink a lot of beer, specifically, and we ran out of beer at the wedding, at my wedding, which was a big issue.”

Scroll down to see pics from Joe and Turner’s surprise nuptials! 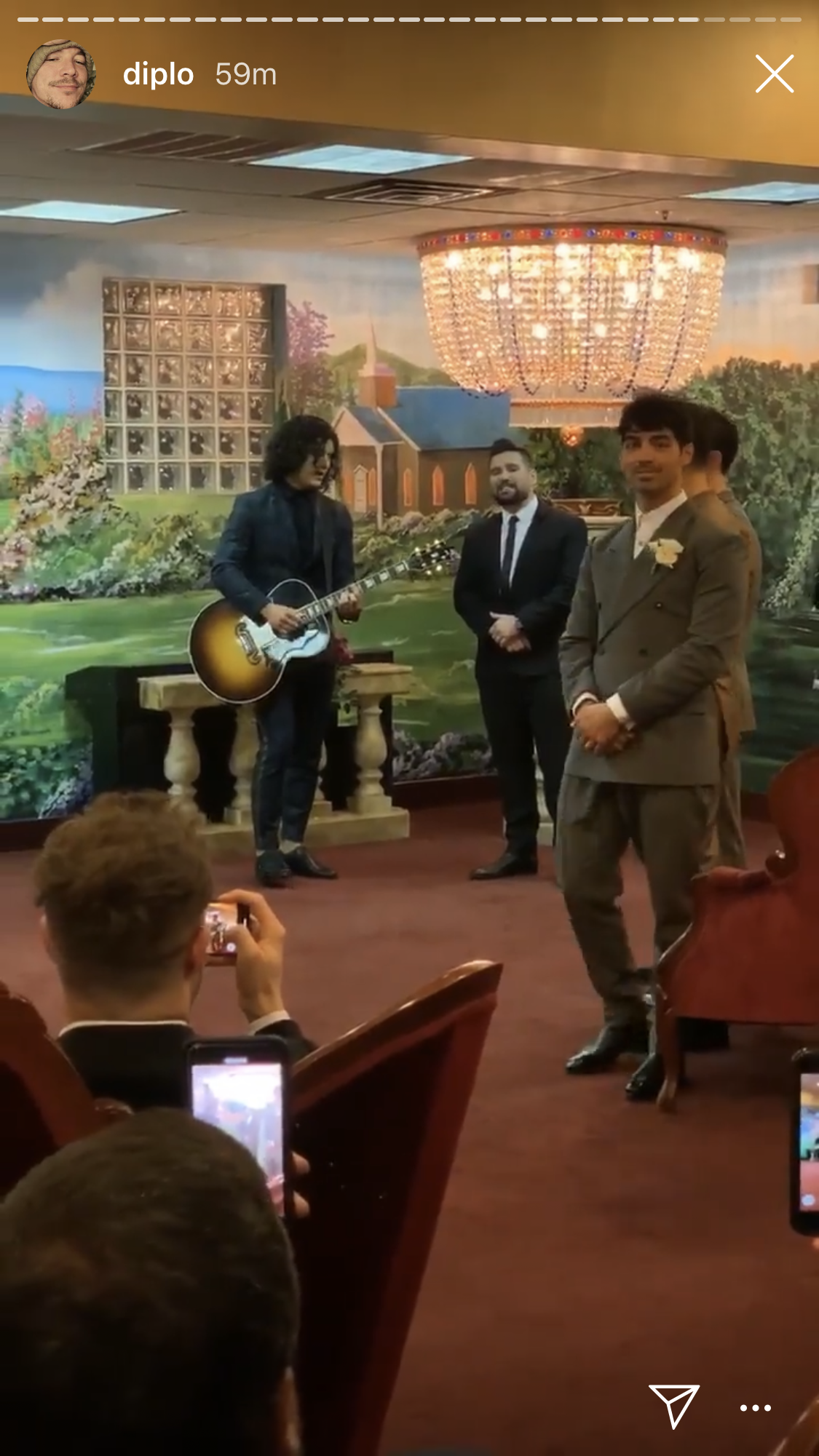 The groom smiled as Dan + Shay played their hit. 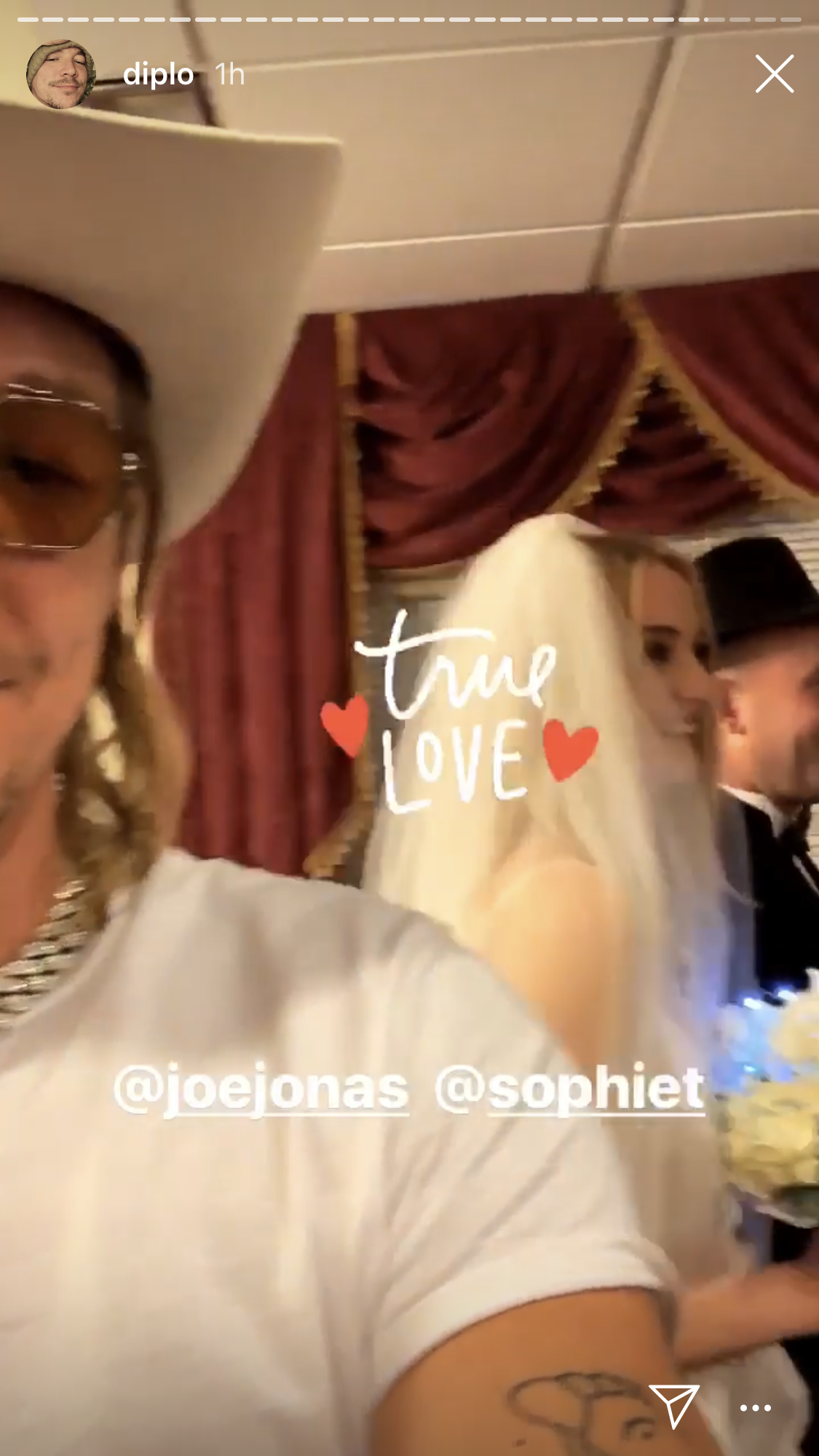 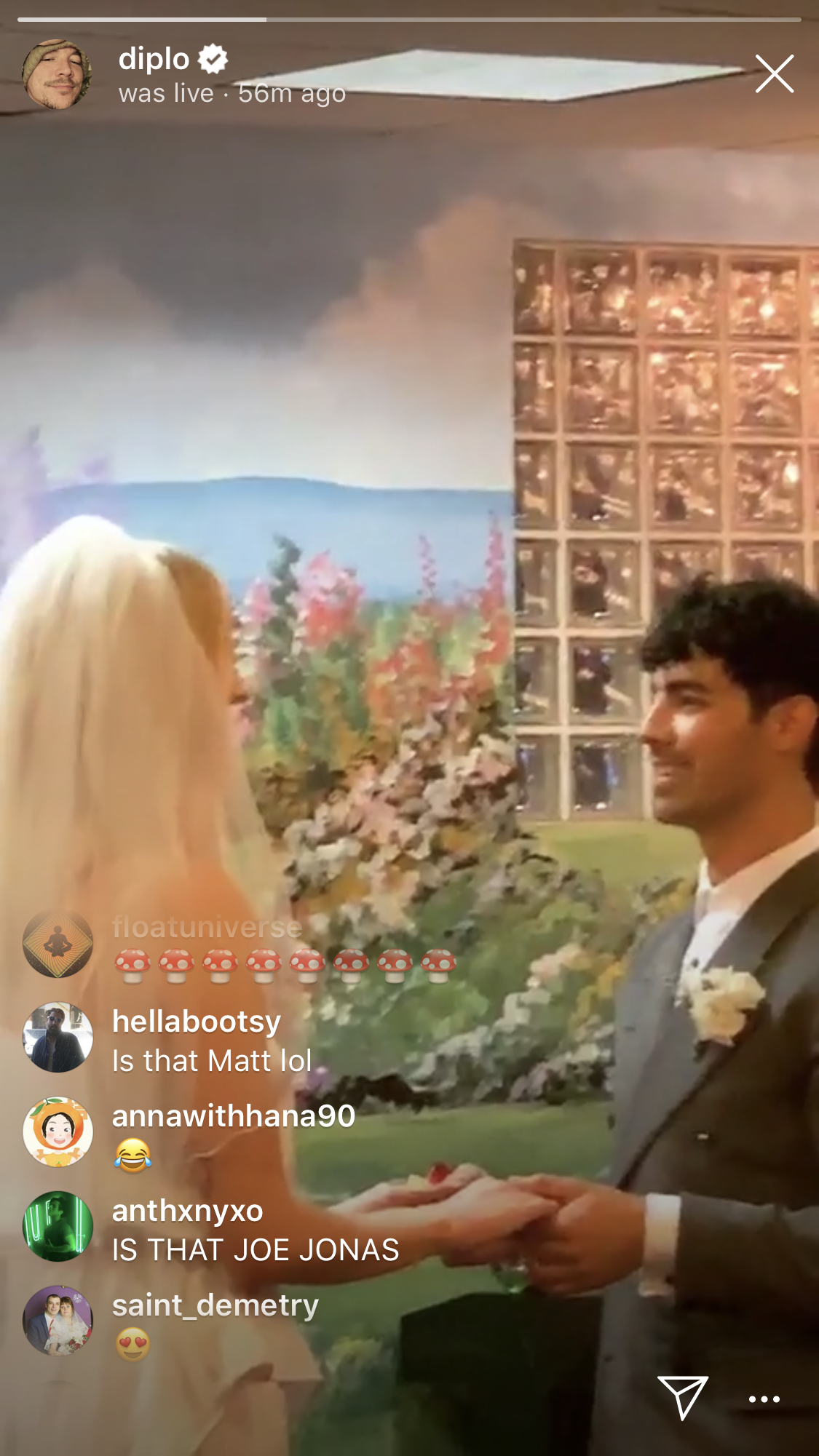 “I, Joseph, take you, Sophie, to be my wedded wife,” the “Cake By the Ocean” singer repeated after the celebrant. “With this ring, I thee wed and I love you and I thank God he gave me you,” he continued as he kissed his bride on the ring finger. 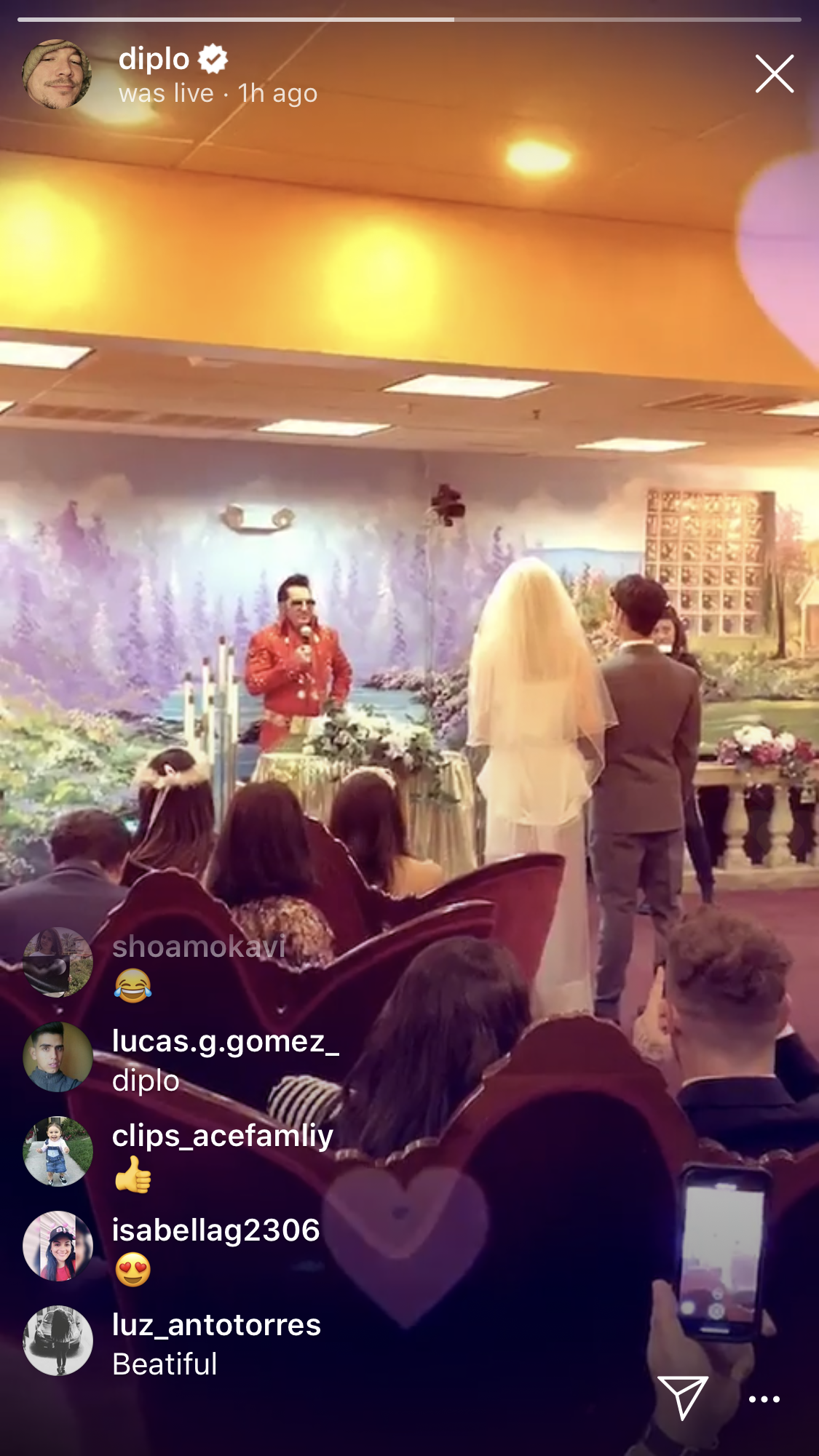 “I promise you I will never leave you, I will love and trust you all the days of my life, in sickness and in health, in plenty and in want, forever and ever,” the couple said in their vows. 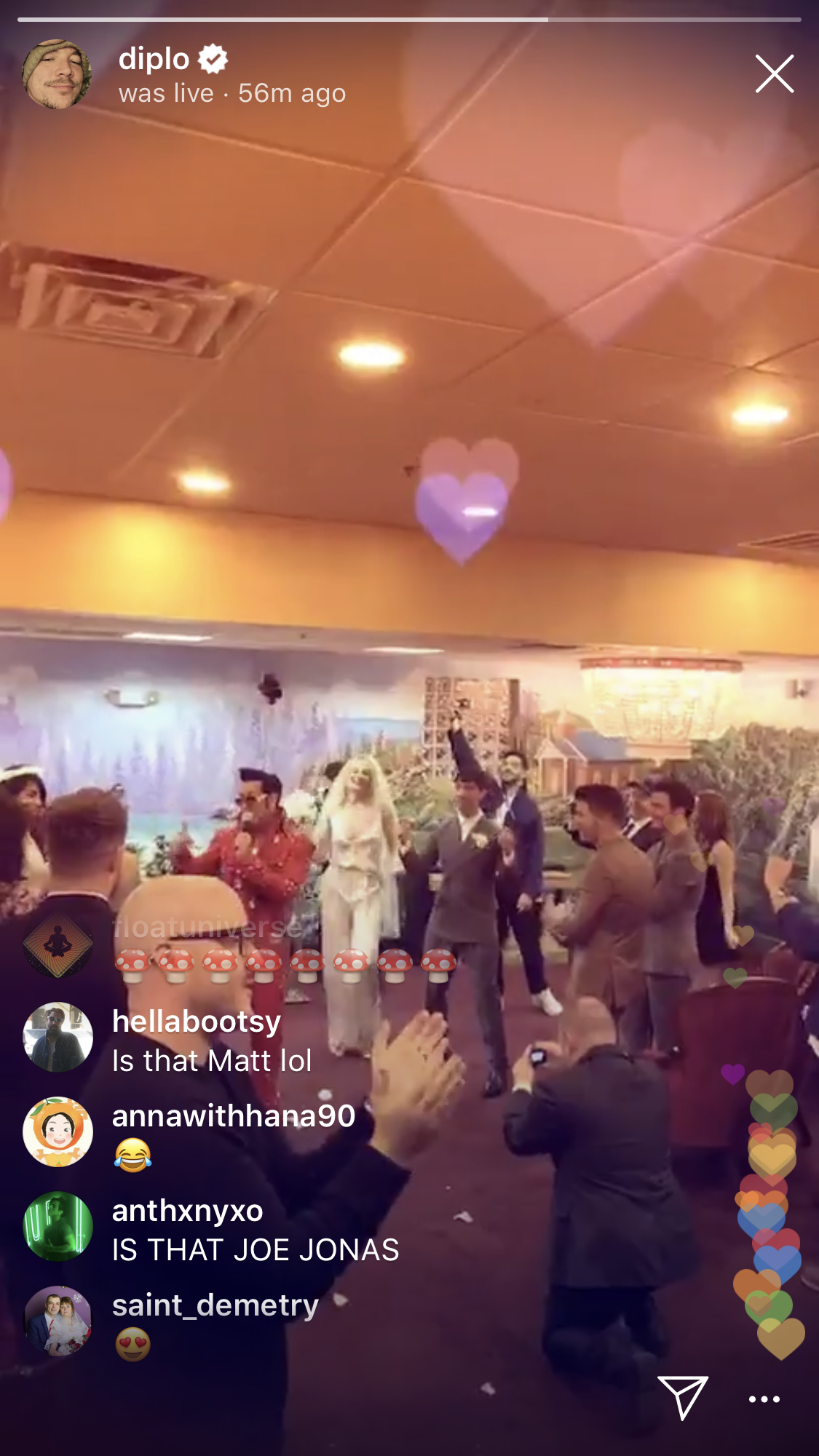