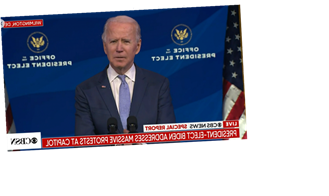 President-elect Joe Biden is calling for peace. Biden spoke out as Donald Trump supporters stormed the Capitol in Washington, D.C. on Wednesday, breaking barriers, windows and taking over the building.

“President Trump, step up,” urged Biden in his address from Wilmington, Delaware, adding that the “the scenes of chaos in the Capitol do not reflect true America.”

“The scenes of chaos in the Capitol do not reflect true America, do not represent who we are,” he expressed. “This is not dissent. It’s disorder. It’s chaos. It’s bordering on sedition. And it must end, now. I call on this mob to pull back and allow the work of democracy to go forward.”

Thousands headed to the Capitol building while lawmakers were gathered inside to count the Electoral College votes certifying President-elect Joe Biden’s win. As things began to worsen with people getting inside the building, and one person reportedly shot by police officers, according to CBS News, Trump eventually called on the National Guard.

Moments after Biden made his public address, Trump then took to Twitter to post a video, telling his supporters, “You have to go home now, we have to have peace.”

Vice President Mike Pence also urged people to leave and stop the protests, tweeting, “The violence and destruction taking place at the US Capitol Must Stop and it Must Stop Now. Anyone involved must respect Law Enforcement officers and immediately leave the building.”

“Peaceful protest is the right of every American but this attack on our Capitol will not be tolerated and those involved will be prosecuted to the fullest extent of the law,” he added.

Meanwhile, celebrities like Chris Evans, Cardi B, Dwyane Wade and more have expressed their thoughts and frustrations on the matter.