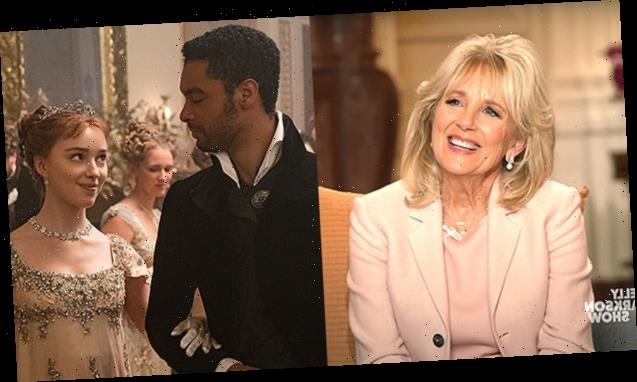 While appearing on ‘The Kelly Clarkson Show,’ First Lady Jill Biden revealed that she indeed watched the steamy ‘Bridgerton’ scene where Daphne and the Duke consummated their marriage.

Lady Whistledown can put this down in her newsletter: First Lady Jill Biden watched the steamy scene between Daphne Bridgerton (played by Phoebe Dynevor) and the Duke of Hastings (played by Regé-Jean Page) on Bridgerton. Season one of the hit Netflix series, which revolves around Daphne and the Duke’s love story in 19th-century Britain, came up during a game on the Feb. 25 episode of The Kelly Clarkson Show. Host Kelly Clarkson read out a series of words and phrases and Jill had to say the first thing that came to mind.

When Kelly read out “Bridgerton,” though, Jill’s mind didn’t immediately travel to that NSFW scene between Daphne and Simon. “Um costumes, romance,” Joe Biden‘s wife immediately said. This drew a chuckle out of Kelly, who was thinking of a scene that was indeed romantic…but where costumes came off.

“We’re so different, my first would’ve been different…,” Kelly said, laughing. Jill quickly caught on and said while laughing, “Okay I know what episode you’re talking about!” Kelly then clarified that they were giggling over episode five ([SPOILER ALERT]: this is the episode where Daphne and Simon quickly tie the knot and later have sex for the very first time).

Jill and Kelly’s chat about Bridgerton‘s steamy scene came in good timing, because the show’s intimacy coordinator recently did a headline-making interview about how the risqué scenes in the show are actually choreographed! The coordinator, Lizzy Talbot, also revealed that the famous oral pleasure scene in the show was filmed on “day one” of shooting.

“The very first scene, day one, we were doing a scene of female sexual pleasure in a gentlemen’s club that didn’t allow women in until 1980. It was, like, ‘Oh, I see what you’re up to, Shondaland!’ It was very clear that from the outset this was going to be viewed from the female perspective,” Lizzy told The Sunday Times in an interview published on Feb. 26.

Bridgerton premiered on Christmas day in 2020, and the series — which is executive produced by Shonda Rhimes — was met with much fan fare. Fans are now anxiously awaiting the second season of the show, which Shonda tweeted in January will be “coming soon.”