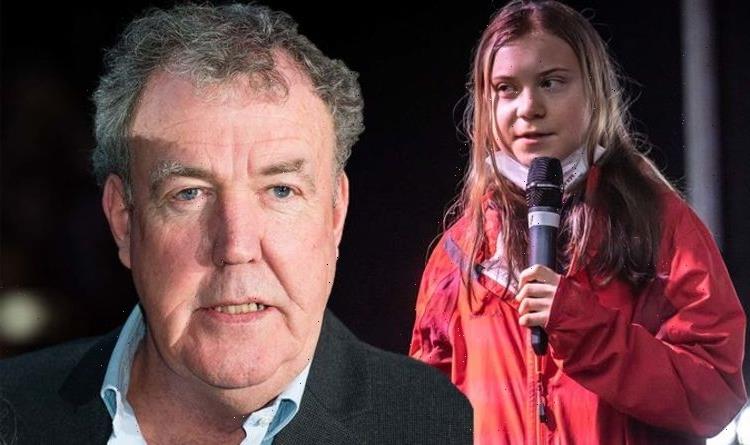 Jeremy Clarkson, 61, has branded Greta Thunberg and Extinction Rebellion’s protests “timid and wet”. The broadcaster and former Top Gear presenter took aim at the climate activists in his latest column.

The scathing piece comes after Greta denounced the COP26 climate summit in Glasgow in front of thousands of protesters.

The teenager referred to the event as a “failure” as she addressed demonstrators who marched to George Square.

She said: said: “It is not a secret that COP26 is a failure.

“It should be obvious that we cannot solve a crisis with the same methods that got us into it in the first place.”

She said: “We need immediate drastic annual emission cuts unlike anything the world has ever seen.

“The people in power can continue to live in their bubble filled with their fantasies, like eternal growth on a finite planet and technological solutions that will suddenly appear seemingly out of nowhere and will erase all of these crises just like that.

“All this while the world is literally burning, on fire, and while the people living on the front lines are still bearing the brunt of the climate crisis.”

Now, Jeremy has used his Sunday Times column to criticise the Swedish activist and the Extinction Rebellion activists, whom he referred to as “halfwits”.

He claimed that Extinction Rebellion protesters “go to the middle of London to tell Barnes people in Teslas to be more green, rather than going to the slums of Calcutta, where two million people, living in poverty, cook their supper every evening on chulha stoves, which blanket the city in a thick yellow fog”.

Jeremy added: “This is why they’re not protesting in countries where protest might do some good: because they’re timid and wet.

“Greta turns up in Glasgow so she can bathe in some adulation for a few days, rather than be sent to a labour camp for a few decades.”

The broadcaster continued: “That’s what these protesters need to get through their knitted hats and into their thick skulls: that if you want to get something done, and I mean really done, you’ve got to be uncomfortable.

“And you’ve got to be surrounded by people who don’t like you, not those who do.

The presenter has previously been vocal about his disapproval of Greta over the years.

The TV star was promoting Amazon Prime Video’s The Grand Tour when he lambasted Greta in 2019.

Speaking on Australian TV show Sunrise, Jeremy said: “No, I would never align myself with her.

“No, I think she needs to get back to school and shut up. So, I am not aligned with her.

“I simply reported on what we saw, which was not much rain in Cambodia.”