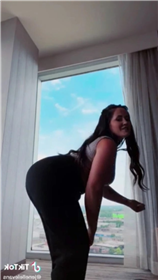 As far as we can tell there are two big reasons that Jenelle Evans loves social media:

1. It’s a free way to alleviate the boredom of unemployment.

2. It provides her with the illusion that she’ll one day be famous again.

If Jenelle can delete the negative comments fast enough, she might be able to convince herself that she’s well-liked — or that she has any shot in hell of one day returning to television.

It’s for this reason that she’s gravitated away from Instagram and Twitter and toward TikTok, where the average user is young enough that they may not remember some of Jenelle’s most horrific behavior.

But even on more youth-oriented platforms, Jenelle’s followers are catching on to the fact that she’s not exactly role model material.

Last week, Jenelle traveled to Nashville to make an appearance on a web series hosted by Candace Owens.

Evans uploads a lot of content in a typical week, so it’s not surprising that she took advantage of the change in scenery and posted some hotel room dances.

It’s the sort of thing she’s been doing for months, but this time, things were different.

In fact, we witnessed what might be the end of Jenelle’s love of TikTok.

Viewers were less than impressed with Jenelle’s dance moves, which mostly consisted of her twerking in front of a large window.

Hilariously, it was a one-word comment that really got Evans’ goat.

When a follower wrote simply “no,” Evans lost her cool and went to the person’s page with the intention of talking some trash.

But in the end, all she could manage was some lame attempt at bulllying that had something to do with this user’s self-esteem.

“You have no confidence. It shows in your video,” Evans wrote in a lame attempt at roasting the commenter.

She probably should’ve saved her energy, because the burns got much more intense from there.

“I was the captain actually,” Jenelle replied, adding:

“I would have made you run laps.”

Now, this led users to delve into Jenelle’s past in an attempt to find out if she was actually the captain of her cheer squad in high school.

To the surprise of absolutely no one, they concluded that she was lying.

We haven’t conducted our own research on this, so we can’t say for certain that Jenelle is lying about being the supreme cheerleader in her high school.

But if we had to guess, we’d say she’s probably full of it.

It’s important for us to note, however, that that guess has nothing to do with Jenelle’s dancing skills and everything to do with the fact that she lies about as casually and constantly as most people draw breath.

In other words, if Jenelle tells you it’s raining outside, you should probably grab your sunblock.

And even if this is one of the rare cases in which she’s telling the truth, we still don’t feel bad for doubting the gilr who cried wolf.

After all, she should really be more careful about that sort of thing.

We all know what sort of bloodshed ensues when someone spots a rogue animal on The Land.