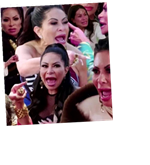 The premiere season of The Real Housewives of Salt Lake City was a hit.

Despite a minor scandal early on, Jen Shah was one of the standouts from the series.

But her toxic behavior on-screen earned her condemnation.

And new, leaked behind-the-scenes audio reveals that she’s even worse off camera.

In this audio recording, you are going to hear vicious yelling.

No one, under any circumstances, should be subjected to this kind of verbal abuse.

To say that it is a challenge to make out what Jen Shah appears to be saying, or to whom is an understatement.

Early on, however, she says “everyone other than me,” appearing to accuse someone of lying “this whole time.”

There is a tremendous amount of speculation as to the victims of the verbal assault.

Some believe that it may be production staff.

Jen certainly seems to mention “Bravo” during it, and was seen going off on producers at the spa.

Others believe that this is her verbally berating her Shah Squad.

Context clues suggest that either the people are her employees or she considers them to be such.

But everyone listening has their own thoughts. You’ll have to listen for yourself … just beware the yelling.

“I give you a place to lay your head,” Jen appears to yell at one point.

This has made some believe that she is yelling at her live in “help.”

Domestic workers should not under any circumstaces be berated or subjected to this.

As this audio circulated on social media this week, many of the responses were virtually the same.

Those who had watched Jen on RHOSL could not help but observe that, well, she’d been a lot like this on camera.

There is, however, a significant difference in yelling at fellow rich women for entertainment vs yelling at underlings who depend upon you.

Almost as prevalent in the replies were people noting how Jen had objected to being called “aggressive.”

“Aggressive” is a label frequently used to demean women of color (though specifically Black women) who are assertive.

Regardless of the word’s appropriateness for Jen, it’s clear that other words like “toxic,” “cruel,” “vicious,” and “unacceptable” apply.

Some noted that, if Jen was yelling at production in this moment, she might want to rethink herself.

Producers — including those on Bravo — have sought and exacted revenge upon reality stars for far less.

Jen could suffer anything from an unflattering edit to more leaks like this one, even more embarrassing ones.

No matter who was the target of Jen’s verbal abuse here and no matter who leaked it, some had questions about the audio.

A minority on social media found it “suspicious” that someone began recording here, wondering if they were trying to smear Jen.

To be fair, audio has been leaked out of context before … but what could possibly explain away or excuse this yelling? Nothing.

Sadly, our society does not yet possess the moral clarity to have made yelling illegal.

But there is never any excuse for verbal abuse, particularly directed at employees — afraid to even speak up.