Jeffree Star has been rushed to hospital after being involved in a ‘severe’ car accident, when his brand new Rolls Royce flipped multiple times after hitting black ice on the road.

The 35-year-old YouTube star and cosmetics mogul was travelling with his friend Daniel Lucas in Natrona County, Wyoming, when the crash occurred early Friday morning.

‘A few hours ago Jeffree and Daniel were in a severe car accident and the car flipped 3 times after hitting black,’ an update on Star’s social media page read.

‘We will update you all when the doctor gives us more info. So thankful they are both alive.’

The update was posted to the influencer’s Instagram Stories on top of a photo showing Star in a neck brace laying down on a hospital bed. 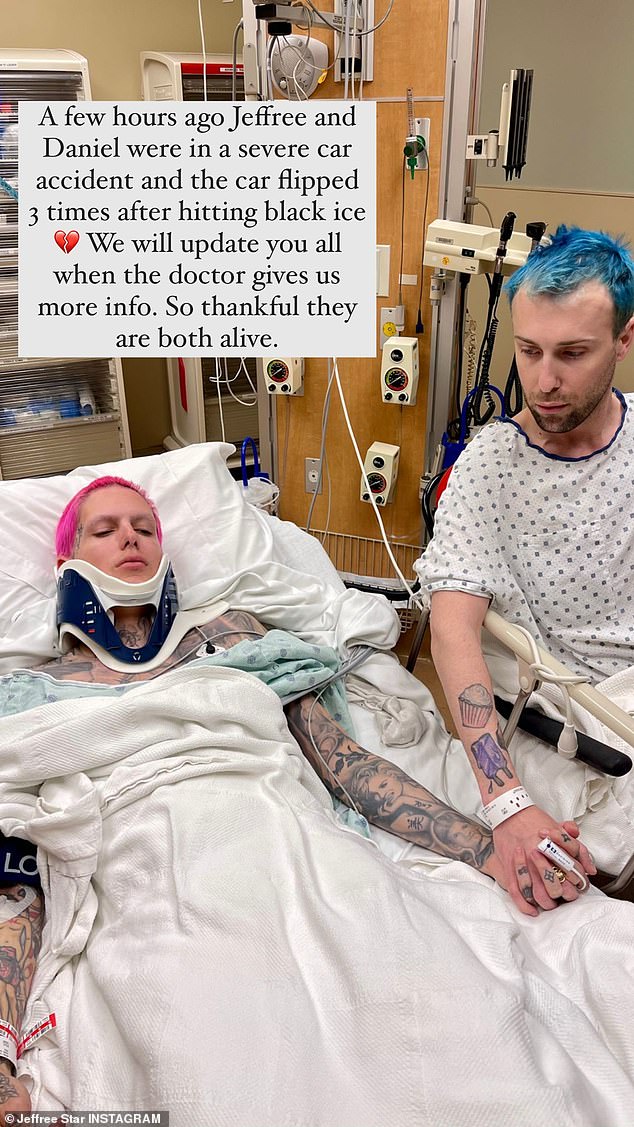 Crash: Jeffree Star involved in ‘severe’ car accident as YouTuber is hospitalized after vehicle flipped multiple times (he posted this picture on Friday following the incident) 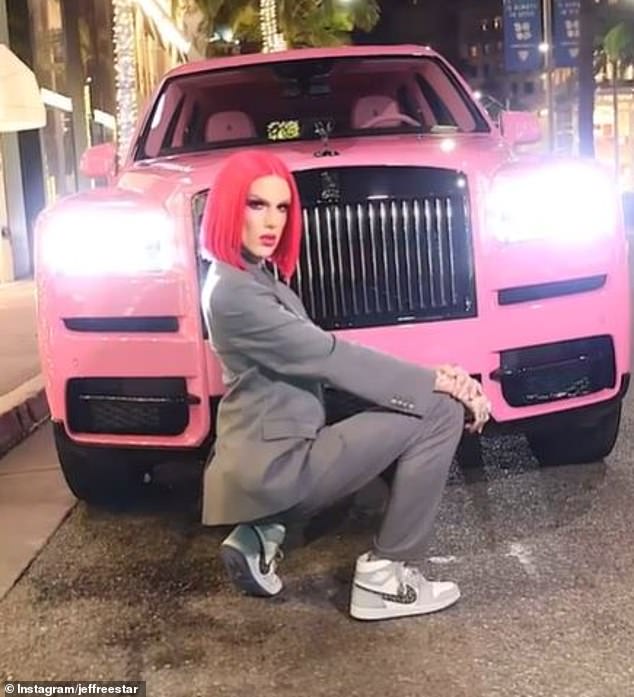 It’s believed Star was in his new $300,000 customized pink Rolls Royce, which he only acquired this past February. It’s unclear if he was behind the wheel of the luxury vehicle 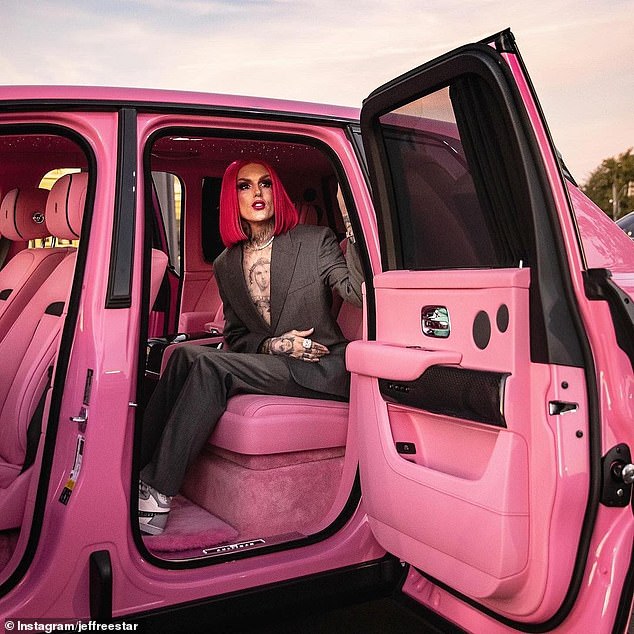 Star – real name Jeffrey Lynn Steininger Jr. – is based in Wyoming, where the crash took place, and has a net worth of over $200million thanks to his makeup empire

Star – real name Jeffrey Lynn Steininger Jr. – is based in Wyoming, where the crash took place, and has a net worth of over $200million thanks to his makeup empire.

According to radio station K2 Radio, the Wyoming Highway Patrol said his vehicle was was heading northbound on Hat Six Road in Natrona County when it hit black ice.

Both Star and his friend Lucas are currently being treated at Wyoming Medical Center.

It’s unclear which one of them was behind the wheel of the Rolls Royce at the time of the accident.

TMZ reports that drugs and alcohol do not appear to have been involved in the accident, however investigators are still considering whether speed was  speed was a factor. 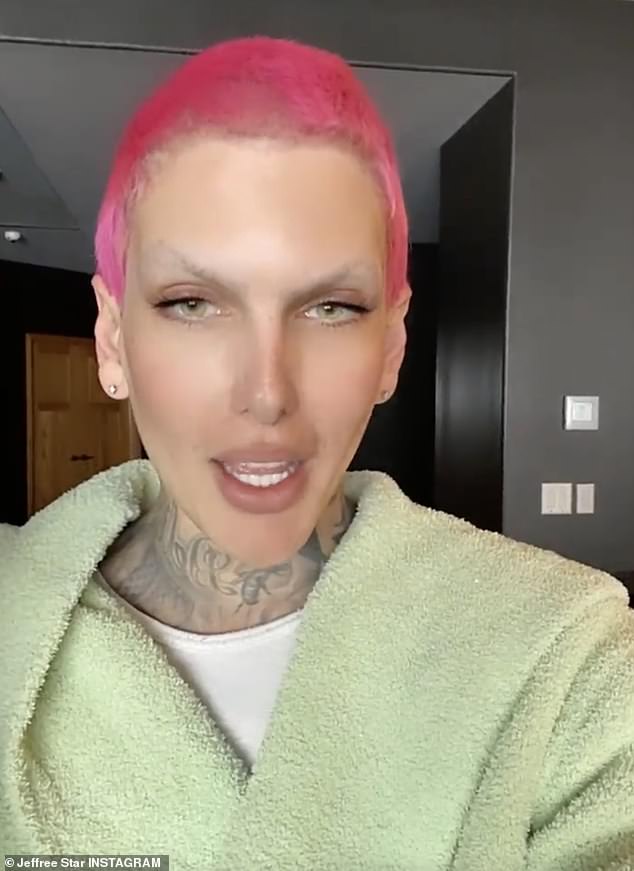 Thankful: The 35-year-old YouTube star and cosmetics mogul was travelling with his friend Dan Lucas when the crash happened according to an update on his social media page Friday

He first gained attention on MySpace, before sharing his makeup tutorials on YouTube where he quickly amassed millions of followers.

But while his career has brought him fame and fortune, Star has attracted a slew of negative headlines and has been accused of physical violence and sexual abuse.

Last October, the makeup mogul  was the subject of a lengthy report published by Insider, which featured interviews with insiders who claimed he ‘groped men around him without consent’ and used a stun gun to intimidate people in the late 2000s.

Star’s attorney denied the allegations in the article. 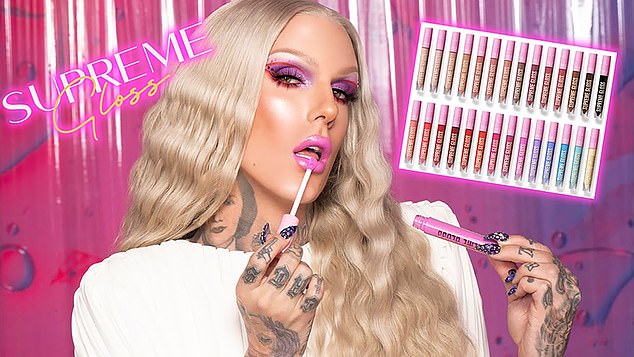 While his career has brought him fame and fortune, Star has attracted a slew of negative headlines and has been accused of physical violence and sexual abuse.

In one instance, five people alleged to Insider that Star tased a homeless teen, then-17-year-old Gage Arthur, after he rejected his advances in a movie theater in 2009.

Someone who claimed to be with them that night told Insider that Star said he wanted to ‘f**k Gage’ and tried holding the teen’s hand, even though he is straight.

After Arthur failed to reciprocate, Star reportedly walked out of the theater. When the group joined him in the parking lot, he allegedly chased the teen around a car and tased him.

Arthur told Insider that later that night, when he stayed over Star’s house, the MySpace celebrity ‘gave him Ambien until he was intoxicated and forcibly performed oral sex on him without his consent.’

Star’s lawyer called the allegations ‘false and defamatory,’ saying Star ‘has never tasered or drugged anyone for sex.’

‘I think anybody that has seen him in concert has seen that. That’s just part of his thing, feeling people up and groping people and a**-slapping and d**k-grabbing,’ he added.

Neil said he didn’t like how Star would pull young-looking fans on stage to feel them up and have three-way kisses. 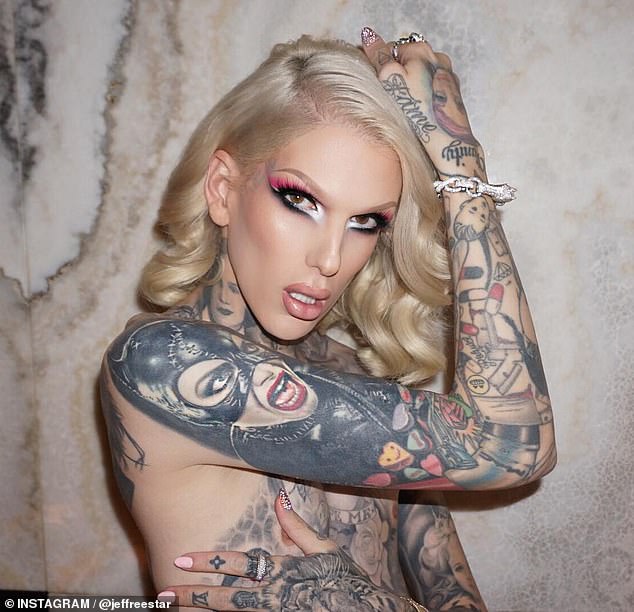 Hitting back: Star’s attorney denied the allegations, calling them ‘false and defamatory’

A spokesperson on behalf of Star told DailyMail.com: ‘While Insider may believe that generating click-bait is more important than honest reporting, facts still matter.

‘This so-called exposé is nothing but a defamatory collection of long-discredited allegations, misleading hearsay from more than a decade ago and outright lies. Tellingly, all of the key individuals involved have refused to substantiate Insider’s bogus claims, while many, including Jeffree’s representatives, presented the reporter with a mountain of evidence proving that these allegations are false.’

Star is no stranger to controversy, and earlier this summer, makeup retailer Morphe dropped his line because of his use of racist and offensive language in the past. 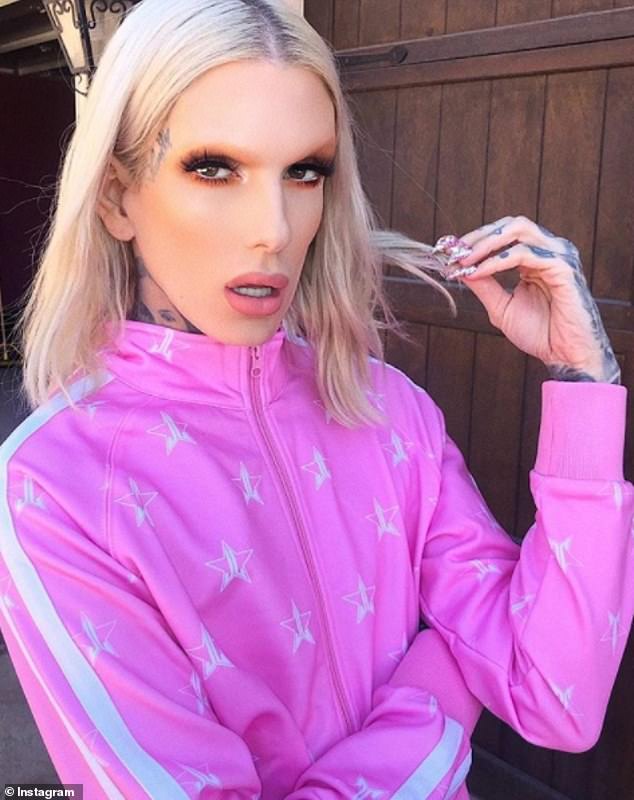 Serious allegations: YouTuber Jeffree start has been accused of physical violence and sexual abuse in bombshell report by Insider

Most recently, YouTube star Tati Westbrook accused Star and fellow influencer Shane Dawson of ‘using’ her in a plot to destroy the career of beauty guru James Charles by ‘manipulating’ her into making a video exposing his alleged predatory behavior.

Meanwhile, the wild headlines have continued into this year.

In February, Star denied outlandish rumors that he was having an affair with rapper Kanye West amid his divorce from Kim Kardashian.

He recently moved to Wyoming after listing his bubblegum pink ‘Barbie dreamhouse’ for near $3.6million in July last year. 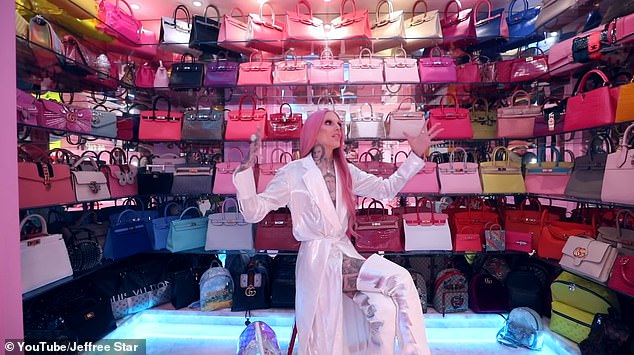 He recently moved to Wyoming after listing his bubblegum pink ‘Barbie dreamhouse’ for near $3.6million in July last year