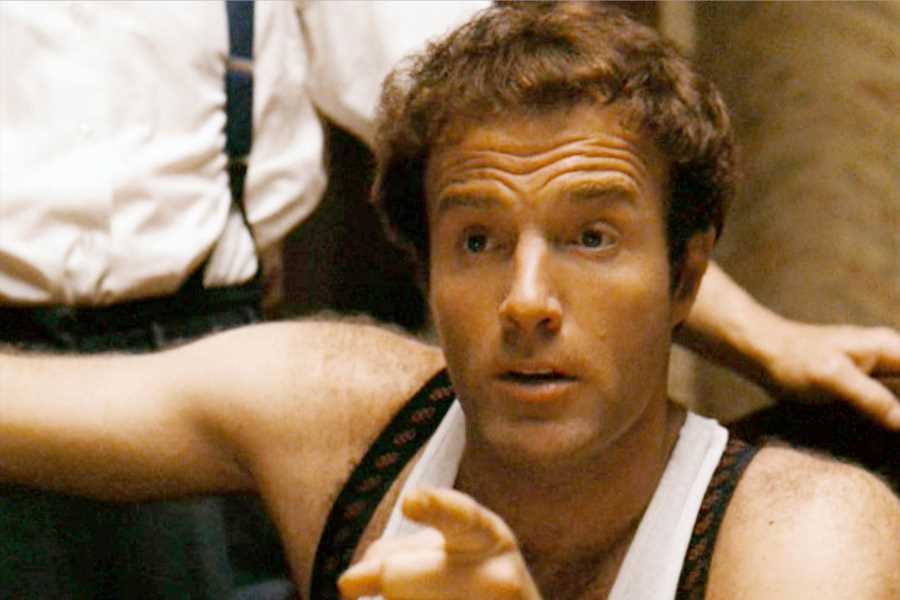 He was tough, he was sexy, and he was one of the most charismatic movies stars of the 1970s — he was James Caan, your go-to guy when you wanted someone who could be flinty yet charming, smooth yet volatile. A Bronx-born, Queens-raised actor who claimed he was the “only New York Jewish cowboy,” the former Michigan State football player got bit by the acting bug when he transferred to Hofstra University, and was already making the bit-player rounds on TV shows (Dr. Kildare, Combat!, Route 66, The Alfred Hitchcock Show) in the early ’60s. After director Howard Hawks cast him in two movies — Red Line 7000 (1965) and El Dorado (1966) — Caan started to attract attention as the next big up-and-comer. It wasn’t until the one-two punch of a TV movie about a gridiron hero and Paramount picture based on a bestseller about gangsters, respectively, that he became a bona fide star. Even when he showed up in his later years, usually as a crusty old guy for added color or the human embodiment of AARP-age machismo, Caan was still the kind of performer who stopped you dead in your tracks.

In honor of the late, great actor — who passed away last night at the age of 82 — here are 10 of Caan’s toughest, funniest, weirdest, wildest and most unforgettable roles, from The Godfather to Elf. Rest in power, Jimmy.

El Dorado (1966)
One of Caan’s earliest prominent roles was in this Howard Hawks-directed Western, where he plays a revenge seeker by the name of Alan Bourdillion Traherne — which is such a mouthful that he instead goes by Mississippi. Putting John Wayne and Robert Mitchum opposite Caan creates a fascinating portrait of Old Hollywood briefly crossing over with New Hollywood on its way out the door. And while Caan doesn’t exactly go Method in scenes with his aging co-stars, his line delivery and screen presence feel sly and modern, especially compared with Ricky Nelson essentially playing the same role in Hawks’ earlier Rio Bravo, of which El Dorado was an unofficial remake. (Well, mostly modern; there is an extremely unfortunate sequence — often deleted from TV airings — where Mississippi pretends to be a Chinese man.)

Brian’s Song (1971)
Before Sonny Corleone, Caan’s most iconic role came on the small screen, in this TV-movie about the friendship between Chicago Bears star Gale Sayers (Billy Dee Williams) and his dying teammate Brian Piccolo (Caan). Even by the standards of an era in which most viewers had four or five channels, Brian’s Song was a smash: nearly half of all television sets in use when it debuted were tuned in to watch Caan’s talkative Piccolo launch a charm offensive at the more taciturn and guarded Sayers. Because the relationship is so one-sided for so long, Caan’s sheer magnetism and verbal dexterity are essential to making the movie work, and to make all those viewers cry along with Gale Sayers when Brian dies at the too-young age of 26. Admit it: If you’re of the right generation, you’re hearing the Michel LeGrand score right now, aren’t you?

The Godfather (1972)
The making of Francis Ford Coppola’s Mob movie epic has become almost as much of a Hollywood legend as the film itself. And part of that legend is that Caan auditioned to play Michael Corleone, and that the studio wanted him to play the role (this was around the time Brian’s Song was an enormous hit).  Coppola had to fight hard to cast Al Pacino instead — but Caan wound up with more than a consolation prize, though. As Santino “Sonny” Corleone, eldest child of Marlon Brando’s Don Vito, Caan is an avatar for the way gangsters had been depicted in movies going back to the early talking pictures: arrogant, hotheaded, and easily prone to violence (as his sister Connie’s abusive husband Carlo found out). He is set up very much in contrast to Pacino’s more cautious and calculating Michael, and while it’s not hard to imagine Caan being interesting if the roles were reversed, it’s clear Coppola got the best out of both actors with this arrangement. After a famous death scene at the toll booth, Sonny makes a surprise return for the family dinner flashback that concludes The Godfather, Part II, as neither Coppola nor the audience were ready to let go of the character quite yet.

The Gambler (1974)
Caan seemed an odd choice to play the existentialist antihero of Fyodor Dostoevsky’s novel, about a gambling fanatic spiraling out of control. Until you factor in the “spiraling out of control” part, and then you realize what a genius casting move it was on director Karel Reisz’s part. Axel Reed, an English professor — with a penchant for lecturing his students on, yes, Dostoevsky — seems passionate but mild-mannered when he’s in the classroom. Get him near a blackjack table, a roulette wheel, or a sure-thing sports bet, however, and it’s like watching a shark smell chum in the water. Caan plays Reed with an intensity and a dread-inducing sense of desperation, especially when the gangster (played by future Goodfellas capo Paul Sorvino) he owes $44k to stops playing nice and starts threatening to break every bone in his body. It’s an incredible portrait of a man who can’t help himself, someone who’s irrevocably addicted to the rush of losing. And that thanks to Caan, that last shot of him mysteriously smiling at his slashed face in a mirror is a pitch-perfect Seventies downer ending.

Rollerball (1975)
In the year 2018, society is kept pacified by a violent sport known as “rollerball,” which involves roller skates,  motorcycles, metal balls and grievous bodily harm. And in the year 1975, the guy who could make audiences believe that the star athlete of that national past-time was someone who was brutish enough to thrive in the rink yet soulful enough to want out — that was Caan. His earthiness is what grounds Norman Jewison’s genuinely weird, sociopolitical nightmare, in which corporations rule everything and you have to dig through reams of digitized misinformation to find out what’s really going on. (It feels so prescient now, they could have called it Crystalball.) And you get an incredible sense of what a great physical actor he was in the gameplaying sequences, where you get the feeling he could hold his own in a real hockey-meets-gladiatorial-combat match-up. A classic of dystopic Seventies sci-fi, in no small part to its leading man.

Thief (1981)
Caan hung out with Chicago cops and trained with real safecrackers to play the title character in Michael Mann’s brilliant character study of a career criminal trying to go straight — he was a big fan of the director’s earlier movie The Jericho Mile and wanted to soak as much of this world’s atmosphere as he could, in order to do right by him. (He even managed to successfully open up a real safe on his own without stripping the drill.) The result is what’s arguably Caan’s single best performance from stem to stern, as compelling, spring-coiled and on the edge as The Godfather‘s Sonny. He’s talked about how he made the decision to not use contractions when Frank, the archetypical guy going in for one last big score, spoke; here was someone, he reasoned, who would be as precise and professional in how he spoke as he was on the job. It doesn’t work out that way, of course, any more than it works out for him and Tuesday Weld’s Jessie. That’s when Caan reminds you that few actors of his day could play a man on the edge better. He often talked about this was the movie he was most proud of. He had every reason to be.

Misery (1990)
The Eighties were a bit of a hit-or-miss period for Caan — due to various personal problems, including the death of his sister to leukemia and his increasing dependence on cocaine, he didn’t appear in any movies between 1982 and 1987 movie at all. Misery was his big comeback vehicle. In Rob Reiner’s 1990 adaptation of the Stephen King thriller, he plays bestselling novelist Paul Sheldon, who survives a car crash, only to find himself the bedridden prisoner of his most dangerously obsessed fan, Annie Wilkes (Kathy Bates). Paul is largely a straight man role, there to react to Annie’s increasingly disturbing (and then violent) behavior, and it was Bates who won the Oscar, while Caan was not nominated. But the humanity he invests in Paul, as well as his dawning realization of the nightmare in which he has become trapped, is crucial to making the whole enterprise work, leading to a much busier acting decade than the one that preceded it.

Honeymoon in Vegas (1992)
In 1990, Andrew Bergman directed The Freshman, a Matthew Broderick comedy whose chief conceit was casting Marlon Brando to play a Mob boss whom everyone in the movie could see looked exactly like, well, Vito Corleone. Bergman’s follow-up, Honeymoon in Vegas, doesn’t trade off of Caan’s image as Sonny Corleone in quite the same way. But the actor’s presence and reputation are crucial to making the story work both comedically and emotionally. Nicolas Cage and Sarah Jessica Parker are a young couple on their way to a quickie wedding; Caan as the professional gambler who sees Parker as the spitting image of his late wife and swindles Cage in a card game to get a weekend alone with her. The actor has to bring some air of menace for the whole thing to not feel too silly, but also modulate things enough that he doesn’t make the humor feel inappropriate. Cage wins back Parker by jumping out of a plane with a group of visiting skydivers, yet Caan manages to avoid being upstaged by the entire Utah chapter of the Flying Elvises.

Bottle Rocket (1996)
One of the hallmarks of the Nineties explosion of independent cinema was first-time filmmakers landing one big name — often one who was part of the early Seventies equivalent of that Nineties boom. For Wes Anderson and his off-kilter heist comedy, it was James Caan. He plays Mr. Henry, the alleged mentor to Owen Wilson’s hopeless dreamer Dignan. The older man helps train Dignan and his friends Anthony (Luke Wilson) and Bob (Robert Musgrave) to rob a cold storage facility, but while that caper is going awry, Mr. Henry and his crew are off robbing the home of Bob’s well-to-do parents. The joy of Caan’s performance is that he manages to play it both ways, so that you can see him stringing along these naive kids — and you can also see that he genuinely enjoys Dignan’s enthusiasm and the chance to expound on his craft.

Elf (2003)
Caan spent most of the mid-late 2000s starring in Las Vegas, a lighthearted throwback NBC drama where he played a casino’s security chief. He occasionally got to do films during that period, however — including the funniest of his career. In this fantasy-tinged Christmas story, Will Ferrell plays the title character Buddy the Elf, an orphaned baby who snuck into Santa’s sack and has been raised at the North Pole. Caan is Walter, the birth father who never even knew Buddy existed, and who does not appreciate this eccentric character’s arrival right as his publishing business is on the verge of falling apart. Ferrell understandably gets most of the laughs, but Caan gets the film’s big character arc, as Buddy forces cranky careerist Walter to better appreciate his family (yes, even including Buddy himself) and simple pleasures like singing a Christmas carol loud enough for all to hear.