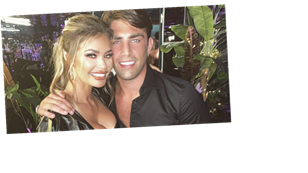 He's been linked with Chloe Brockett and Laura Anderson in the past, and now Jack Fincham has sent rumour mills into overdrive that he's dating TOWIE's Chloe Sims after a flirty exchange on Instagram.

The reality star, who was slammed by furious fans over his dog's clipped ears, uploaded a topless boxing picture on the social media platform and it wasn't long before the comments came flooding in.

In the snap, Jack, 29, is seen standing tall at the gym as he wears a pair of grey shorts and has a punching bag behind him.

He captioned it: "Train hard fight easy," alongside a boxing glove emoji.

Chloe, 38, commented with two fist emojis, with the Love Island star responding: "My back is the longest it's ever been your gonna love it," with a crying with laughter emoji.

The TOWIE star kept the flirty exchange going by adding: "All back no bottom," alongside four crying with laughter emojis.

The pair previously appeared on Celebs Go Dating together in 2019 and posed for a cosy snap together.

At the time Chloe's fans proceeded to beg the two to get together after insisting they'd make the "perfect couple".

The Essex native captioned it: "IF YOU DON'T HAVE ANYTHING NICE TO SAY… COME AND SIT WITH ME & JACK AKA STRING."

A follower commented: "Are you together? Hope so? Chloe is beautiful."

A second added: "You two look cute together, now that would be a power couple!!!," while a third wrote: "You would make a cute couple!!"

OK! online have contacted Chloe and Jack's representatives for a comment.

Chloe, 20, looked stunning as she showed off her ample assets in a khaki-coloured swimsuit, with a plunging V neckline.

Jack, who showed off his body transformation, was shirtless in the same location, drinking from a the same bronze-coloured wine glass as Chloe.

She commented on his photo and wrote: "Sort," while he said: "Yeah this works," on her glamorous snap.

The outspoken star then replied: "Too booby?," as they kept fans on their toes with the flirty banter.