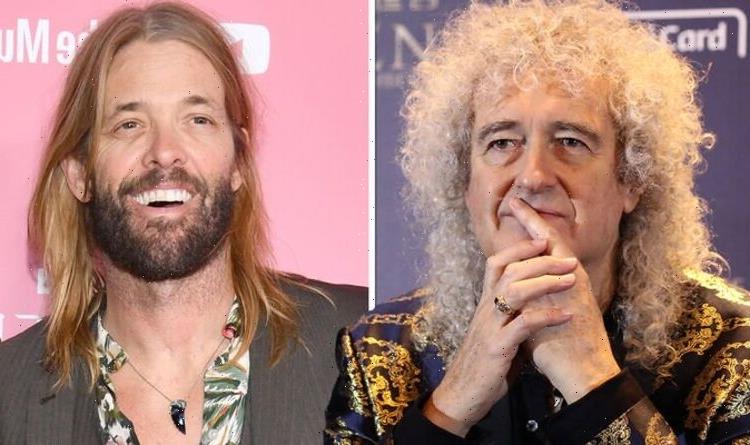 Foo Fighters drummer Taylor Hawkins’ death was confirmed in the early hours of this morning, with the music world paying tribute. Among those saddened by the news was Queen’s Brian May who took to Instagram to share his “heartbreak”.

Taylor’s death was confirmed by his bandmates in a moving statement.

Taking to their official Twitter, they shared that the drummer had died suddenly at the age of 50.

They wrote: “The Foo Fighters family is devastated by the tragic and untimely loss of our beloved Taylor Hawkins.

“His musical spirit and infectious laughter will live on with all of us forever.

“Our hearts go out to his wife, children and family, and we ask that their privacy be treated with the utmost respect in this unimaginably difficult time.”

Sharing his reaction, Brian posted a picture of the headlines on his Instagram earlier today.

Alongside these, he wrote: “No. It cannot be. Heartbroken.

“Taylor, you were family to us. Our friend, our brother, our beloved child.

Brian and Taylor worked together a number of times over the years.

He was a guest on Brian’s remastering of his solo album Back to the Light earlier this year.

Speaking to Express.co.uk earlier this year, Brian opened up about how “awesome” it was to work with him.

He said: “He’d never really done a studio session for someone else, so he was wired to the hilt – you could imagine.

“I mean, there is energy spilling out all over Surrey from this guy, incredible!

“I think he’s well represented on the track – it’s insane, the amount of energy on there.”

They also worked together on the track Holy Man, which was released back in 2019.

Following Brian’s touching tribute, many of his fans and friends shared their sadness over the news.

Fan Nate_j2764 wrote: “Brian this is some of the worse pain I’ve felt over losing a role model.

“I can’t even imagine what Dave is going through right now.”

Magnolia_stereos added: “So utterly devastated over this news!

“Hugs to you Brian and to Roger too! I know He was like one of your own!”

User Chadshlosser penned: “One of the best dudes in rock n roll.”