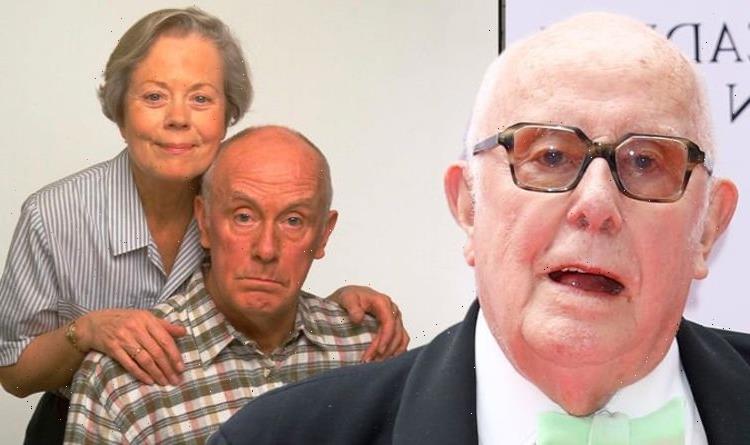 Jon Snow forces "I dont beleive it!" quote into interview with Richard Wilson

Richard Wilson, 85, had a heart attack five years ago and that saw him fall from a “little balcony”. The actor’s memory was affected, and he still has to walk with a walking stick, with the actor reflecting on the period in a new interview.

I was put on life support in intensive care.

Richard is most famous for playing Victor Meldrew in the BBC sitcom One Foot In The Grave.

Speaking to Saga magazine, the actor said: “I fell from a balcony when the heart attack happened.

“I hit my head, so my memory was affected to some extent because it caused a bleed on the brain.

“I was put on life support in intensive care. But as the Stephen Sondheim song goes ‘I’m still here!’.

He continued: “I’ve got a bit of a hip problem at the moment and I have to use a stick but otherwise I’m OK.

“Usually when you get to your eighties, you find it difficult to learn lines, but my friend Ian McKellen doesn’t and I’m the same.

“There are many things I forget, but not my lines.”

Richard also spoke on Times Radio recently about the long lasting impact that fateful day had on his life.

He said: “Steps are very bad for me now since my heart attack. So I use a stick quite a lot of the time.

“One of the things that strikes me is that, if I had died – and apparently at 80 you’re very close to death when you have a stroke and things – I realised I wouldn’t have known anything about it.

“I was rather upset that it was possible that I could die and not know anything about it.”

Richard had previously spoken about the serious event on BBC Radio 2 with Graham Norton.

The One Foot in the Grave actor said: “I’m going to mention it because I’d love to know who it was – the great thing about the accident is that there was a doctor walking by, and if he hadn’t been walking by, I wouldn’t be talking to you now.

Richard has lived alone for many years, and has even addressed this in an interview with BBC Radio 4’s Desert Island Discs in June.

He said: “I have lived alone for a very long time, and I quite like being alone at times.

“Every now and again, I feel I should have made a bit more effort to have a partner, but that never really worked.”

The 85-year-old became a household name in the early 1990s when he was cast as the discontented Meldrew, famous for his catchphrase: “I don’t believe it!”

But the actor said he initially turned down the role because he thought it would only appeal to older TV viewers.

He said: “Stupid to say, I don’t think I was ready to play old men.”

You can read Richard Wilson’s full interview in this month’s Saga magazine.