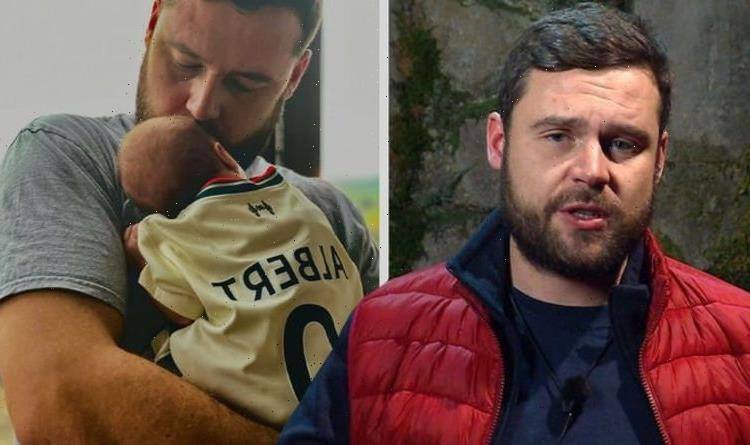 Danny Miller, 30, was crowned the first king of the castle on Sunday night, narrowly beating fellow camp mates Simon Gregson and Frankie Bridge in the 2021 I’m A Celebrity series finale. The Emmerdale actor has been a firm fan-favourite since his first appearance on the hit ITV reality show, but came under fire from viewers after they realised he had left his three-week-old son at home in order to take part.

I wasn’t financially set for that

But during his exit interview with presenters Ant and Dec, he revealed the heartwarming reason why.

“For you, the home sickness must have been intense!” Dec wondered about baby Albert and his fiancée Steph.

Danny chuckled as he nodded: “I did, but the whole reason is, make no mistake, I wanted to set him up for a good future.

“I wasn’t financially set for that.”

He went on: “This is an opportunity to do that and I wanted to showcase that and set them and my family up.

“I feel like I’ve done it and I’m proud of myself. I hope my family are proud too!”

Ant was quick to agree, as he said: “Oh they will be! They really will be.”

It comes after viewers branded him “out of order” for leaving Albert and Steph.

But before his stint on the show, he made his reasons for doing so very clear.

He told The Mirror: “Everyone is going to have their own opinion. The way I looked at it is, I made the decision once we found out we were naturally pregnant.

“We said, all these dates are now going to be aligned. I was asked back in February to do the show and once I’d said yes and everything had taken a turn. It wasn’t signed on the dotted line by any means, but there was a very good chance in February it would happen.

“[Some] people think it’s out of order, but there’s people who work for a less wage who have to go away and provide for their family who work in the Army, who don’t get contact and don’t get to see them for six months.”

He went on to explain that it’s “three weeks of my life and Albert isn’t really going to remember me being there or not”, and credited Steph for being an “amazing mum”.

“It gave me even more confidence to want to go to the castle and provide for the family,” Danny smiled.

“Alright, I’m not going to have that three weeks, but I’ll spend the rest of his life making that up to him.

“It’ll give me money to be able to do things with him that I wouldn’t have been able to do five or six years ago.”

He added that the sacrifice was an “easy decision to make” because Albert would be “in the best hands” whereas if the situation was the other way around, he wouldn’t be able to cope.

“I wouldn’t be able to do what Steph does,” he giggled.

“I can’t speak highly enough of her.’