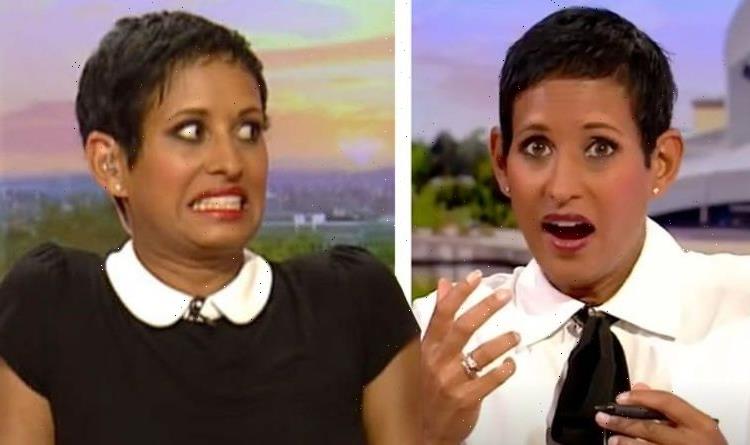 Naga Munchetty, 46, had to quickly correct herself yesterday morning after she accidentally referred to rugby sevens Team GB as England, during the Tokyo Olympics. The BBC Breakfast star realised her slip-up during a sports report on her Radio 5 Live show, and swiftly cleared up any confusion.

I didn’t mean that!

“Apologies everyone!” she began, stunned at her own mistake.

“I said England for the rugby…

“I didn’t mean that!

The rugby sevens will take place between July 26th and July 31st at the Tokyo Stadium, where two matches will be played a day over the six days, with the men’s competition taking place first, followed by the women’s.

The TV star referred to Alex as a “he” before being corrected by Andrew Henderson, Head of Athletics and Endurance Coach at Leeds Beckett University.

Naga began by discussing the most bizarre false start in the Olympics triathlon so far.

About 20 athletes had dived into the water to begin the race after hearing the starting klaxon at 6.30am – just as an inflatable boat carrying photographers drifted across the start line and stopped the rest of the 56-strong field going in.

To make matters worse, some ploughed on for another 150m until a speedboat carved through the waves and got them to stop.

Naga said on her show: “Let me go back to Andy Henderson, Andy, I explained what happened when the false start happened with Alex Yee, but you were talking about how that would have impacted them in terms of the energy that’s expended, the psychological build-up just starting.”

Andy responded: “I don’t think it affected them too much, it was almost like it was part of their warm-up process.

“Especially the guys who got to jump in the water, but I think it would have more of an impact for those guys who didn’t manage to get in the water but by the looks of it and the way things panned out.

“I think in the end it worked out OK for everyone.”

The BBC presenter went on to discuss Andy’s involvement with 800m athlete Alex.

She continued: “Now look you have not only been involved with Alex Yee, but also Alex Bell who is running the 800 metres, tell us about Alex, how you are feeling about his prospects?”

Not missing a beat, Andy corrected the 46-year-old on her use of pronouns, as he replied: “It’s a her, she’s running the women’s 800.”

Bell competes for Pudsey & Bramley Athletics Club and competed for the first time at the Great Edinburgh International Cross Country in 2018.