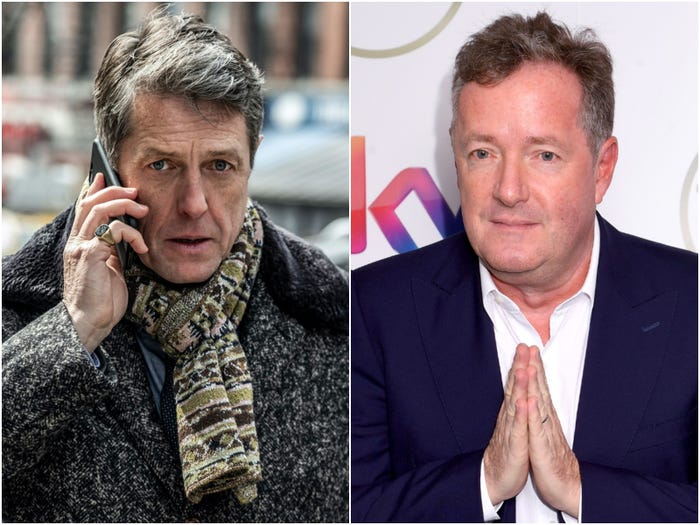 Hugh Grant broke down the series finale of his HBO TV show, "The Undoing," which British TV host Piers Morgan called "a bit lame" and said it only confirmed Grant as a "cheating narcissist."

The show, based on Jean Hanff Korelitz's 2014 novel "You Should Have Known," aired it's sixth and final episode on Sunday, but many were left unsatisfied at the ending. Spoilers ahead.

The series follows Nicole Kidman's Grace and Hugh Grant's Jonathan, a married couple in New York, in a whodunnit story where the latter is accused of murdering his secret mistress. Jonathan is adamant that he is innocent, and spends the majority of the series convincing his family and a courtroom that he didn't commit the crime.

However, it was revealed in the final episode that it was him after all. Grant spoke to Variety about the ending, and said that to make the series work, Jonathan "has to be as convincing as [he] can possibly make him when he's protesting innocence and his love for his wife."

Grant continued to say that he thinks Jonathan "is incapable of admitting he killed this woman — to himself, even."

"He's just so narcissistic that he believes the real him is the marvelous Jonathan, the star of medicine and great dad and great husband. I think he absolutely lives off adoration, undiluted, unequivocal love," Grant said.

Kidman's Grace takes the stand and reveals that when Jonathan was a child, he was looking after his 4-year-old sister only for her to get out of the house and get hit by a car. Grace says that Jonathan's mother told her that he showed no remorse or guilt about his sister's death.

It's this revelation to the court that nails Jonathan. The next day, Jonathan doesn't turn up to court and instead takes his son Henry (Noah Jupe) out of school and goes on a road trip to upstate New York. There, he stands atop a bridge aiming to kill himself.

Grant said: "He knows he's screwed by now and what I recall is he might be planning to jump off that bridge, he might not, but I think he wants to be the center of attention still. I don't think it's terrible news for him when all those helicopters appear overhead and the TV cameras and all that [show up]. He's a narcissist and that never goes away: If he's going to go out, he's going to go out in a blaze of glory."

Not everyone liked the ending of the show, with the word "disappointing" being used more than once in several reviews. Host of British morning show "Good Morning Britain," Piers Morgan, used another word: "lame."

"I was up very late last night watching 'The Undoing,' [it] was great. I thought the ending was a bit lame," Morgan said.

Morgan reignited the feud with the actor, which started in 2019 when Morgan criticized Grant and Steve Coogan for being vocal about their politics in the lead up to the general election.

"Who gives a flying f— what Coogan and Grant have to say about this election? Honestly, the stupefying pomposity of these clowns trying to thwart democracy is beyond parody," Morgan tweeted.

In response, Grant brought up Morgan's phone-hacking scandal, which occurred during his tenure as editor of British tabloid the Daily Mirror.

"You've changed," Grant wrote. "You used to care so much about what actors said that the paper you edited hacked Nigel Havers phone for years while his wife was dying of cancer."

While some fans thought the show's ending was disappointing, Grant and Kidman's performances have been widely celebrated. The duo will almost definitely be in the conversation for Golden Globe and Emmy nominations.