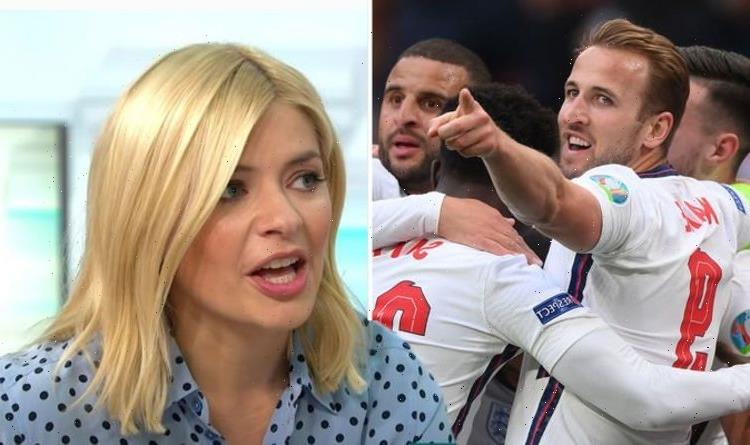 Holly Willoughby says her family is ‘divided’ over Euro final

Holly Willoughby, 40, said she and her husband Dan will be rooting for England at the Euro 2020 final, but her brother-in-law and mother-in-law will be cheering on Italy. The This Morning presenter discussed her family “divide” during a chat with resident chef Gino D’ACampo, who spoke live from Italy on the show. Gino said he couldn’t bring himself to watch the game as he supports both countries.

He went on to say his family are split by the remaining two teams playing against each other in the final.

Sharing her thoughts, Holly said: “My mother-in-law is Italian, so we are in exactly the same situation.

“Dan’s brother is definitely going on the Italian side, we’re on the England side.

“So, it’s really a divide between the families, but I think it’s a win win.”

Gino added: “I think England and Italy, they’re countries that love each other, so I hope the English fans at Wembley will be very nice to Italians, remember we are very nice people.”

After their interview, the presenter took to her Instagram page to share a selfie posing in her England top.

The blonde beauty smiled in excitement at the camera as she stood in front of a cardboard cut out of manager Gareth Southgate.

In view of her 7.2 million followers, she wrote: “Let’s go England!!!! #itscominghome #garethsouthgate.”

During Friday’s episode, Holly also made her predictions about the final with the help of a “psychic banana”.

The banana test consists of the host asking a yes or no question before cutting the piece of fruit’s tip off.

Holly explained to viewers that a dot means no, whereas a Y shape indicates a yes.

The latest test revealed a Y to viewers, meaning England will win the Euro 2020 final.

The mother-of-three said she swears by the trick, which she has been doing since school, and has not been wrong in the Euro so far.

England reached the final of the tournament after beating Denmark by 2-1.

It’s the team’s first major tournament final since they won the World Cup in 1966.

On Twitter, he said: “Hi there. I just wanted to take the time to say thank you to everybody for the incredible support we’ve received throughout this tournament.

“We hope that we’ve represented you in the right way. We hope that you’ve enjoyed watching us play.

“I’m very grateful to all of the players and the incredible staff I’ve got with me, that we’ve been able to get to our first final in 55 years.

“But of course we know now we’ve got to deliver for you, so we’ll be doing everything we can.

“Your support and energy has given us a huge lift, and I know it will on Sunday.”

England vs Italy kicks off at 8pm on ITV.