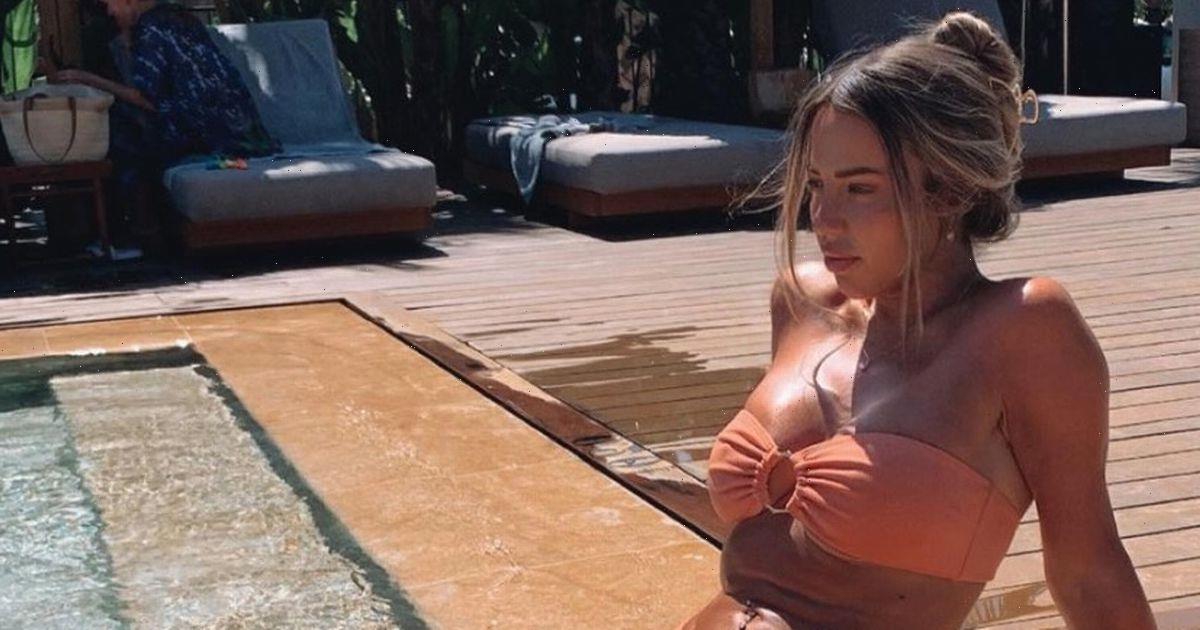 Holly Hagan has been showing off her tanned and toned figure as she enjoys her sun-soaked honeymoon with new husband Jacob Blyth.

The pair are sunning it up in Ibiza following their lavish nuptials earlier this month, which were attended by some of 29 year old Holly's former Geordie Shore co-stars, including pregnant Charlotte Crosby.

Looking like she was taking a moment to relax and wind down after the stress of wedding planning and the emotional day itself, Holly lounged by a pool and leaned back as she stared across the water. She donned an orange strapless bikini that showed off her tan from an extended period spent in Ibiza, and she wore her caramel tresses scraped back into a fuss-free bun, with a few tendrils left loose around her face.

Holly has been sharing plenty of loved-up content of the couple during their honeymoon, including one hilarious video that started with an image of the pair kissing, with a voiceover that said: "Aww, there's plenty of fish in the sea..", before it cut to a video of Jacob dancing around at a beach club, at which point the voiceover said: "Yeah but that's my clown fish – hands off my clown fish".

Holly wrote over the top of the video: "My hero".

Holly looked stunning on her wedding day, in exclusive images shared with OK! , first in a strapless number to say her vows, before changing into a beautiful embroidered semi-sheer gown

Her new husband Jacob, 29, wore a pale cream suit with a crisp white shirt as he cuddled his bride. Speaking to OK! , Holly said of their nuptials: “It was such a magical experience,” whilst Jacob added: “On that day I can’t tell you how I felt, it was crazy. It was definitely the best day of my life.”

Ibiza hold's a special place in the couple's hearts, after Jacob popped the question there in 2019. Holly announced her engagement to her beau in 2019 with a loved-up snap of the pair in Ibiza, where they had gotten engaged a few weeks prior to her post.

The pair could be seen embracing and kissing next to the sea, and Holly captioned the snap: “IM GUNNA BE A WIFE!

“Swipe for the video of the best moment of my life. I can’t believe I’m actually writing this, or that we and everybody else managed to keep it a secret for the last couple of weeks.

“But on our second anniversary on the island where we first met, the love of my life asked me to be his WIFE!!

“I was honestly in shock, I believed for such a long time that I didn’t deserve to be loved, But I was so wrong. Jacob is everything I was told I didn’t deserve and more. He’s the most patient, caring and laid back person I’ve ever met.”