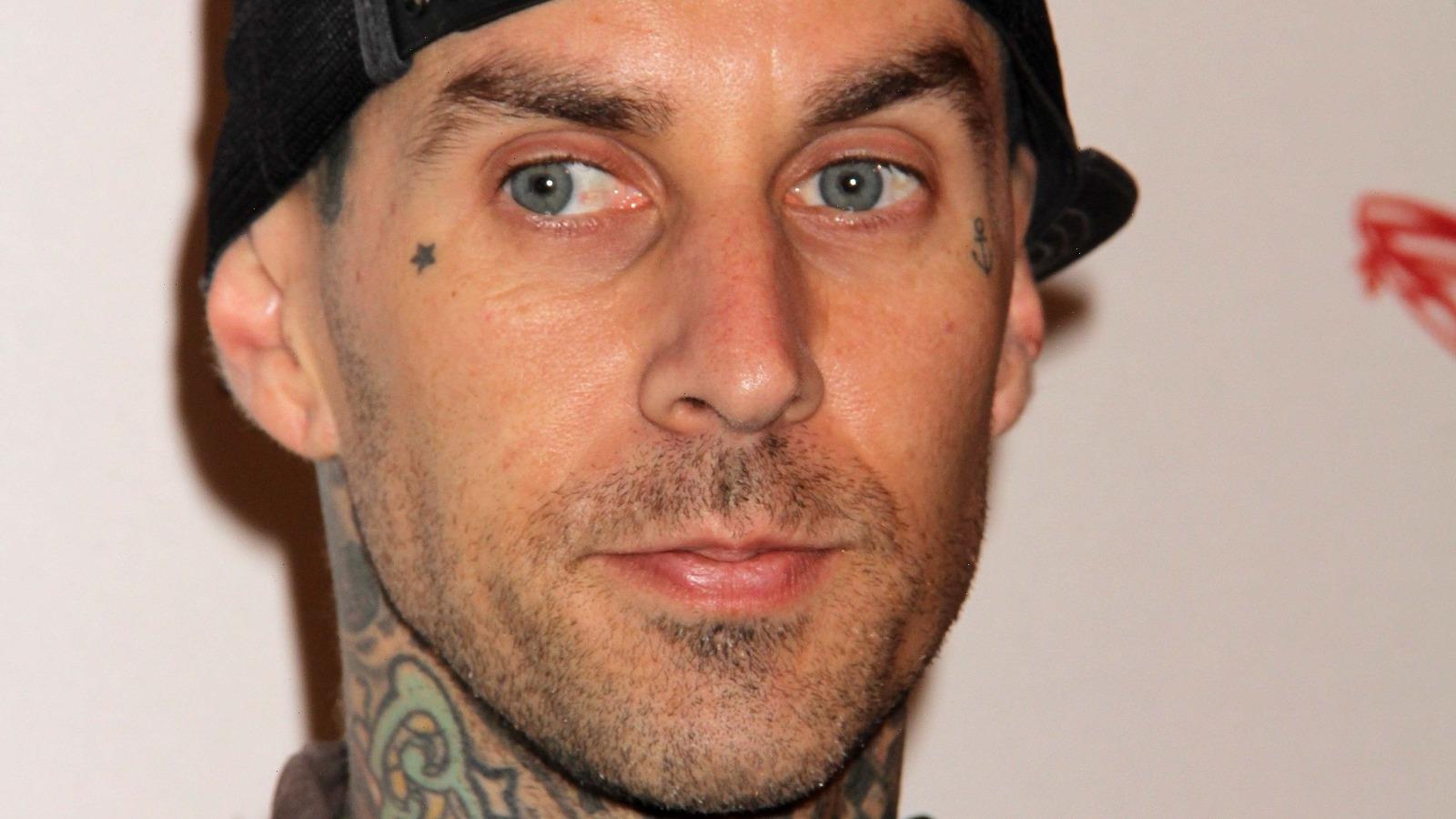 When it comes to celebrity body art, few people have quite as much ink as Travis Barker. The Blink-182 drummer is truly tatted from head to toe, except for portions of his legs that sustained third-degree burns and extensive scarring after a September 2008 plane crash (per GQ). Barker lost his very first tattoo when that area of skin was injured. “It got burned off in my plane crash. It doesn’t exist anymore,” he explained to Fuse. “It was my nickname, Bones, written just like the palprota bones. It had a Dag Nasty symbol right above it. That’s a hardcore band I really liked. Still do really like.”

Travis Barker has several names tattooed on him

Travis Barker has quite a few names tattooed on his body, including that of his girlfriend, “Keeping Up with the Kardashians” star Kourtney Kardashian (via People). He has also had the names of both of his ex-wives tattooed on him. The tattoo he got for his first wife, Melissa Kennedy, has been covered up. The one for his second wife, Shanna Moakler, was still etched in his skin as of 2015. “I don’t know if I’m going to cover it up, but I’ve thought about it,” he told Vice that year.

There’s also his “pal” tattoo, a matching piece he got with his dad that shares their nickname for each other. “It was funny, ‘cos growing up he said ‘If you ever get a tattoo, I’m gonna kick your ass and kick you out of the house,'” he told Vice. “But many years later — 20 years — Pops had some tattoos of his own. It’s awesome. My mum passed away when I was 12, so my relationship with him is so important.”

Barker also has his mom’s name, Gloria, on the base of his neck. Of course, he has the names of his two children on his wrists, with Alabama on the left and Landon on the right (per Body Art Guru). He even has his own initials, TLB, on his right forearm.

Travis Barker had a host of tattoos on his legs and back that were lost following the plane crash he survived in 2008. “Well all the tattoos were burnt off from my legs and all the skin from my back had to be peeled off and used as grafts on other parts of my body,” Barker told Vice.

He later covered that area in a massive tribute to his family that takes up his whole back. It features portraits of his parents and children. Barker explained that he was inspired to get tattoos to cover his burn scars after a fan took a picture and pointed out the burns. “It kind of bugged me,”  he recalled.

Barker added, “It’s not like I’m ashamed of any of the burns: they are one big tattoo for me. They’re part of the story of my life, but a big back piece is really dope. I think it’s weird when people have tattoos on their head and their face, but they don’t have their back done.”

Travis Barker has a lot of head tattoos

It’s hard to believe how many tattoos can fit on one person’s head, but Travis Barker has crammed them in. He’s got some more family-oriented tattoos, with a heart that reads “mom” on the base of his skull (per Body Art Guru). There’s also “Barker,” his last name, and “family first.” He honors another kind of family with the Transplants (his former band) logo on the back of his head.

He also honors his religion with a cross on his head that has his son’s name, Landon, going down it and “Bama” for his daughter, Alabama, going across. That isn’t the only way Barker’s tattoos honor his Catholic upbringing. Barker also has prayer hands on the left side of his head. Under his left eye, he has a tattoo that reads “blessed.” On the underside of his chin, over his mom’s name, it reads “in God’s hands.” On the top of his head is a full Virgin Mary tattoo, which he got in 2012. It’s his second tattoo of the religious icon, who he first got tattooed on his forearm when he was 19 (per Vice).

Both of Travis' kids have tattooed him

Travis Barker’s kids also love ink. Barker has given them both a spot on his leg where they’re able to tattoo him whenever he’s getting work done. “I have this portion on my thigh where basically anytime I get tattooed, if they’re around and they want to, they can grab the gun and doodle on me. It’s like a sketchbook. Those are the memories that are really priceless,” he told GQ.

The story behind the decision to give them a space on his canvas is just as sweet. “It all started because Landon wanted a tattoo,” he explained. “He didn’t understand why he couldn’t. He was worked up and in tears. I had to explain that I’d go to jail if you get a tattoo. So I said ‘Let’s make a deal, you tattoo me.'”

His kids, now teens, are interested in ink too. Son Landon has been itching for some face tattoos. “My son’s 14 and he asks me every day,” Barker told TMZ. “Yeah, but there’s an obsession with kids and face tattoos now.” He added, “Yeah, he would love it, but I tell him, ‘Until you’ve walked in my shoes and you’re ready to hustle like dad did, you can’t get face tattoos.'”

While Travis Barker’s tattoos don’t follow a particular theme, you can get a feel for what kind of guy he is from them. There are a lot of nods to classic Americana, from the “Cadillac” script down his side and various other car-related tattoos to the Marilyn Monroe ink over his throat (per Ranker).

The other theme that stands out is music, an obvious nod to the career Barker’s maintained passion for over decades. He’s arguably one of the best drummers of his generation and an authority on modern punk (per Drumhead Authority). There are tributes to his own influences, such as his “Can I Say?” Dag Nasty tattoo or the Misfits ghost on his left thumb (per Body Art Guru). Then, there is the “LASALLE” tattoo on his torso, a tribute to his LaSalle Records label launched in 2004. There are also more general music tattoos, like the microphone on his left forearm, the drum on his right arm, or the music note over his left ear.

One of the tattoos Barker is best known for the iconic boombox on his upper stomach which he got as a tribute to his love of break-dancing. Barker told GQ that he frequently sees fans copy this tattoo in his honor.