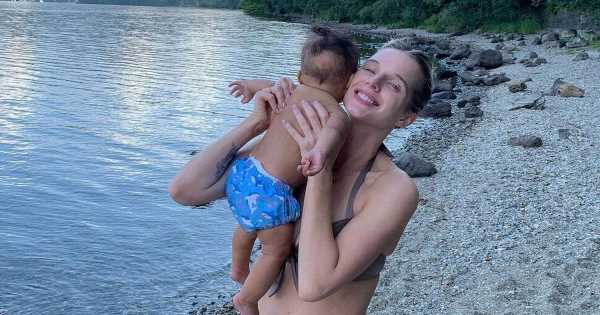 Helen Flanagan showcased her post-partum body by wearing a brown bikini whilst on a UK getaway with her mum Julia.

She headed off to Loch Lomond in Scotland with her family, including baby son Charlie who she gave birth to back in March.

The former Coronation Street actress, 31, took to Instagram to post some snaps of her time away as she cradled Charlie in her arms.

She looked like she was enjoying her break as she smiled whilst on the Scottish beach with the stunning backdrop.

Despite only giving birth in March of this year, she revealed her trim figure whilst donning a brown two-piece with her hair swept back into a bun.

Her trip comes after Helen took to her Instagram page to express that she was feeling anxious and overwhelmed as a result of recently moving house in secret.

She confided in her followers to tell them that she couldn't cope with unpacking all of her belongings which are still stacked up in all of the rooms.

Helen also mentioned that she had been feeling rough all weekend with a sickness bug which left her weak and unable to look after her children properly.

The star also revealed that during all three of her pregnancies she had a hard time suffering with Hyperemesis gravidarum, which is excessive nausea and vomiting which often needs hospital treatment.

Opening up, Helen spoke on her Instagram stories and said: "I'm trying to get on top of the house. I've actually moved house recently which is exciting but it has been stressful.

"I haven't shared it on my social media. I don't know. It might sound really silly to a lot of people but sometimes sharing some things on Instagram makes me feel a bit anxious.

"Anyway we've been moving house the last few weeks really and I'm not going to lie. I do feel a bit overwhelmed. Every single room is like towers of boxes and I can't find anything and organisation is not my strong point."

She also mentioned the sickness bug which had left her feeling drained for a whole weekend.

She said: "Scott's been away all weekend with football and my mum's been away. Looking after three young children with the bug has been hard.

"Girls have argued the whole time and Charlie has wanted to be held all the time. Not being a misery but showing a bit of reality."