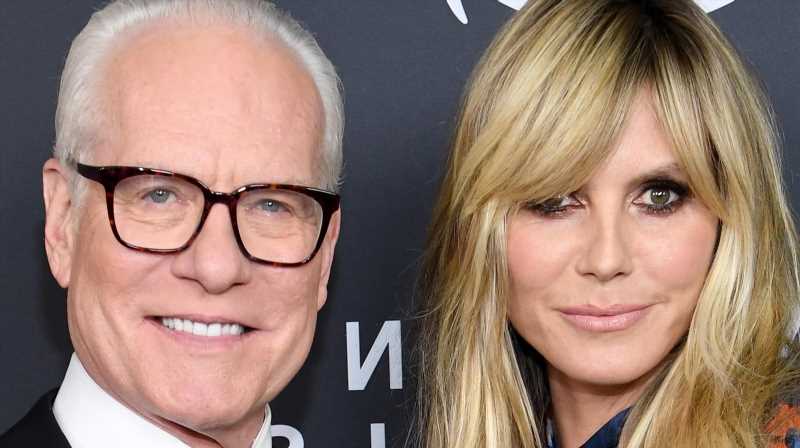 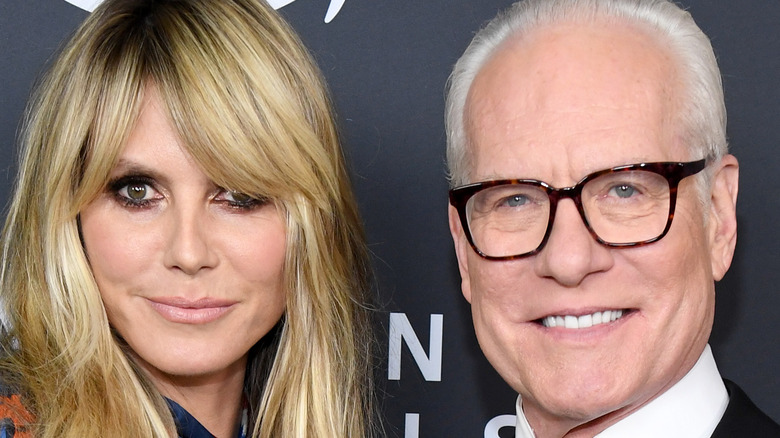 When fashion and television intertwine, you get a show called “Making the Cut.” The successful series made flaunting high fashion even more accessible than ever, as viewers from all around the globe tuned in to see the looks that were available for purchase on Amazon throughout Season 1. Soon the series will soon be back on our screens for a second season. While all of us will have our own opinions as we watch what everyone is wearing, these designers’ fates are basically in the hands of two of the biggest names in the business — Tim Gunn and Heidi Klum.

As the competitive series continues, this season features episodes unlike any we’ve seen before. Since we first saw this duo on-screen for “Making the Cut,” a pandemic has hit, so the designers were forced to dream big in a small space in Malibu, California.

While prepping for the premiere, we got the chance to sit down with Gunn and Klum to ask them all about what we can expect to see. In an exclusive interview, these fashion icons and “Project Runway” alums told us all about the behind-the-scenes moments we missed, how hard it is to judge “Making the Cut,” and how they had to make it work during a worldwide pandemic. 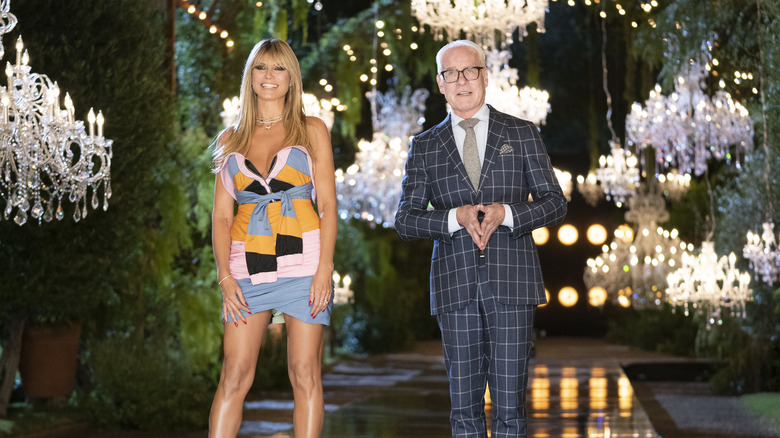 “Making the Cut” isn’t the first show that you’ve starred on together. What’s the best part about working with each other?

Tim: Well, I’m going to jump in. On the other show [“Project Runway”], Heidi and I barely interacted. We had such separate and discrete roles. On “Making the Cut,” we interact all the time, so I couldn’t be happier and more in love.

Heidi: It is great to be able to work with someone that knows you very well. Sometimes, I don’t know, we would come to set. Maybe I’m a little tired. I can’t remember anything, my lines that I have to say. When we give the assignment, it’s like — then it’s a little scripted, because the assignment has to be very precise on what they have to do, or how much time they have, when they have to stop this, that, and the other. So we have to communicate that to them perfectly.

So he’ll know when I’m like, “I can’t get it out today.” Then Tim is like, “I’ll do it.” Or sometimes that happens the other way around.

Heidi: Where it’s like, “I have a brain fart today. It just doesn’t want to come out.” It’s just beautiful when, you know, we have each other’s backs. We can have fun. We can laugh at each other, with each other. It’s beautiful when you get to go to work, and it doesn’t feel like work.

Heidi: Because sometimes, I don’t know how people do it when they have to go to a workplace, and they don’t like the people who they’re with. I think that’s why it’s so fun. We’re having fun together. We get to see beautiful art come down the runway. We have 10 people who are bright-eyed, sparkly. They’re so excited to be there. It’s just beautiful because we get to showcase 10 amazing artists, and we get to shine a light on them, and now they get to be seen around the world. So it all in all feels good.

Have there been any behind-the-scenes moments we've missed on Making the Cut? 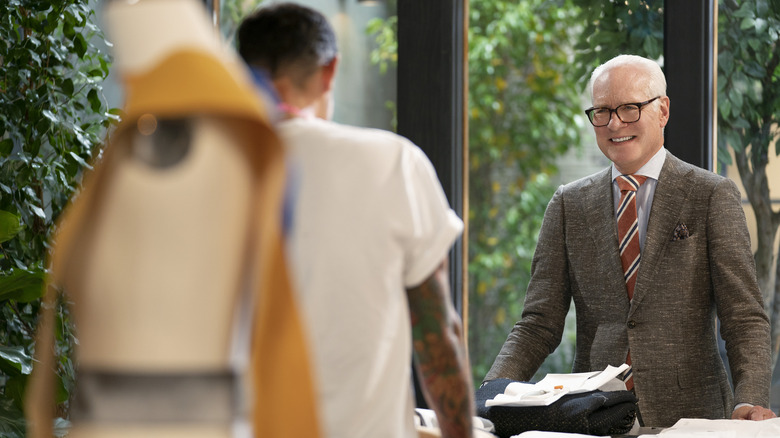 What’s something you wish viewers could see that was cut out, maybe for timing, or isn’t included in any episodes?

Heidi: I mean, we — we do a very long deliberation. If you guys would see that, you probably would be bored. I feel like we cut together all the highlights and the fun things, because sometimes when we’re, like, fighting or deliberating, or we’re looking at previous things that I’ve done, and then we start discussing about what of this? Nah, nah, nah. So sometimes, it just drags out really long. So those are, like, the behind-the-scenes things maybe that happened that, you know, maybe are not interesting to watch. So, you know, we kind of really want to condense it to, you know, what is the most exciting parts we feel like?

Tim: Yeah, I have to say, Kelsie, that the editing is brilliant. And speaking for myself, I couldn’t do it. If it were my task, it would probably be a 24-hour show, and people would turn it off after 10 minutes. 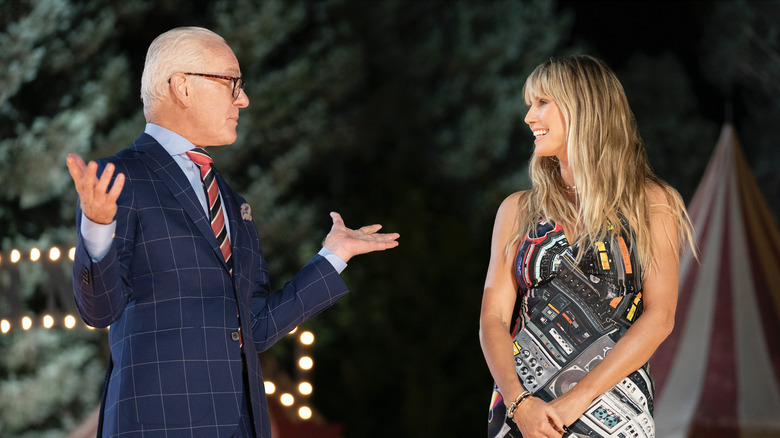 Tim, would you ever want to be on the judging side?

Tim: I love my role, and I have such enormous respect for Heidi and her fellow judges. I wouldn’t want to do it for anything. No. I love, love the position that I have.

Heidi: It’s hard sometimes when you do it, because it’s hard to crush someone. It’s hard to have to, you know, look at someone’s eyes and say, “You’re not making the cut.” And then you see either the tears or how they’re crushed. It’s, like, not nice sometimes, having to be the messenger, you know? And it’s not just only my opinion why you’re not going. I mean, we all discuss it, but they always look at me like they want to, like — the daggers they’re shooting at me, you know? Because I want everyone to walk away feeling good, but some people have to go along the way. Otherwise, we won’t have a winner. So, we’re always trying to find the weakest link, and unfortunately, they have to go. It doesn’t mean that they’re not good. It’s just in this assignment, they were the weakest, and, therefore, they had to go. So, to tell them that, it’s never so nice.

Tim: Kelsie, I have to say, also, I learned so much from Heidi and Winnie [Harlow] and Jeremy [Scott], and it helps inform me about what I say to the designers in the design studio. It helps enormously, because I can then anticipate what will potentially happen on that runway.

What it's like shooting a show during a worldwide pandemic 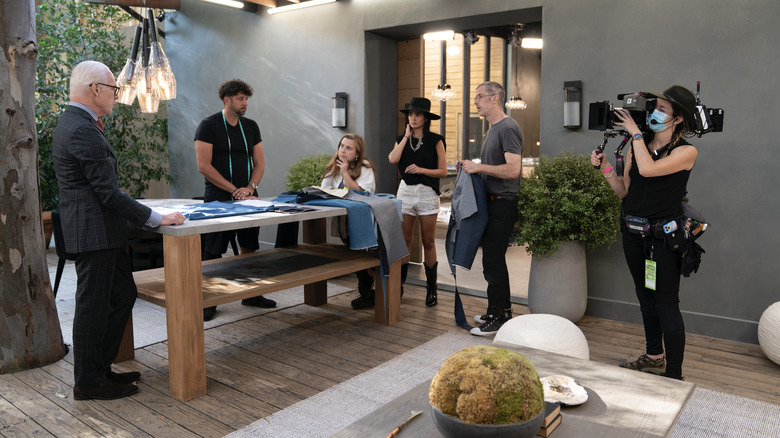 I want to talk about your experience on set. How was shooting Season 2 different from Season 1? Because, obviously, we were in a pandemic.

Tim: Well, that’s true. I was the only person who was brought in outside of Los Angeles, so I came in from New York and everyone else was local. It was a challenge, but it’s a fabulous season. It really works beautifully, but we were very — I’ll say, we were almost paranoid. We were so careful. We were extremely responsible and diligent. There were 100 people on set. No one got sick, so we were doing something right.

Heidi: Yeah. I mean, when you travel, and you go to beautiful places around the world, you have that backdrop already. So you don’t need to do so much in the art department, let’s say, but because … there’s green and green and more green, being in Malibu at this ranch. So our art department had to really step in and really bring the magic here, because we didn’t have the backdrop of Tokyo or the streets of Paris.

So when you’re in this bubble, we had to just create more beauty or more magic that you are diving into this world. And that’s what fashion is all about. You want to dream, and you want to look at this, and that inspires you to dream yourself by wearing the clothes and morphing into different personalities, perhaps.

Tim: Have you seen this season, Kelsie?

I have, and they’re amazing — all of the sets for each show!

Heidi: And it was fun for the designers, because sometimes, in the morning, we would give an assignment, and then while they were working, the art department was doing all these magic hours. And then they came back, and they’re like, “Is this the same spot we were this morning? Wow. What happened?” I mean, everyone put in extra work, because, also, we didn’t want to let our fans down.

Heidi: It just shows you that when you have creative people, you can still put something beautiful together. I always say, we could have done this in a square black box, and we could have made this fantastic. And that would have been our challenge, to really bring the magic, just in that little space. Because we didn’t want to let anyone down, and especially, not the designers. They were waiting for their moment. This is their moment. This is their opportunity, and in life, you don’t always get so many. So, we wanted to make it also extra special for them, so they didn’t feel like they got the short end of the stick. 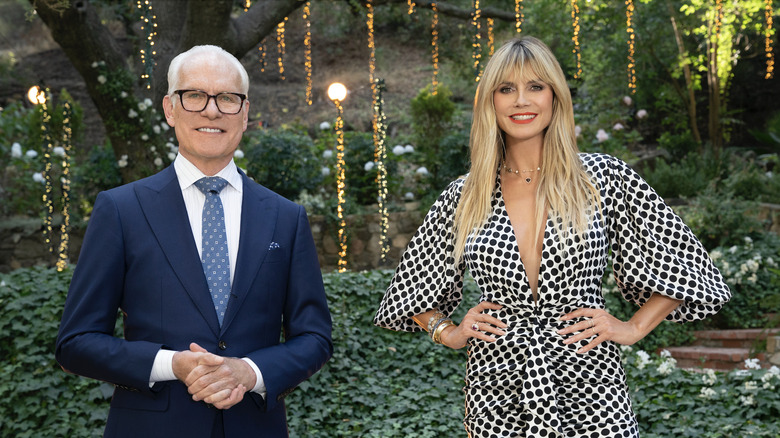 You were on “Project Runway” together. Now, you’re on “Making the Cut.” What’s a favorite memory that you have from working on the shows — one that stands out?

Heidi: Sometimes I feel like our nervousness being backstage, coming out in front of a large audience. I don’t know. I mean, those are amazing. You mean, with Tim and I? Yeah. Right?

Heidi: Those are moments that I will always carry in my heart and in my memory bank forever, us doing this. We started this together. We started showing how fashion is made on television. You had not seen this before. So, we were always proud of this, but we were also nervous. I had not really been on TV. Tim was not really so much on TV. So we were in the beginning, winging all of this. I didn’t learn to host anything or do these types of things and speak in public like that. And so, I had so many sweaty palm moments with Tim behind the [scenes] and like, “Oh, my gosh,” or even shaking, or dry mouth, or I don’t know. And this kind of bonds you in a different way.

When people see you on TV, and they just see all the highlights, and it’s all like, “Yay! Hi, guys! Here we are!” But really, behind the scenes, there’s a lot of nerves and worries, and, “Are we doing the right thing?” And, “How can we make it better?” It’s just like a long journey that we have together. And it’s something that no one will ever take away from us, because we had so many things that happened.

Designers are leaving in the middle of the night. We’re like, “What are we going to do now?” Or, I mean — you know, we had crazy judges that locked themselves in the bathroom and don’t want to come out. I mean, we’ve had so many. I mean, there’s just so many crazy moments that they just keep popping in my head, where we had to make it work. Every time when something is weird or strange or special, you know, we “made it work,” as Tim would say.

Heidi: And I say that a lot of the times to myself. Even when Tim is not there, I’m like, “What would Tim say? ‘Make it work.'” Because if you’re not, someone else is going to make it work.

Tim: I have to underscore what Heidi is saying about those moments that we have together, just the two of us, because when we share each other’s vulnerabilities with the other, it develops a bond that is lifetime. You can’t possibly, possibly erase. And it’s a very touching and moving moment.

Heidi: You know, what our abilities are, and what our fears are. And so, yeah.