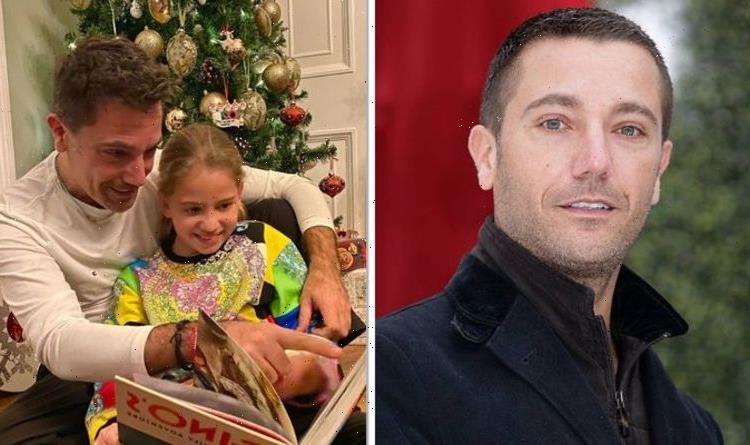 Gino D’Acampo, 45, has taken to Instagram to share news of an adorable addition to his family. The celebrity chef posted a short clip out to his fans showing off the emotional moment he brought in the new member of the family.

Gino posted the video to his 1.4 million followers.

The clip showed the star bringing home a tiny spotted dachshund to surprise his daughter, Mia, 8.

The caption introduced the dog to his followers.

Mia was sitting in front of her dad and the new puppy, blindfolded, as Gino told her not to peek.

He said to Mia: “Do you remember that I said to you that I had a late Christmas present?”

She replied saying she did, to which Gino followed up by apologising for the blindfold, quipping “it was the only one I could find in your mum’s bedroom.”

He then told her to remove the blindfold at which point Mia began to burst into excitement as she launched herself towards her new pet.

She yelled repeatedly, in disbelief: “No you didn’t!” as Gino watched, smiling.

He then asked her what she thought, telling her that the dog’s name was “Snoop.”

Mia then said she loved the dog and gave her dad a kiss.

Fans shared Mia’s excitement, rushing to the comment section to express it.

Kat3hudson said: “We love Gino. What a dad.”

Lorettejane34 wrote: “You guys are the cutest. Hello Snoop Dog.”

Gino is currently married to wife Jessica Stellina Morrison, with whom he shares three children.

In December, the couple renewed their marriage vows in a public romantic gesture.

The This Morning regular had taken his wife on a romantic holiday to Puglia in Italy.

The two decided not to bring along Mia and their two sons, Luciano, 19 and Rocco, 16.

The ceremony was held to mark the couple’s 20th anniversary.