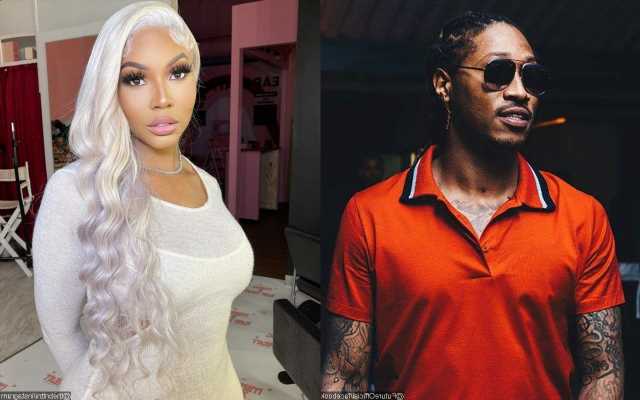 The ‘Turn On the Lights’ hitmaker shows off several stacks of cash for the camera, which he claims amounting to a quarter of a million dollars, after his BM Brittni Mealy sues for an increase in child support.

AceShowbiz –Future seemingly has no qualm about a lawsuit filed by one of his baby mamas over child support payments. The Atlanta-born rapper has flexed his wealth amid looming court battle over the amount he pays a month for their now-nine-year-old son Prince.

In a video shared by Chicago rapper and Freebandz artist Zona Man on Sunday, November 13, Future showed off several stacks of cash for the camera. According to the “Move That Dope” emcee, the racks amounted to a quarter of a million dollars.

“50s,” Future said in the clip, which he reposted on his Instagram Story, while referring to a single stack he held in one hand. He went on counting the rest of the stacks in his other hand, “That’s a hundo right there. 150 right there. That’s a quarter M just right here.”

The video arrives after his ex-girlfriend Brittni Mealy filed a petition, demanding an increase in child support. According to Radar Online, in the documents, she explained that Future was ordered to pay $3,000 a month in child support back in 2014.

However, she argued that since the order, there has been a “substantial change” in Future’s income and change in the needs of their son. She added that Future did not “exercise his scheduled parenting time” and therefore “bears the burden of additional expenses for” their son.

Brittni accused Future of failing to maintain dental insurance and said he was in willful contempt. She claimed that she had to spend money on daycare costs because he often doesn’t show up. She additionally wanted Future to maintain a life insurance policy in the amount of $350k naming their son as the beneficiary.

Future has shown up in court to respond to the lawsuit. He demanded her request to be shut down in court and that the payments remain the same. He argued he had “consistently and timely paid his child support obligation” and that the original settlement addressed his traveling.

The 38-year-old admitted he did not obtain dental insurance, but said that he was handling the situation. Thus, he demanded the suit to be tossed. The case is still ongoing.