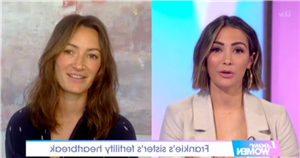 Frankie Bridge has admitted that she felt guilty for "rubbing her sister's face in her kids" while she was going through a series of miscarriages.

The singer and her sister Tor Cook were on Thursday's Loose Women, where Tor, who lives in Bermuda, spoke about having had four miscarriages and going through IVF during the coronavirus pandemic.

Although Tor now has twin boys, Frankie said that she had been overcome by guilt during her sister's struggle to have a baby.

Frankie, who has two sons Carter and Parker, said: "It was difficult for both of us, we've always been really close and Tor knew that I always was going to settle down and have babies at quite a young age.

"It wasn't really until she was ready to have kids and then going through her struggles that it was really hard.

"I didn't always know what the right thing was to say and I would often feel guilty being around her with my boys because there was one point, Tor, where we came over to Bermuda to see you and you were pregnant at the time and you miscarried the baby while we were there."

Frankie admitted: "As much as you said that it was nice we were there as a distraction, I couldn't help but feel guilty that we were there almost rubbing Tor's face in my kids."

But Tor reassured her, saying: "I didn't feel like that at all. It was nice to take my mind off it and have family around me."

The Saturdays star and her sister also spoke about her having gone through pregnancy and welcoming her newborn twins during the pandemic after having successful IVF.

Frankie said: "As a family and Tor's friends we were all going through it with her and then she had these gorgeous little bubbas and we couldn't go and see them."

Tor added: "I'm really sad that no one got to see my bump grow and I didn't get to dress it in cute outfits because it's probably the only time I'm going to have one."

Also during the show, Frankie discussed having husband Wayne's parents living with them and said: "Obviously we all get on each other's nerves sometimes."

She added: "Lockdown we all found a bit harder because normally there would be times we would be away without them…but the good outweighs the bad."