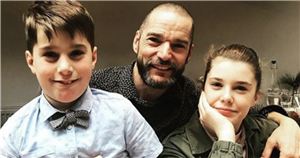 "Fourth best diver in the world! Best daughter and best sister ever! Well done. We are all so very and unconditionally proud of you #goAndrea," the Channel 4 star wrote alongside a throwback image of him with his daughter.

Andrea qualified for the upcoming Tokyo Olympics following her impressive display at the preliminaries.

Sharing a clip of Andrea diving, Fred wrote on Instagram: "So proud, happy and excited for Andrea.

"She just won her place in the @fina1908 #worldcup #diving #10m #platform semi-final and qualified for @olympics #goAndrea @teamgb @britishswimming."

London native Andrea is a member of the Crystal Palace Diving Club in south London and has competed worldwide, including Kazan in Russia.

Competing in the Women's 10 Platform at the age of 15, Andrea won gold at the British Championships in January and February last year and the FINA Grand Prix in Rostock, Germany.

Given her impressive achievements, Andrea was crowned BBC's Young Sports Personality of the Year in December last year.

Andrea was the first female diver to win the BBC award, and dad Fred "cried" following the announcement.

Fred shares Andrea and 11-year-old Lucien with his ex-girlfriend Alex.

He has been engaged to his new love, who he affectionately calls "Fruitcake" since March last year.

Opening about his private life, the TV star told Fabulous: "Occasionally, I'll go for a little wine and some tapas after work with my partner, who I like to call "fruitcake".

"It's nice to have a relaxing conversation and chill out when you've had a long day. If I do get the chance to be in the kitchen, I love making fresh pasta. I find rolling it out very therapeutic, and I get flour everywhere; it's great fun.

"In the evenings I like nothing more than sitting down with a beer and watching something on Netflix."