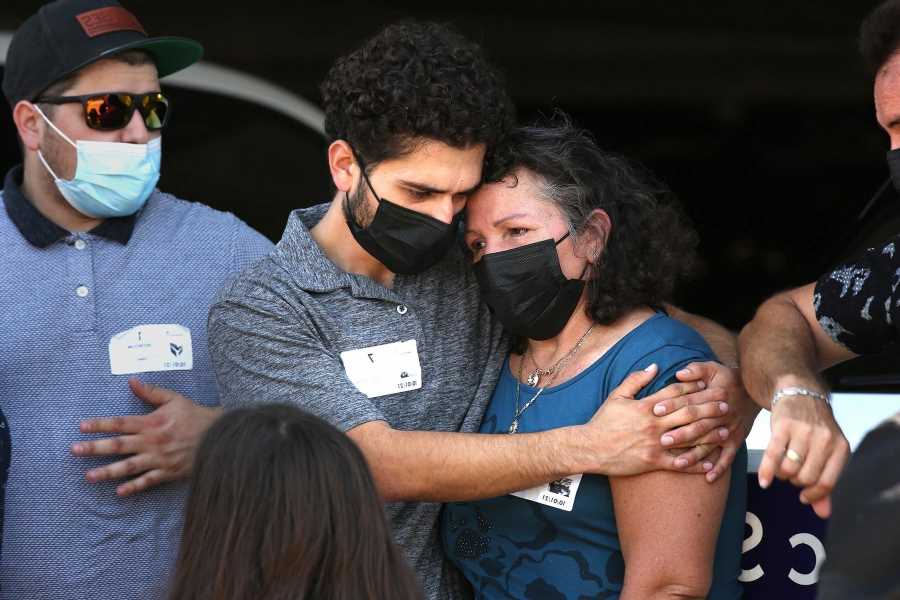 The family of Mona Rodriguez is demanding criminal charges be levied against a school safety officer who fired into a moving car outside a high school in Long Beach, California, shooting the 18-year-old and leaving her brain dead. On Tuesday morning, the family held a press conference in front of LA County District Attorney George Gascón’s office at the Hall of Justice.

One of the victim’s brothers, Omar Rodriguez, told reporters, “My sister’s rights were violated. Her life was taken. You tell me that was just? I say no. I say my sister was murdered.” Another brother, Oscar Rodriguez, led a crowd of supporters in a bilingual chant demanding accountability for his sister: “¿Qué Queremos? ¡Justicia! What do we want? Justice!”

Too Bad, Anti-Vaxxers: California Will Mandate Covid Vaccines for Students

Britney Spears' Conservatorship: What's Going on and What's Next?

100 Best Sitcoms of All Time

Manuela “Mona” Rodriguez was mortally wounded on Monday, September 27th, in a parking lot near Millikan High School — a 3,500-student campus not far from the city’s airport. A school safety officer, identified by the Long Beach school district as Eddie F. Gonzalez, was on traffic duty near the school. Shortly after 3 p.m. Gonzalez saw a scuffle on the street between Rodriguez and an unidentified 15-year-old girl, according to an account provided by the Long Beach Police Department.

After the fight broke up, Rodriguez, who was not a student at the school, jumped in the front passenger seat of a gray car driven by her boyfriend. Cellphone video captures the violence that ensued: As the safety officer approached, the car peeled out to leave the scene. Making a sharp right turn, the car came close to his body. The safety officer stepped back, drew his gun, and fired, twice, at the moving vehicle. After the gunshots, the audio captures screams from other passengers in the car.

Long Beach police described Rodriguez as being struck in her “upper body.” Rodriguez’ family says she was shot in the head. Gonzalez, the school safety officer, has been placed on administrative leave, pending investigations by both the Long Beach Police Department and the District Attorney’s office.

In an interview with Rolling Stone, Luis Castillo, a lawyer representing the family, says that “the shooting was totally unjustified. This was beyond atrocious. This was a crime.” Castillo adds of the school officer: “He fucked up royally, totally. And he destroyed not only her brain, he destroyed an entire family.” Rodriguez, the mother of a six-month-old baby, has been kept on life support for the past several days to enable the donation of her organs, but that support will soon be withdrawn.

“When she’s gone — it will be this week sometime,” Carrillo says, speaking of Rodriguez, “this cop should be prosecuted for second degree murder or involuntary manslaughter and assault with a deadly weapon.” The lawyer adds of Gonzalez: “He had no imminent threat from Mona or from the car. But worse, Mona was the passenger. She was not even driving. She had no gun. Nobody in the car had any guns.” Carrillo insists the shooting was the result of a “major failure to follow proper police procedures.” Separately, Carrillo has written a letter to California’s attorney general, calling on state authorities to pursue criminal accountability for the “unjustified use of deadly force.”

According to a recent job posting, Long Beach Unified School District hires school safety officers to “model and promote a positive, productive and safe campus climate,” adding that officers are expected to “intervene in conflicts… and de-escalate situations.” Responding to questions from Rolling Stone, Chris Eftychiou, public information director for the district, says that school safety officers “don’t investigate crimes or arrest people. Police do that.” But he adds that safety officers “can detain a person pending investigation by law enforcement.”

At all times, Eftychiou insists, safety officers are bound by the district’s use-of-force policy (embedded below). This policy raises serious questions about Gonzalez’s decision to open fire. It cautions that officers are to only use firearms in “self defense” or “defense of others to prevent death or great bodily injury.” (School safety officers are “trained to respond to potential active shooter incidents,” says the information director.)

The document also offers a striking list of cases where guns should not be used:

Firearms SHALL NOT be discharged under the following circumstances:

The shooting has been roundly criticized by law enforcement experts. Efforts to reach Gonzalez were unsuccessful. The district would not provide contact information or identifying details, such as age. A message left seeking comment from the California School Employees Association union, which often represents school officers, was not returned.

The presence of armed personnel at public schools has long been controversial. In fact, the Long Beach Unified School District has literally been a case study in the hazards of over-reliance on law-enforcement to address school safety and culture. A 2016 report by Children’s Defense Fund-California and Public Counsel chided the district for having spent “200 times more on law enforcement… than on its prevention-focused school climate strategies,” while underscoring that “Black and Latino students are disproportionately impacted by police involvement at school.” The district’s communications on the Rodriguez shooting even sounded like PR from a police department. In a letter to parents, Superintendent Jill Baker described how “an LBUSD school safety officer discharged his duty weapon,” and in a press release to the media, the district relied on the cop euphemism “officer involved shooting.”

For the Rodriguez family, the focus is on individual accountability. At an earlier press conference, Oscar Rodriguez demanded justice for his sister. “She didn’t deserve this. No one deserves this,” he said, adding of the shooter: “All I want is for him to see what justice feels like.”