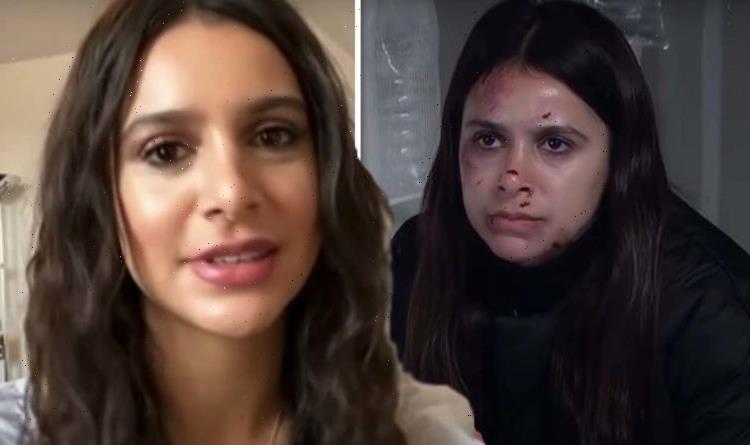 Paige Sandhu, 24, plays Emmerdale’s evil serial killer Meena Jutla. Despite only joining the soap just over a year ago, Paige has been at the centre of some of Emmerdale’s most explosive storylines ever. The evil nurse has killed several village favourites, and it seems her murder spree is not over yet.

With an incredible year concluding with a deadly explosion in the Woolpack, Paige has revealed the attention she receives for playing such a hated character can take its toll.

In an interview with the Sunday Mirror’s Notebook magazine, Paige admitted Emmerdale fans make her nervous.

She said: “I must admit, when I see fans waiting outside the studio, I do get a bit nervous.

“It’s a completely new experience because I’ve been working through Covid and not really had to deal with that kind of thing.

“However, I’d rather embrace it than shy away.”

The actress has previously opened up about her battle with anxiety which was heightened before she landed her role in Emmerdale.

She previously told the publication: “When I left drama school, I was a very anxious person. I wasn’t getting any jobs and I was struggling.

“The anxiety took the form of insomnia. Life was hard and a struggle.”

Now, Paige says she has found ways to cope when she is going through a hard time.

She said: “I felt a little bit anxious recently over nothing I could put my finger on, so I did some yoga and meditation and it made me feel like a different person.

“As long as you take care of yourself, anxiety won’t feel as overwhelming. That’s what my experience has taught me.

“When I look back on when it was really bad, I feel grateful for that time, because I learnt how looking after my diet, my sleep and my mental health all adds up.”

Paige added she can always go to Rebecca Sarker, who plays her on-screen sister Manpreet Sharma, for support if she ever feels on edge.

Paige continued: “We’re constantly messaging and sending each other voice notes on WhatsApp. If I ever feel anxious or need to vent about something, I go to Rebecca for support.”

Rebecca echoed: “We speak lots outside of work. We’ve both been so busy, it’s hard to socialise in any normal kind of way, but if I were to socialise with anyone, it would be her!”

It comes after an explosive Christmas in the Dales which saw Al Chapman (played by Michael Wildman) send the Woolpack pub up in flames after he didn’t get the deeds to the land.

Both Meena and her sister Manpreet were near the pub for the horrifying blast.

Both sisters survived, but Manpreet has been left in a coma and Meena seemed to confirm her sister is next on her hit-list.

In terrifying scenes, Meena issued a chilling threat when she was alone with her sister in her hospital bed.