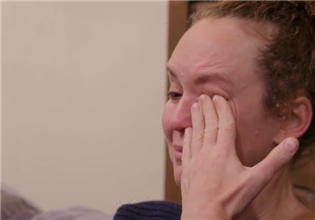 From the start of this season of 90 Day Fiance: The Other Way, we’ve known that a hurricane was coming to Providencia.

To Ellie Rose and Victor McLean, it was just a tropical storm … until it was abruptly a Category 5.

Overnight, Victor was suddenly no longer able to respond to Ellie, who was left monitoring news of the devastation.

After tragically losing her husband years earlier, the thought of history repeating itself was too much to bear.

In this sneak peek clip for Season 3, Episode 3 of 90 Day Fiance: The Other Way, Ellie Rose is going through it.

“Overnight,” she says, what began as a tropical storm morphed into Hurricane Iota, a Category 5 monster.

As miserable as she is while unable to contact Victor McLean, she cannot help but fear that things are so much worse for him.

With teary eyes, Ellie scrolls through the last text messages that she received from Victor.

He had asked her to pray for him and for others within the destructive radius of the storm.

Since those messages, all lines of communication out of Providencia had gone silent.

“He said he was so scared,” Ellie explains to a producer, “and to pray for them.”

“And,” she continued, “it was, like, worse than they thought.”

With no ability to get in touch with him or anyone else on the island, Ellie could only imagine what had happened.

“I just don’t know if, like, the roof was ripped off of the house,” Ellie admitted.

She continued: “Like, I don’t know how you would survive it, honestly.”

“It feels like death, just knowing the destruction that’s happened there,” she added.

Ellie’s bestie, Hiromi, stops by later in the clip to visit and offer comfort.

But of course she doesn’t want him to be killed in a catastrophe, especially considering what Ellie has been through already.

As Ellie explains to Hiromi, she hopes that Victor and his family made it to a community center.

Victor’s home is located right on the water — making it a death trap during a hurricane.

What he needs, she knows, is a concrete structure that can hold out against the storm, not a wooden house.

One thing that Ellie knows for sure is that there’s “no way” that he made it off of the island before this went down.

It doesn’t sound like they had much in the way of warning.

And being caught on a boat at sea during a hurricane … well, that can be even worse than being on land.

Ellie and Victor have actually both been pretty good about not spoiling things for their season.

However, we’re pretty sure that they’re one of the 90 Day Fiance: The Other Way couples who are still together.

So, obviously, it looks like Victor made it through this in one piece. But … the trailer for the show gave that away.