Donald Trump has been mocked online after he stepped out at his first press conference since Joe Biden won the 2020 presidential election, looking a little different than usual. The President’s usually bright blonde hair was appeared much more grey when he spoke about the coronavirus vaccine at the November 13 press event. Naturally, Twitter users couldn’t help but comment on his changed appearance when he appeared in the White House Rose Garden to update the country on the status of the vaccine. “The person who dyes Donald Trump’s hair yellow must have found another job,” one user joked, while another wrote, “White hair–are you trying to look like @JoeBiden, a real president?”

One Twitter user suggested that, “Donald Trump>’s hair dye has conceded,” while another theorized, “Donald Trump has thrown so many tantrums this week that he forgot to use his Just For Men hair dye.” The 74-year-old discussed “Operation Warp Speed” at the press event, and suggested that Pfizer’s vaccine, which was reportedly found to be 90% effective, could soon be available to the wider public sooner rather than later.

It was his first public appearance in days, following Joe Biden and Kamala Harris‘s historic victory just six days prior. During the event, he said that “time will tell” if another administration will take office come January, however he is still yet to concede. Nevertheless, that didn’t stop social media users from celebrating the historic events of November 7. 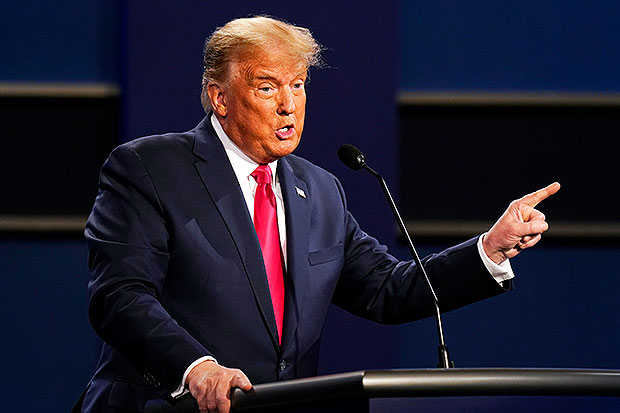 Celebratory tweets poured in from ecstatic and relieved voters who were anticipating the worst after Trump’s unlikely election win in 2016. Hillary Clinton was quick to congratulate Joe and Kamala — and stars like Jennifer Lopez, Jennifer Lawrence, Khloe Kardashian, Ariana Grande, Hailey Baldwin Bieber and Shakira also joined in on the digital celebration. “The voters have spoken, and they have chosen @JoeBiden and @KamalaHarris to be our next president and vice president. It’s a history-making ticket, a repudiation of Trump, and a new page for America. Thank you to everyone who helped make this happen. Onward, together,” Hillary wrote.