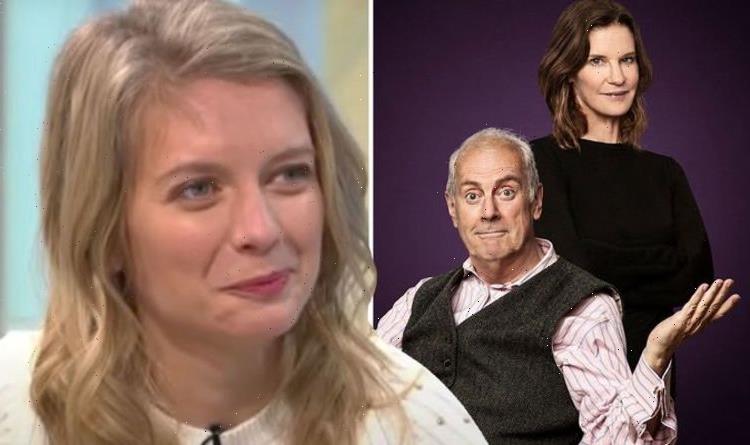 Rachel Riley, 35, has been working alongside Susie Dent, 56, since she replaced Carol Vorderman on Countdown in 2009. In 2019, the maths whizz discussed her husband Pasha Kovalev being a guest on the show and how, she claims, it was Susie who brought out his “naughty” side.

Regular guest Gyles Brandreth said he is yet to see that side of the 56-year-old.

Speaking to Express.co.uk, he said: “If she is, she keeps that for Rachel Riley!”

The 73-year-old said the pair do however find themselves talking dirty – but for professional reasons only.

On their podcast Something Rhymes with Purple, Susie and Gyles sometimes break down the meaning of rude words.

“We have to warn people if we’re going to do one on bad language,” he spilled, pointing out that some of their listeners were as young as 11.

“That’s the only time I’ve known Susie to be rude, deliberately,” the former MP added.

The duo launched their award-winning podcast back in 2019 where they delve into vocabulary and uncover the hidden origins of language.

Gyles said his co-star had to sometimes keep him under control during recording for the show, as he claimed he often goes off topic.

He spilled: “The real challenge with the podcast is it is about words and language, so Susie does have to keep me a little bit under control otherwise I’m telling too many of my name dropping stories instead of asking about the next word.”

During our chat, the presenter was stunned to discover that a widely searched term for the pair is, ‘Are Gyles and Susie married?’

He went on to explain how his co-star and wife Michèle Brown, who he married in 1973, are different.

“I get a bit uptight about language, with spelling and punctuation, I think it’s important.

“Susie is much more relaxed about that.”

Gyles went on to say he thought Anne Robinson was doing a good job as the new host on the show.

She took over from long-serving host Nick Hewer back in June following his 10-year stint.

The broadcaster said he wouldn’t be up for the job himself as it’s too much of a commitment.