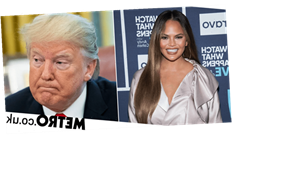 Celebrities are reacting to President Donald Trump being permanently suspended from Twitter – and none more joyfully than Chrissy Teigen.

Like many others, Chrissy has long been critical of the President, so much so that she was blocked by Trump in 2017 after she tweeted: ‘Lolllllll no one likes you.’

So when the Lip Sync Battle star found out that Twitter has permanently revoked Trump’s access to his Twitter account, citing ‘the risk of further incitement of violence’, she reacted exactly how we expected.

Chrissy, who defines her politics as liberal, had criticised Trump long before he entered the White House, but the tweet-happy President soon blocked the model from seeing his tweets.

The feud stepped up further in 2019 when Trump called Chrissy ‘filthy mouthed’ in a bizarre tantrum over not receiving full credit for signing criminal justice reform legislation.

‘In the context of horrific events this week, we made it clear on Wednesday that additional violations of the Twitter Rules would potentially result in this very course of action. Our public interest framework exists to enable the public to hear from elected officials and world leaders directly. It is built on a principle that the people have a right to hold power to account in the open.

‘However, we made it clear going back years that these accounts are not above our rules entirely and cannot use Twitter to incite violence, among other things.’

The safety team also said that plans had ‘begun proliferating on and off-Twitter’ for a ‘proposed secondary attack on the US Capitol and state capitol buildings on January 17, 2021’, and cited Trump’s tweet about not attending Biden’s inauguration as a possible ‘encouragement to those potentially considering violent acts that the Inauguration would be a “safe” target, as he will not be attending’.

Trump, who will be replaced as President on January 20, released a statement saying he had been negotiating with other websites and promised a ‘big announcement soon’.

He added: ‘Twitter is not about FREE SPEECH. They are all about promoting a radical Left platform where some of the most vicious people in the world are allowed to speak freely.’