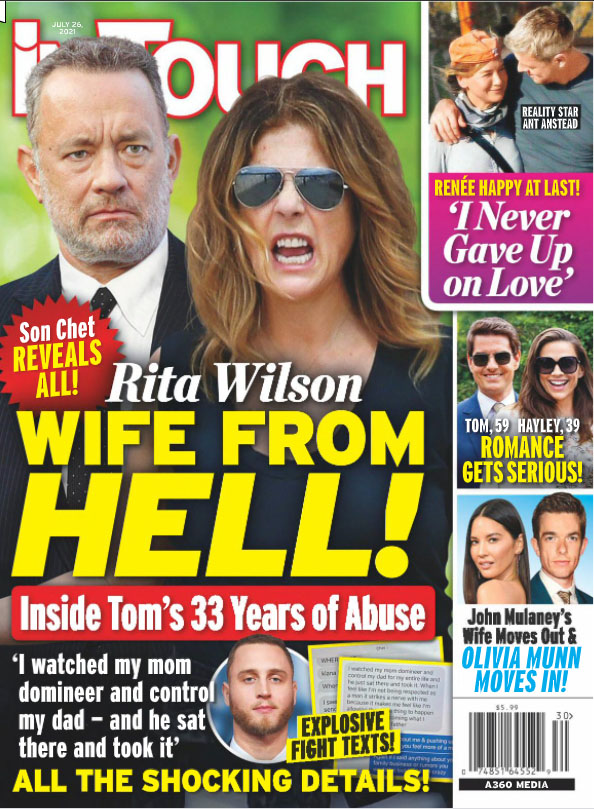 In Touch features Tom Hanks and Rita Wilson on the cover with the title “Rita Wilson: Wife from Hell, Inside Tom’s 33 Years of Abuse.” It’s not just conjecture on In Touch’s part, they have text messages which Rita and Tom’s son, who goes by Chet Haze, sent to his now ex girlfriend. That ex, Kiana, was granted a restraining order against him after he physically abused her when she was leaving him. Chet, 30, claims Kiana went after him with a knife and he is suing her in civil court “for assault and battery, theft and the return of money he said she stole from him.”

The texts which Chet sent Kiana about his mom seem to be his twisted way of justifying his abuse and mistreatment of her. Plus Kiana told In Touch that Chet often complained about his childhood, not recognizing how privileged and rich he was. When Chet’s parents cut him off for drugging and drinking, he had no idea how to get an apartment on his own and Kiana had to help him and sign off on a place for him. He sounds like an awful person who is blaming his childhood for his problems and mischaracterizing his parents’ relationship. I don’t blame InTouch for going with the angle they did, because they need to sell copies. You should buy it to support them and get more of this story, which is more about a narcissistic adult child of famous parents and less about Tom and Rita. Here are a few highlights:

Chet’s text to Kiana: I watched my mom domineer and control my dad for my entire life and he just sat there and took it. When I feel like I’m not being respected as a man it strikes a nerve with me because it makes me feel like I’m allowing the same thing to happen to me and I’m becoming what I hated most in my father.

Kiana’s response: So talking about me & pushing up on me make you feel more of a man.

Kiana tells In Touch she only wanted the best for Chet when they first started dating in 2019. He relied on her to organize his life when he encountered problems, especially after his famous parents “cut him off” because after years of sobriety, “he was smoking weed and drinking alcohol” again, she claims…

Chet blamed his parents and “his childhood” for his problems, says Kiana. He would complain to her “about how he was ignored as a child and just sad little things… From what he told me he had everything, but emotionally his childhood just wasn’t the best.”

She claims he also told Kiana he felt “emotionally” abandoned by Tom and Rita and that they subjected him to “mental” abuse. “He just wasn’t happy with both of them,” Kiana claims. “He actually told me that his grandmother [who’s since passed away] raised him and all of his good memories he would tell me would be about her,” not Tom and Rita.

I have heard that Rita Wilson can be bitchy, but women are often called that when they know their worth, especially in Hollywood. We’re often called bitchy when we have an equal relationship with a partner and make our opinion heard too. Chet Haze is an abusive POS who thinks being “the man” in a relationship means abusing and controlling his partner. According to his ex, whom I believe, he’s playing the victim and blaming his parents for his situation and his temper. All while he has access to wealth and opportunity that most people can only dream about. I wouldn’t trust anything he says about his parents. I like that Tom and Rita cut Chet off, I hadn’t heard that before, but who knows if it’s even true.

Tom and Rita have one additional child together, Truman, 25, who is very private. I wasn’t able to find out much about him so I’m guessing he turned out fine. Tom has two more children from his first marriage to Samantha Lewes: actor Colin, 43, and Elizabeth, 39.

Chet is doing Cameo to make money. He also makes rap music, which would not be possible with his lack of talent if his parents were not famous. Of course he goes by Chet Hanks on Instagram.