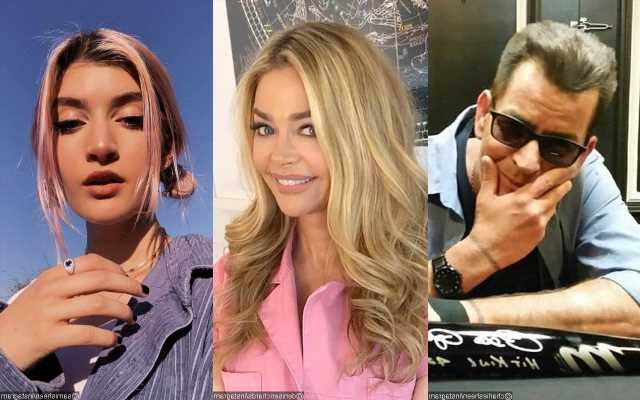 Now that the former couple’s oldest daughter Sami has moved in with the former ‘Two and a Half Men’ star, he no longer has to pay his ex-wife child support.

AceShowbiz –Charlie Sheen has one less financial liability toward his ex Denise Richards. The actor has officially cut his ex-wife of child support after their eldest daughter Sami moved in with him, following her abusive household claims.

On Monday, October 4, the “Anger Management” alum’s request to stop paying Denise child support was granted by a judge. The 56-year-old actor filed a request for an order to change the exes’ child support arrangement in December 2019. During the court hearing, judge Alexander Giza noted that the actress did not file any opposition paperwork.

Speaking to Us Weekly outside the courthouse after the ruling, Charlie said, “I think what transpired today is extremely fair.” The “Platoon” star, who appeared to be in good spirits, added, “It speaks to not just today, but it speaks historically to that same fairness.”

Charlie attended the hearing with his attorney Gregory Pedrick, who asked the judge to order “zero child support” for Denise because his client has had full custody the exes’ two daughters since April this year. The attorney went on claiming that the former “Two and a Half Men” star was overpaying monthly in child support, but his client chose not to recoup the funds.

The judge’s order comes less than a month after the former spouses’ eldest daughter Sami made a shocking allegation against her mother on TikTok. In videos posted on his page which she has since set as private, the 17-year-old girl claimed she was “trapped in an abusive household” when living with her mother.

“(I) hated myself, would go days without eating or sleeping, insanely depressed, hated school, etc…,” she confessed, before adding in a happier video, “now: finally moved out of the hell house, had a spiritual awakening, own 2 cats, happy single, full of self love, and dropped out of high school.” Charlie then confirmed that Sami has moved in with him amid the drama.

Meanwhile, a source said that Denise was “saddened” by Sami’s allegation. “Denise is just like any other divorce parent dealing with a rebellious teenage daughter,” the so-called insider claimed, with a second source arguing that the “Starship Troopers” star just wanted her girls to have “boundaries.”