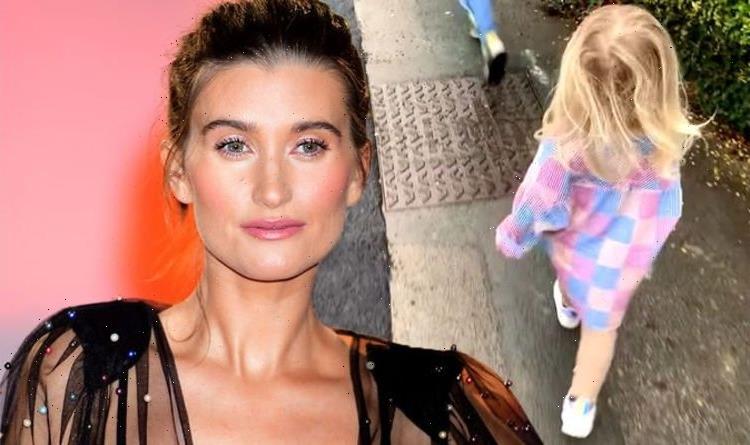 Charley Webb gets ‘Christmas pancakes’ with her children

Charley Webb, 33, took to social media to share a cute candid video of her son toddling along in pursuit of “Christmas pancakes”. The clip comes as news continues to circulate about the star quitting Emmerdale, where she plays iconic character Debbie Dingle.

Posting on her story to her 547,000 followers, Charley shared the video of her youngest, two-year-old Ace, running along the pavement in an adorable brightly coloured shirt, before stretching out his arms for his mum to pick him up.

The track Santa Clause is Coming to Town by the Jackson 5 could be heard playing in the background.

“And then, ‘Carry me’,” Charley added with a love heart in reference to Ace.

Charley, who has a number of close ties to the Emmerdale cast, is reportedly choosing to step down from the soap permanently after 19 years.

The news comes after her husband Matthew was caught up in a racism bullying row on set.

Charley last appeared on screen at the beginning of 2021, and an inside source has now told The Sun that she had no plans to return.

The insider said: “Charley is closing the door on Emmerdale for good and won’t be going back.

“After she gave birth to her third child with Matthew in 2019 she returned briefly before taking some time out again.

“The past few months have given her time to think about the future and it is one that doesn’t involve Emmerdale.

“Matthew being caught up in the row on set fuelled her decision to step away.

Helen Flanagan surprised with HOUSE by fiancé after lie [INSIGHT]

“Charley has been on Emmerdale for 19 years and her character Debbie has had a rollercoaster ride. It’s time for a new adventure for Charley.

“Naturally the door is open for her character, who is now living in Scotland, should she change her mind. But for now she is looking to the future.”

An ITV spokesperson told Express.co.uk: “There is no further comment. For your guidance, Charley left the show early this year.”

There were first claims at the beginning of November that Matthew, who plays David Metcalfe in the show, had made an inappropriate comment to a mixed-race actress.

The aforementioned publication also reported that he and his co-star Isabel Hodgins, who plays Victoria Sugden, were facing allegations they mimicked the actress’ accent.

A source stated: “It is common knowledge on set that Matthew and Isabel are not filming at the moment following a complaint.

“This all came about after a conversation between them and another actress — during which the alleged remark was made.

“An accusation was also made that the actress’ accent had been mimicked.”

The actors reportedly had a row with Aaron Anthony, who plays Ellis Chapman, leaving people on set “feeling uncomfortable”, according to The Sun’s sources.

The publication went on to clarify that the pair had categorically denied all the allegations and any wrongdoing, suggesting that there had instead been a misunderstanding.