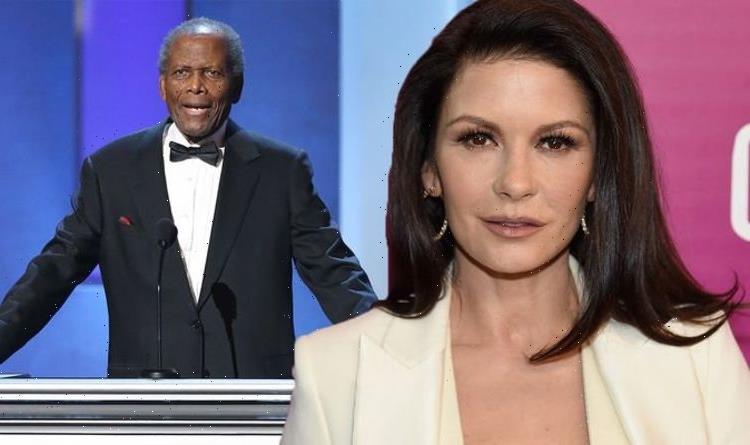 Sir Sidney Poitier made history as the first black man ever to win the Best Actor Oscar and, up until his death, carried the title of the oldest living man to have won the award. A number of high profile figures have taken to social media to pay tribute to the Hollywood star, who was known for films including Guess Who’s Coming to Dinner and Lilies of the Field.

Catherine Zeta-Jones, 52, took to Instagram to say goodbye to the acting legend, including a picture of him waving and smiling, dressed in a tuxedo.

Addressing her 3.9 million followers, she shared her own moving memory of time she had spent with the late actor: “Farewell Mr. Poitier. One cherished moment was hitting golf balls with you on the driving range at the club.

“So many more in admiration of you and your craft as an actor. God Bless.”

Star Trek legend George Takei, 84, also took to Twitter to pay tribute to Sir Sidney, who he described as a “trailblazer” to his 3.2 million followers.

He wrote: “Sidney Poitier, the first Black man to win an Oscar, has died at the age of 94.

“The star of “Guess Who’s Coming To Dinner” and “Lilies of the Field,” for which he won Best Actor, was a trailblazer who will be mourned by so many for whom he opened the very doors of Hollywood.”

Famous movie star Joseph Gordon-Levitt, 40, also wanted to pay his respects to the actor via social media, writing in view of his four million Twitter followers: “Sidney Poitier. An absolute legend. One of the greats.”

The star then posted black and white pictures of the star in his youth, as well as a more recent photo of Barack Obama honouring him with a medal.

In 2009, the former President awarded him the Presidential Medal of Freedom, saying that the actor “not only entertained but enlightened … revealing the power of the silver screen to bring us closer together”.

Sir Sidney was also once a board member of Disney, and its ex-CEO Robert Iger was yet another high-profile figure to pay his respects.

He wrote: “Former @disney board member Sidney Poitier was the most dignified man I’ve ever met.

Westworld and James Bond actor Jeffrey Wright also paid tribute to the Bahamian actor, whom he once starred alongside in the TV mini series Separate But Equal.

Jeffrey wrote: “Sidney Poitier. What a landmark actor. One of a kind. What a beautiful, gracious, warm, genuinely regal man. RIP, Sir. With love.”

Meanwhile in the UK, a number of other stars also wanted to pay tribute to Sir Sidney, whose legacy is known all around the world.

Alongside a picture of the actor, Strictly Come Dancing judge Motsi Mabuse tweeted: “R.I.P ‘To simply wake up every morning a better person than when I went to bed.’ Sidney Poitier.”

Journalist Piers Morgan wrote: “RIP Sidney Poitier, 94. When he answered an ad for actors, as an illiterate young man, the theatre owner sneered: ‘Go be a dishwasher.’

“Sidney already was a dishwasher. Stung by the jibe, he vowed to prove him wrong.

“He became the first black man to win the Best Actor Oscar.”

The news of Sir Sidney’s death was confirmed earlier today by Bahamian Minister of Foreign Affairs Fred Mitchell, but details about the cause of his death have not yet been released.