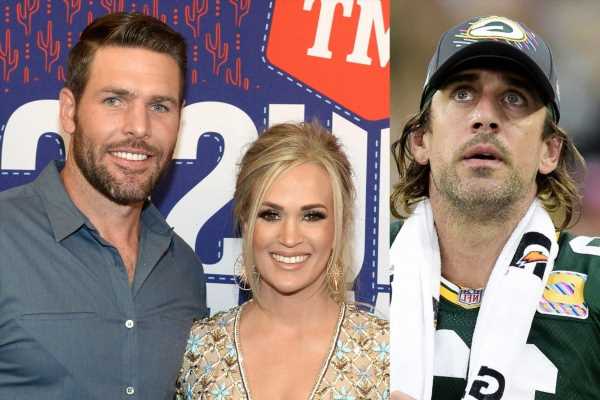 Aaron Rodgers has been at the center of a firestorm after he pushed back on the coronavirus (COVID-19) vaccines. The National Football League (NFL) star tested positive for the virus and has been shut out of playing following protocols set by the organization. Rodgers has been called out on social media and sports commentators for lying about his vaccination status — something the football player denies doing. Now Carrie Underwood’s husband, Mike Fisher, is standing by Rodgers and his claims which has caused a division within his fans on Instagram.

Fisher, a former National Hockey League (NHL) player, is sticking up for Rodgers amid the scandal over his COVID-19 vaccination status. The NFL does not mandate their players to get vaccinated but there are different protocols depending on the vaccination status. Rodgers had said back in August he had been “immunized,” which led many to believe he had gotten the vaccine.

However, Rodgers has now come out to say publicly that he didn’t get the shot and instead recurred to alternative treatments. Much of the flack Rodgers has received in the media is due to him deceiving fans, not because he didn’t get the vaccine. This detail has escaped some of Rodgers’ supporters, which include Fisher, who has made it about pushing back on a vaccine mandate.

“I stand with [Aaron Rodgers],” Fisher posted on Instagram. “I believe in the freedom to choose what we put in our bodies and the freedom of conscience, I agree with him in that the science clearly shows the vaccinated spread covid at basically the same rate as the unvaccinated.”

Mike Fisher calls for people to ‘stand up now’

Fisher said that the NHL and NFL have ignored the science “to coerce and punish unvaccinated players with these restrictions.”

“These past 2 years has clearly shown us that this is not about our health, it’s about control over our lives. I won’t stand for that,” he added. “It’s time to fight for our medical freedom and I feel for those that have been fired for choosing medical freedom. People losing their jobs over a medical choice is un-American and unacceptable. We need to stand up now before it’s too late!!”

Furthermore, Fisher sparked a debate in the comments of his post about vaccines. Some argued for Fisher’s point and others argued against it — dividing his followers.

“I agree we should have the choice, but he should not have lied. Period. Dot. The end,” a fan replied.

“I stand with YOU and your decision to support medical freedom!” a follower said.

“Amen!! Ditto! Let’s get healthy as Americans and allow Jesus to guide our paths!” an Instagram user noted.

“It’s also called freedom for employers to mandate certain things for their employees. Work somewhere else then,” another fan pointed out.

“He lied. And you’re religious, yes?” another follower commented.