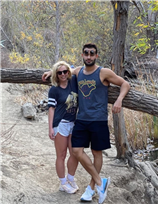 Over the past few weeks, the public has been granted unprecedented access to the private life of one of the world’s most iconic pop stars.

Britney Spears has ranked among the most famous people on the planet since her teen years, but it took a nasty legal battle and a devastating family feud to shed light on the painful reality of her day-to-day life.

Currently, Britney is attempting to free herself from a conservatorship controlled by her father, who has denied her many of the basic freedoms of adulthood.

The fight certainly hasn’t been easy, and it’s caused Britney to come into conflict with some of the most important people in her life — but there’s one ally who’s been in her corner from the start.

Britney and Sam have been together since 2017, which means that for as long as he’s known her, she’s been bristling under the restraints imposed on her by her own father.

Last month an audio recording of Britney’s testimony at a conservatorship hearing was released online.

The singer shared several horrifying aspects of her current arrangement.

Not surprisingly, the one that attracted the most attention and the sharpest condemnations was the revelation that Spears has been forced to use an IUD against her will.

Britney suggested that were it not for her conservatorship, she would be married to Asghari and the two of them would be welcoming a child together.

But a new report from TMZ is calling those claims into question and suggesting that Asghari has shown little interest in taking those steps with Spears.

Inside sources have reportedly confirmed to the site that while Britney and Sam have discussed marriage, he has never proposed, and he seems to have no intention of doing so in the near future.

And apparently there’s no reason to believe that his hesitation is a result of the conservatorship.

According to TMZ, Britney’s father and her personal conservator both say there are no restrictions on Britney with regards to marriage or motherhood.

Jamie Spears has shown himself to be a less than reliable source on these matters, but it’s worth noting that his claim is echoed by conservator Jodi Montgomery, who has shown herself to be an ally to Britney in recent months.

At the end of the day, of course, we have no way of knowing Sam’s intentions, or what he and Britney would do if they weren’t bound by the terms of the conservatorship.

So once again, fans are left to dissect Britney’s every social media post in search of information about her personal life.

And they think the photo below is worth a thousand words.

Or more accurately, they think Brit’s caption tells us everything we need to know about her plans for the future.

“@SamAsghari looks like such a dad in these pics,” the singer wrote.

Is she suggesting that she’d like to make Sam a dad sooner rather than later?

That certainly seems to be the case — of course these days, Brit already has a whole lot on her plate.