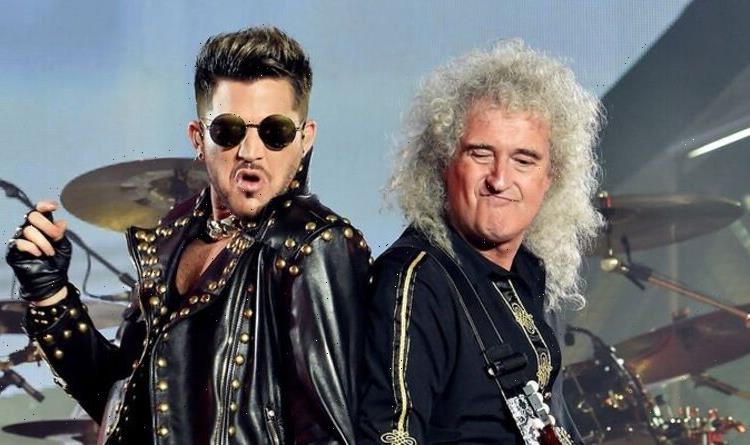 Brian May guest stars in CBBC show Andy and the Band

Adam Lambert will star on Starstruck tonight on ITV. Olly Murs hosts as four more teams of super-fans are transformed into their music idols before stepping onto the stage to sing one of their biggest hits. Panellists Adam, Sheridan Smith, Beverley Knight and Jason Manford decide their favourite of the night before the voting audience picks just one person to go through to the series final. Adam has been the lead singer of Queen since 2011, filling the shoes of the great Freddie Mercury.

The journey of Queen and its legendary frontman Freddie, who died in 1991, is depicted in the film Bohemian Rhapsody, starring Rami Malek, which is airing at 9pm tonight on Channel 4.

Brain May defended Adam’s Queen role in 2018, adding that Freddie would have had mixed feelings about him, due to his talent.

He told Yahoo: “Freddie would love and hate him, because Adam has a real gift from God.

“It’s a voice in a billion, nobody has that range, nobody that I’ve ever worked with, not just the range, but the quality throughout the range.

However, he later said in 2019 that he believes Freddie would have “approved” of his replacement.

The guitarist called Adam a “true phenomenon”, adding on social media: “And here is the Modern Marvel without whom, for sure, Queen would not be out here delivering at the top level.

“Adam Lambert is only now beginning to be recognised by the greater public as the true phenomenon that he is.”

He continued: “Gifted with a voice in a billion, for himself he is a passionate and unyielding perfectionist. Gifted to us, he is the reason that we are still alive as a functioning rock band.

“And still able to take on new challenges. Plus … he’s nice. That’s a big deal when you’re a touring family. Freddie would approve, big time.”

Brian then took aim at people who had criticised Lambert.

He added: “Also, and I will say this only once, for the benefit of just a few people who haven’t stopped to think clearly.

“Just imagine how awful it would have been for Roger [Taylor] and myself to tour with a Freddie impersonator.

“Anyone who suggests such a thing doesn’t belong here. To the vast majority of you lovely people out there – big thanks for being respectful to Adam.

“In supporting him, you are supporting the lifeblood of the live Queen legacy. Nothing is forever. This is a precious moment. We never pass this way again.”

In June 2019, Brian also made the bold claim that Adam has just as much, if not more vocal range than Freddie.

He told Guitar World: “Adam can do all the stuff that Freddie did and more. It doesn’t matter what you throw at Adam — he can do it.

“He’s a born exhibitionist. He’s not Freddie, and he’s not pretending to be him, but he has a parallel set of equipment.”

Adam admitted recently that, before his very first performance with Queen, he was “intimidated” by the prospect of matching the singing prowess of Freddie.

He and Brian recalled the 2012 charity gig for Lets Stop AIDS in a recent episode of ‘Queen the Greatest’.

Adam remembered: “All of us sat down and we had a drink, and there was a sense of camaraderie in that moment about ‘Look what we just did. This feels good. I like you. I like you. You like me.’

“It was an instant sense of sort of comfort and ease that we all had with each other.

“We all sort of got a kick out of each other and felt like the right fit, it felt good.”

Brian added: “With Adam, by the time we got together, we kind of knew, yeah, because we’d seen enough of him and we thought, ‘Yeah, this is going to work.’

“You know, Adam comes with a certain amount of pedigree because he’s done his solo stuff with a lot of success.

“So then we sat down together and said, ‘Well, what could we do? We could do a little bit of a tour. We could try something here, try something there.’

“And it gradually took shape. And before we knew it, we were operating with Adam.”