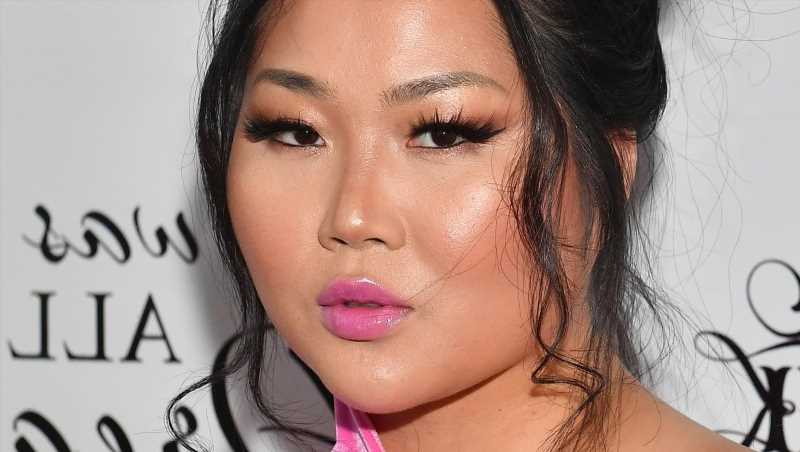 With the return of VH1’s “Black Ink Crew New York,” Young Bae is back on our screens once more, alongside her cast mates, Puma Robinson and Ceaser Emanuel. Season 9 of the hit VH1 reality show promises a lot of drama, and will also show how everyone’s favorite tattoo artists have navigated the COVID-19 pandemic. As Young Bae’s co-star Puma recently revealed to Nicki Swift, “I was maybe one of the most worried people because I have children. We’ve been following a lot of protocols, a lot of testing, so everything’s been all right.” And Young Bae, too, found herself faced with some challenges during the pandemic.

Alongside her work as an in-demand tattoo artist, Young Bae is busy raising her son, Nico, and developing a chic activewear line so that women can go to lunch from the gym without compromising their style. Nicki Swift caught up with the reality star to find out all about “Black Ink Crew New York” Season 9, why she removed her breast implants, and what’s next for her business.

So the new season of “Black Ink Crew New York” is out, and it was filmed during the pandemic. Was it difficult to shoot?

I mean, we are still in the pandemic, right? We are still, right? It’s not over. So yeah, it’s overwhelming and it’s so different, but we take it day by day. We’ve been doing good, I think. It’s just so different. It was hard when we went to Atlanta. It’s better, actually, here in New York, because in New York, they do a lot of … if you don’t wear a mask, you can’t go here. You can’t go there. In Atlanta where we went, it was just like, you’re free to do whatever. People just didn’t know how to act, because we were locked up in the house for a whole year and then now all of a sudden, free! You can do whatever you want.

So that was a good feeling?

It was good, and a little nerve racking. Just a little bit, because I’m still scared. I had my son with me and everything.

So your son Nico is on the show. What can fans expect to see from your family this season? Are there any surprises ahead?

Surprises? Surprise is my son [is now] talking a lot. Because last time when he was on the show, he was literally crawling. Now he’s walking, running, jumping, talking. Sometimes rude.

Yeah. Terrible twos. People always said that. I’m like, “What do you mean?” My son is an angel, but …

So we’re going to see all of that?

Yeah, but I love my son.

Your journey to success hasn’t always been easy. When you arrived in New York for the first time you only had $80. Did you have any idea what your career would become and what you wanted?

When I came here, I was clueless on everything. Literally. I didn’t speak any English. I didn’t have any family members or friends. Nothing. I was just full of dreams and hopes: “Everything’s going to be okay. This is amazing. Wow. New York, I made it already!”

But did you have any idea you were going to be on TV?

Of course not! TV? I was trying to see if I could eat. “How am I going to eat my next meal?” That was my concern. TV? What TV? I didn’t even have a TV in my room to watch. You know TV?

And now you’re on the TV. So it worked out.

God is crazy. He just works in mysterious ways.

You’re an award-winning artist, but before you came to New York, you hadn’t really thought about tattooing because it was illegal where you grew up in South Korea. So what drew you to becoming a tattoo artist?

All my life, I was an artist. And I’m still an artist. I’ve never stopped painting since I was a baby. I graduated from art university in Korea and everything. I didn’t know I was going to be a tattoo artist, but I knew eventually I was going to do something artistic. I knew how to draw already, so that part was there. I didn’t have to practice drawing, but I just had to learn about different types of skin and different skin reflections and all that. Because it’s really different, how I have to tattoo Asian skin or Black skin or white skin. It’s all different, because we all have different types of skin and color. I have to work with skin, and that took me a little while to learn. But as far as drawing and making designs, that’s what I was born to do.

You recently revealed that you’d had your breast implants removed. What led to that decision and are you happy now that it’s done?

I feel so great and healthy, and this is so amazing. What led to that decision? It was my sickness. I had my breasts done about 10 years ago, and I started getting sick five years ago. And I had no idea, because every time I go to the doctor, they’d be like, “What are you talking about? You’re healthy. Everything’s coming out normal.” But I literally had like 20 symptoms. And it started five years ago. It started from little brain fogs, and this and that. I’m throwing up every day and I feel dizzy every day. [I] ended up feeling like I was dying, literally every day. So then I really thought I was dying. I really don’t want to say that, but that’s the truth. I felt like I was dying for about three years now. Not now, but like three years. But then corona happened and we did quarantine. So I’m listening to my body a little more now, because I’m not working all the time and whatever.

So I’m laying down one day. I have this shooting pain coming from the back to my nipple area — like a shooting pain. It’s so weird. Oh my God. I’ve been feeling sick for five years. Now it’s this? Oh my God. And then after that I started getting rashes on this area. So I’m like, you know what, f**k this. I’m just going to take my implants out. Maybe I’ll feel better. So as soon as the quarantine was over, I made a little money at my shop, and then I made an appointment with a plastic surgeon. I just told him I want to take my implants out. He was like, “Why?” “I don’t know. I just want to take them out.”

So I made an appointment. I paid for the surgery fully. I had no idea until then what a breast implant illness was. Nothing. Not knowing anything, I paid for the surgery to take them out, and then I’m waiting for my surgery date — watching YouTube on how to raise kids and how to discipline toddlers, things like that. And then all of a sudden, breast implant illness popped out on my timeline on YouTube. I’m like, “What’s that?” And I clicked. Oh my God. Everything started making sense.

Young Bae: So I literally paid for the whole surgery, not knowing what a breast implant illness was, and I found out after. So I feel like, oh my God, I think I really have that. When I took them out, brand new. I got my life back. All my symptoms went away right away. I had about 20 symptoms, and it went away instantly except for one: brain fog. But that’s getting better little by little. I’m so much better now. If you asked me what I had for breakfast now, I can remember. I could tell you what I had for breakfast. Before I couldn’t. I’d be like, what? Now, I had a waffle for breakfast, honey.

That’s so scary, that no one knew what your symptoms were caused by, and you had to figure it out for yourself.

It is! I know. And it was so crazy that a lot of women go through this in real life, and there’s no doctor, or nobody’s telling you there’s this thing called breast implant illness. We really have to figure this out ourselves, because you don’t get sick right away. Some women do, but a lot of women don’t. So how are you supposed to know? “Oh, my face feels like it’s on fire. It must be from my breast implant illness.” Who would think that? It’s weird.

That’s why it’s good that you’re speaking out.

So you’ve also spoken out about Stop Asian Hate, and you’ve revealed some of the discrimination that you’ve faced. What can viewers do to help stop the abuse that’s going on?

I’m trying to do a lot of things right now. I am Asian. I go through this myself, but also I’m clueless on what’s been happening, because I’m new to this country. I’m an immigrant woman. I didn’t grow up here. I just moved to this country. So me, I’m educating myself on Asian history in America. So I’m learning every day now, and also trying to figure out a way to help our community. Not just the Asian community. Asian community, yes, but I want to fight racism, period. Towards any race. Because we’re all the same at the end of the day. It’s like, what? We are all the same. We bleed the same blood. We are human beings. We are the same. And I hope, when my son grows up, he will live in an era that’s a lot better than the era I lived in.

Young Bae is passionate about activewear

You started an active wear brand, 2one2 Apparel. What’s next for your business?

I am trying really hard to hit stores now, and just trying to expand, because it’s been my dream to have a workout apparel line of my own. Because I used to work out all the time. Work out a lot. And it wasn’t so flattering, what I was wearing. So I’m like, “Oh, when I have enough money one day, I’m going to do this. I’m going to do that. I’m going to make my waist look so little, and then my butt a lot bigger than this.” That, and I wanted to go to the gym and work out, and then go have lunch with my friends after. Because I’m cute in my workout apparel, you know what I’m saying? So that’s where the idea came from. It’s been going really good. Thank you for asking.

Have you got lots more products coming out?

No, for now I’m going to stay [with the] comfortable, cute, city girl-looking workout line. Also workout gears. Yeah. That’s what I’m going to do.

And is there anything else you want people to know about the new season of “Black Ink Crew New York”?

You can catch all of the drama on “Black Ink Crew New York” Season 9 on Monday nights on VH1.