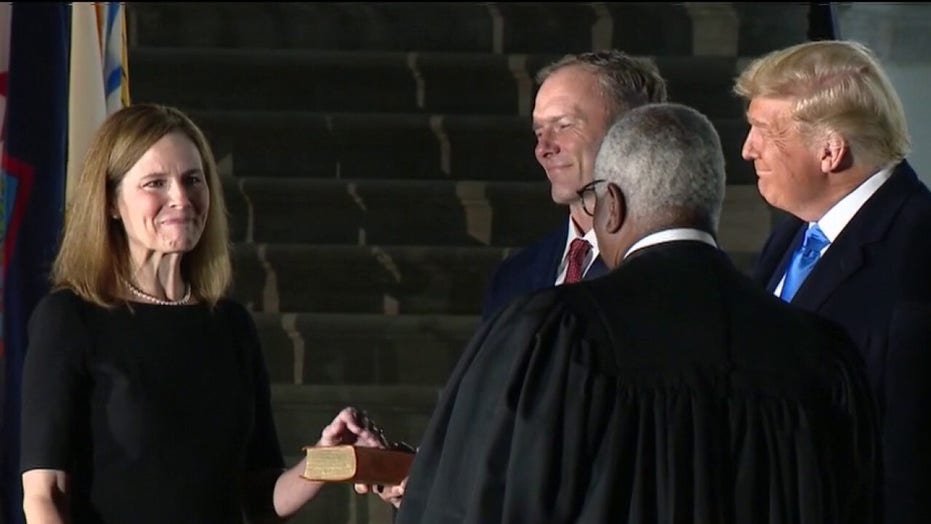 How Justice Barrett’s confirmation will impact the Supreme Court

"Real Time" host Bill Maher had some harsh words for the late Justice Ruth Bader Ginsburg, whose death paved the way for the confirmation of Justice Amy Coney Barrett.

During a Monday night appearance on "Jimmy Kimmel Live," Maher was asked about the moment when news of Ginsburg's death broke while he was taping his show and Jimmy Kimmel expressed his amazement at how his panel was "exactly right" at predicting how events that were going to play out.

"Well, it's not like her death was a shock," Maher said.

"Well, it was — it was, though," Kimmel responded.

"You think so?" Kimmel asked.

"Of course!" Maher exclaimed. "Because then we wouldn't have nutso!" — referring to Barrett.

Kimmel then asked Maher when Ginsburg should have quit, which prompted him point to the 2013 lunch she reportedly had with President Obama, who apparently urged her to retire while he was still in office.

"The Democratic plan for the Supreme Court was 'Ruth Bader Ginsburg doesn't die.' And that's why they're such a loser party," Maher explained while making an "L" sign on his forehead. "I vote for them, but they don't know how to do politics. I mean, Obama did have her over to the office, you know, when he was still in office to hint."

"Oh, you think that's why … " Kimmel responded with surprise.

"Of course! We know that's why," Maher quickly told Kimmel. "He wasn't the sociable kind of guy. There was always a purpose to a meeting with him. So it was just like, 'Hey, boy, that Supreme Court is an important place, huh … and you're getting up in age.' And she should've taken the hint. I mean, as great as she was in many ways, that really put us in a bad place because as I keep trying to say on my show, power begets power. When you lose power, you keep losing it."

He continued, "We lose presidential elections, they appoint justices, so now the Supreme Court is 6-3. That's going to go on for a very long time. If the election winds up in the court, who do you think they're going to go with? We saw what happened with Bush v. Gore. That's what I mean. You lose power and then you lose it again."

Maher was previously outspoken against Barrett's nomination to the Supreme Court, calling her a "f—ing nut" and comparing her to the "Terminator" who was sent to overturn Roe v. Wade.