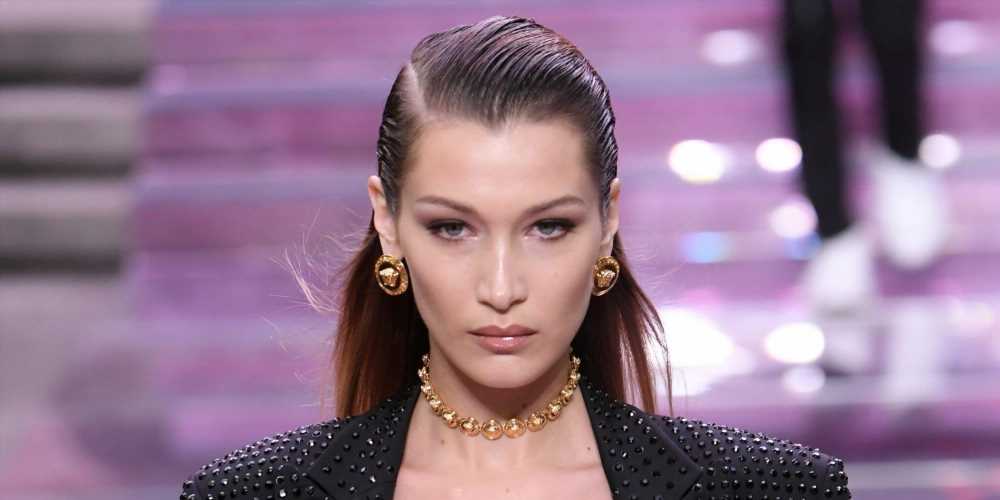 Bella Hadid is proving that she's still one of the hottest commodities on and off the runway. Versace, which recently enlisted her brother's girlfriend, superstar Dua Lipa, chose Hadid to front its latest campaign for the Virtus collection and the images are classic Versace — with a very 2021 twist. The new images include Hadid in what's becoming a signature for her: a tiny cardigan. And although she's no stranger to flashing skin under the skimpy style, this time around, she's got a peekaboo bra under, complete with Versace's signature gold Medusa-head logo on the strap.

Mert and Marcus shot the images, which also include Hadid in a huge '60s hairdo and, of course, showing off new Versace handbags. This time, they're black, quilted styles with chain straps and bold V logos.

"Goddess unleashed – the #VersaceVirtus collection takes its name from the Roman deity symbolizing strength and courage. @bellahadid channels her inner and outer goddess in the new campaign," the brand wrote alongside the new photos. A big bangle and hoop earrings finished off her look.

"An Honor every single time," Hadid commented on the debut post.

And while a Versace campaign is plenty to celebrate, Hadid's list of accomplishments doesn't stop there. She's continuing her longstanding relationship with Michael Kors and fronting its James Bond-inspired collection alongside Cindy Bruna. Call it an audition for Hadid's turn as a Bond girl — which she says she channeled during the shoot.

"I love the independence and the multifaceted character of each different Bond girl," Hadid said in a statement. "She can be anything and everything. Anywhere and nowhere. Classic, cool and independent."