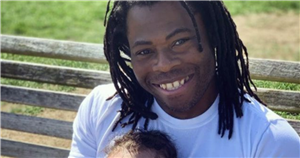 BBC TV presenter Ade Adepitan said “it was bonkers” that people mistook his baby boy for a teddy bear while out with his son on multiple occasions.

The former Paralympian, 48, could not believe that people thought he was travelling with a teddy bear in his arms whilst he was seen out with his son, Bolla, during the national lockdown.

Speaking to the Mirror, he said: “Bolla has got a bear suit and he looks super cute in it. We put him in it when we go for a walk.

“When I told her I hadn’t, she replied ‘Oh my goodness, you have got a real baby’. She was freaked out.

He continued: “I asked her what made her think I would go to a shop with a teddy bear and she said, ‘You don’t know what people are into these days!”

“I thought maybe it was just her but when I was going home via the park, I passed a bench and a lady said, ‘Oh isn’t that cute, look at that guy in a wheelchair with the teddy bear.’

“It was bonkers that people thought it was more realistic that I could be carrying a teddy bear on my lap.”

Ade and his partner Scottish singer Elle Exxe, otherwise known as Linda Harrison, 30, welcomed their first child, Bolla, back in January and have been gushing over him ever since.

The happy couple have made the most of their extra time together during the lockdown, with the TV host admitting that “if I had been working, I would have hardly seen him.”

Ade, who is the new host of a BBC2 series on climate change, announced the news to his 15,500 followers on Instagram with a cute snap of the latest addition to the family after he arrived a week earlier than expected.

He captioned the post: “Baby Bolla Harrison Adepitan is here! According to our due date he was supposed to arrive today, instead he turned up a week early taking us all by surprise. His arrival has been a blessing.”

The former basketball player, who has now gone on to do amazing work with Children In Need, then went on to write a poem about the early days of fatherhood, which he dedicated to his son.

“We might be a little sleep deprived but we’re so grateful that Bolla has arrived!

“Occasionally he gives us a few tears, but that doesn’t matter because grandma is so happy she’s been waiting for years.

“Massive thanks to all our amazing friends and family, your kind messages and generous gifts we’ve received gladly.

“Thank you Bolla eight days with you and we’ve fallen in love truly, deeply, madly.”