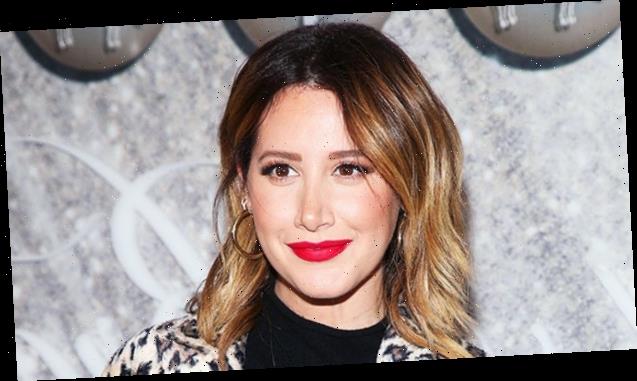 Congratulations are in order for ‘HSM’ star Ashley Tisdale and her hubby Chris French, who have welcomed a baby girl!

And baby makes three! Ashley Tisdale, 35, is officially a mom, having welcomed a beautiful baby girl with husband Chris French. The High School Musical star revealed she gave birth to little Jupiter Iris French on March 23, 2021, with a sweet Instagram post, which you can see below! The photo featured little Jupiter’s hand intertwined with her adoring mom and dad’s fingers. In the caption, Ashley officially revealed her baby girl’s name and the date of her birth. “Jupiter Iris French arrived earth side,” she wrote, adding the March 23, 2021, date.

Ashley first announced the exciting news on September 17, letting fans know that she and Chris had a baby on the way. The blonde beauty shared two beautiful photos of herself standing beside her beau amid a bunch of luscious greenery with her baby bump on clear display. She rocked a gorgeous white dress while they happily looked down as her growing belly in one snap and smiled adorably at one another in the second shot.

A couple of months later, the couple officially revealed the gender of their baby with a photo of them cutting open a cake. Ashley was visibly shocked to see bright pink sprinkles spilling out of the cake when she cut into it. “This year has obviously been hard. For so many. Ups and downs, and an emotional roller coaster. I think this day was by far my favorite day EVER,” she captioned her October 16 gender reveal post. “I cried I was so happy. Ps for all you people going above and beyond for gender reveal parties. A cake with the color inside is JUST as rewarding as fireworks but SAFER!”

Fans of the former Disney star were so excited by her pregnancy news, and couldn’t help referencing her legendary character from the High School Musical movies when congratulating. “OMG I’m screaming !! congratssssss Sharpay Evans is pregnant,” one follower wrote. The couple enjoyed their time together as a duo for a number of years, before welcoming their little one. They got engaged way back in 2013 before tying the knot in an intimate ceremony in Santa Barbara, California in 2014. Her HSM costar Vanessa Hudgens was even one of her bridesmaids!