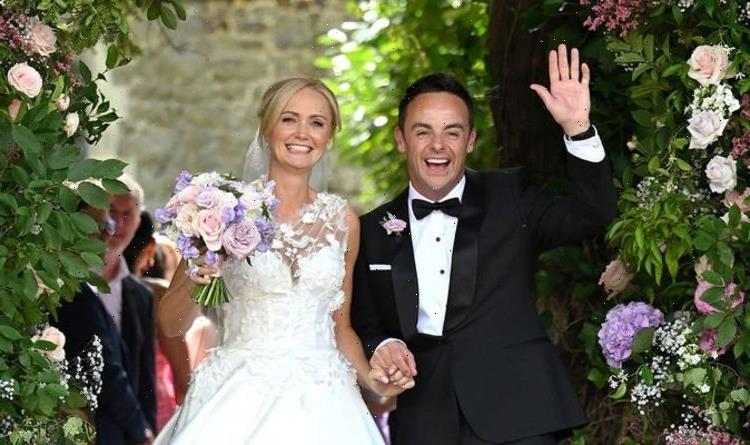 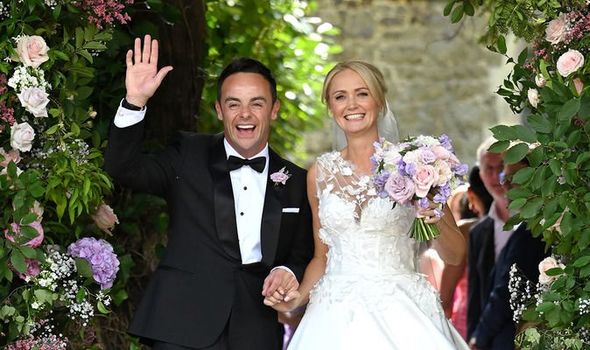 The I’m A Celebrity… star tied the knot with his former PA and partner of over three years at St Michael’s Church in Heckfield, Hampshire, yesterday. The sun shone for the newlyweds after heavy downpours earlier in the day and the pair sealed their union with a kiss under a floral arch of hydrangeas and roses outside the beautiful country church. Family and friends gathered outside as fans cheered the couple.

The bride, 43, wore an elegant floor-length white dress by designer Suzanne Neville that featured an off-the-shoulder design with lace detailing and a long veil and she carried a bunch of white and purple roses.

Ant, 45, and his best man and TV sidekick Declan Donnelly wore matching dinner suits with bow ties and beamed as they posed together after the service.

The newlyweds then left in a black Rolls-Royce, heading to the reception at a nearby luxury hotel, where the guests were staying.

As he left the church, This Morning host Phillip Schofield, below, who attended with wife Stephanie Lowe, said: “It was amazing and great fun. Really enjoyed it.”

Comedian David Walliams, at the ceremony with model Keeley Hazell, added: “It was very romantic and very fun. They’ve both got great senses of humour.”

Singer and former Britain’s Got Talent judge Alesha Dixon was there with her husband Azuka Ononye.

And former footballer Frank Lampard and his television presenter wife Christine were also among the attendees.

It was a who’s who rollcall of TV names with Stephen Mulhern and Andi Peters supporting the couple.

But Amanda Holden apologised for missing the special day, writing on Instagram: “Sending our love and huge congratulations to Ant & Amzie on this amazing day.”

Earlier, Ant and Dec, who have been friends since they shot to fame as child actors in the TV drama Byker Grove, had greeted fans as they arrived at the church.

The bride then arrived and posed for pictures under the floral arch with her bridesmaids, who were also dressed in white with purple waistbands, before going inside for the service.

Anne-Marie started working as Ant’s assistant in 2017 and in June that year he checked into rehab for addiction to painkillers which he said he developed after having a knee operation in 2015.

He has described Anne-Marie as his “rock” after she supported him following his 2018 drink-driving arrest and stint in rehab.

In March that year his Mini collided with two other cars in Richmond, south London. He later pleaded guilty to drink-driving and was fined £86,000 and banned from getting behind the wheel for 20 months. But the crash at one point threatened to his end his stellar showbusiness career with Dec, 45, which dated back to 1989.

After another stint in rehab, Ant and Anne-Marie seemed inseparable and her support is credited with him remaining sober and helping to save his career.

The Geordie took a break from TV presenting for the rest of 2018 but returned alongside Dec at the Britain’s Got Talent auditions in January 2019.

Ant and Lisa finalised their divorce last April and in December during the final of the last series of I’m A Celebrity… he confessed his “happy place” would be “at home with my girlfriend and the kids”.

The TV host, who spent the lockdowns with Anne-Marie and her two teenage daughters, proposed on Christmas Eve.

Anne-Marie’s daughters are from her relationship with former husband Scott Corbett.

The pair were reportedly planning to marry abroad but opted to host the ceremony in the UK because of the pandemic.