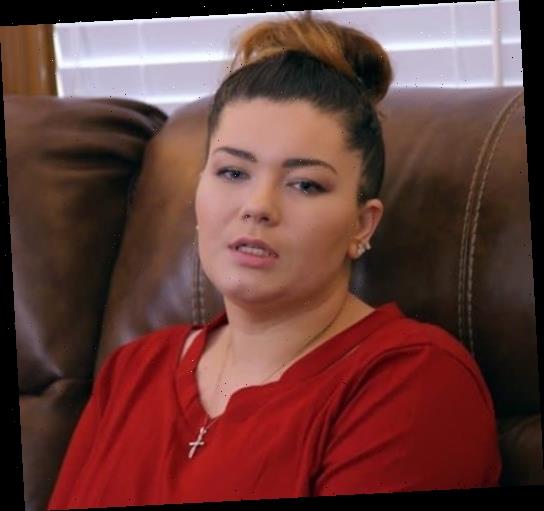 Recently, Teen Mom OG fans saw that Leah has a solid grasp on Amber Portwood’s role in her life.

Naturally, Amber is looking for someone to blame, and she’ll search everywhere but a mirror.

Here chosen target is Kristina Shirley, whose status as a “bonus mom” she challenges … to say the least.

“How does it feel knowing she doesn’t have joint custody of her daughter the same as me,” she wrote.

Amber continued her accusatory message: “because [she] chose this life over her.”

“[She] has no excuse for that,” Amber declared.

“Not one thing!” she exclaimed.

Amber blasted Kristina: “She should be ashamed to even act like she’s such a great mother.”

“SHE HAS NO PICTURES OF HER OWN DAUGHTER ON HER INSTAGRAM,” Amber screeched in all caps.

We should just quickly interject that many people very deliberately do not post photos of their kids, even without custody considerations.

It can be invasive and unsafe … especially when there are unstable personalities with legions of fans involved.

Amber insisted: “Remember I use to talk to HER daughters ‘bonus mom’ and I was told everything!”

“She can’t even have her daughters name mentioned on the show!” Amber taunted.

“People come at me like I’m a mess,” she accurately described of how people view her.

“When the truth is,” Amber’s rant continued, “I’ve been keeping a lot of secrets from people.”

“Where’s her own daughter in any picture?” Amber reiterated, as if this matters.

“Be honest,” she added, as if unable to connect the daughter’s lack of IG pics with the lack of TV appearances.

“Yes I made mistakes,” Amber vastly understated before claiming: “However I have changed for the better!!”

“She’s not a bonus mom,” Amber insisted, revealing how much the kind gesture had struck a nerve.

Instead, she declared of Kristina: “Ahe’s an opportunist!”

Amber went on to describe Kristina as someone “who cries if Gary doesn’t by her a coach bag….”

“And it’s sad,” she expressed, “she chose this over HER family.”

“[She] got scared because me and Leah were hanging out more!!” Amber insisted.

“Sorry I made a mistake in the past with people,” Amber again understated.

“However,” she continued, “we all know what was really going on when ]she[ cheated on her husband.”

“She needs to take some pictures with her kid not mine 24/7,” Amber whined.

“I think theres some guilt issues personally,” Amber theorized in a clownish display of armchair psychology.

“I see her with my daughter compared to hers,” she alleged, “and it’s like she’s not even there.”

“I feel bad for her personally,” Amber claimed.

“People can take this how they want,” Amber acknowledged.

“It is the truth…she is an opportunist,” she accused, “who puts pictures of my daughter on her Instagram for clicks.”

“I said my piece and I’m at peace with this personally,” Amber concluded unconvincingly.

Amber said even more about Kristina in an ill-advice rant on Instagram Live.

This is where Amber repeatedly accused Kristina of being a liar, a homewrecker, and a “whore.”

“Money was stolen from me when I was in prison,” Amber announced.

“I was told that when I got out I would have my family,” Amber complained.

“All the while I was being cheated on,” she griped.

Amber then insisted: “I’m not jealous of Kristina.”

“There’s nothing about Kristina that even makes me jealous in any sense,” Amber claimed.

“And I don’t try to be mean for that one,” she alleged, “I’m just telling the truth.”

Amber then went on to disparage Kristina because … she does nice things for Leah.

“She respects her because she brings her out to Starbucks, gets her nails done, and spends over a thousand something dollars of clothing on her,” Amber claimed.

She continued: “Hell, I’d respect her too. See, I wasn’t raised that way. I was raised to not spoil my child.”

Perhaps Amber would sound more credible as a mother if she had any baby daddies that she hadn’t been arrested for assaulting.

“Why should this be kept to myself when everything else is just put out there?” Amber rationalized.

“Kristina doesn’t do anything for Leah!” she declared. “What does Kristina do?”

One wonders what Amber imagines that she is doing for Leah with this bizarre, vicious attack.

“Be kind to everyone. Be patient with difficult people,” the words read.

That is good advice … and a clear sign that she puts Amber’s rants into a sensible context.