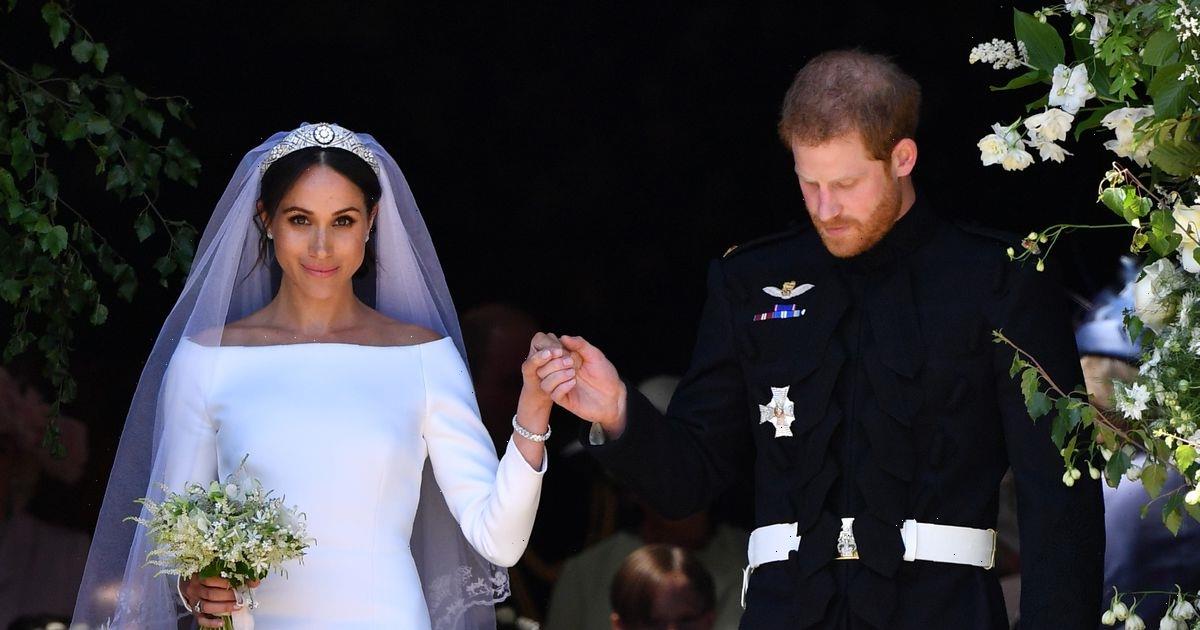 It was a day of celebration, when the whole country came together.

But as Prince Harry and Meghan celebrate their fourth wedding anniversary today, their lives look very different to 2018 – both in private and in public.

No longer working royals, the two have stepped down from their official royal duties, and now live outside of the UK in Meghan's native California.

Their social circle has also evolved, with some of those closest to the couple back in 2018, no longer part of their daily lives.

The pair will be celebrating their fourth anniversary together which will most likely be observed in private at their Californian home with their son Archie and daughter Lilibet.

Here we look at the changes in their social circle since Harry and Meghan became man and wife.

Meghan's father Thomas Markle had been set to walk her down the aisle and play a central role in the wedding.

But after he was caught staging paparazzi photographs, Thomas dropped out of attending his daughter's wedding at the last minute, blaming his health after also suffering a heart attack.

At the time she announced the unhappy development, Meghan sounded conciliatory.

She said: "I have always cared for my father and hope he can be given the space he needs to focus on his health."

However in the following months the pai

r's relationship splintered and they are no longer on speaking terms.

During her memorable interview with Oprah Winfrey, Meghan discussed how she felt Thomas had misled her, referring to his actions as a "betrayal" she can't "reconcile.

She said: "When we were told by the comms team, this is a story that was going to be coming out… we called my dad and I asked him and he said, 'no, absolutely not'. I said, 'you know, the institution has never intervened for anything for us, but they can try to go in and kill this story'.

“'But if they do this once, we're not going to be able to use that same leverage to protect our own kids one day'.”

Thomas, an ex-Hollywood lighting director, has also commented on the royal couple.

In July 2018, he revealed he was no longer on speaking terms with Meghan after appearing on Good Morning Britain for an interview.

The Duchess of Sussex and Jessica Mulroney go back to Meghan's days in Canada when she was on the set for Suits in 2011.

The pair bonded over shared interests in fashion, fitness and female empowerment, Mulroney even had a hand in choosing the wedding dress Meghan's Suits character, Rachel Zane, wore in the final episode of the show.

Mulroney's twin sons were also page boys at the royal wedding – but their friendship is since thought to have floundered.

Amid backlash to her alleged problematic behaviour within the fashion community, Jessica appeared to try and use her close friendship with Meghan to her advantage.

In an Instagram post she said: "As I told you privately, I have lived a very public and personal experience with my closest friend where race was front and centre.

"It was deeply educational. I learned a lot from that. I promise to continue to learn and listen on how I can use my privilege to elevate and support Black voices.”

The Duchess was reportedly unhappy with being dragged into the drama and scaled back the friendship over the whole affair.

Reinforcing this idea, Mulroney posted a cryptic message on her Instagram story in 2021, saying: "Life changes. You lose love. You lose friends.

"You lose pieces of yourself that you never imagined would be gone. And then, without even realizing it, those pieces come back. New love enters. Better friends come along. And a stronger, wiser you, is staring back in the mirror.”

While the pair seem to have hit some bumps in their friendship, Mulroney has previously spoken out in defence of her pal during the accusation of bullying in the palace.

She posted a photo of the pair in March 2021 with the caption: "I don’t know that anyone has ever had to deal with the pressure, the politics and the press like this woman. In the face of it all, I have never seen her waver from kindness, empathy and love."

It is not known if the two are currently in touch.

The source added: "They had a bit of a fallout which was only resolved when Charles stepped in and asked William to make an effort. That's when the Cambridges invited the Sussexes to spend Christmas with them."

Katie Nicholl commented that: "William was quite concerned that the relationship had moved so quickly."

She speculated that Harry interpreted this as his brother not really being behind the marriage.

Harry touched on the subject of his relationship with his big brother when he appeared in an interview with Oprah.

At the time, he said: "As I’ve said before, I love William to bits. He’s my brother. We’ve been to hell together. But we’re on different paths.

"The relationship is 'space' at the moment. And time heals all things, hopefully."

More recently, the pair reunited during a statue unveiling of their mother, Diana.

It's thought they spend the morning prior looking through old keepsakes, notes from their mother while bonding together.

Ahead of the Queen's Platinum Jubilee, which Harry and Meghan will be attending, there have been no reports to suggest that William and Harry have sorted out their disputes, but Harry seems open to burying the hatchet.

Insiders told People Magazine last year that the Duchess of Cambridge has been struggling with seeing her husband, William, 'distraught' over Harry and Meghan leaving their royal duties.

In the interview with Oprah Winfrey, Meghan also claimed that Kate made her cry before she married Harry, sharing her take on a widely reported incident in which tears were shed at a wedding fitting.

However Kate was seen talking with Harry during Prince Philip's funeral, with reports emerging that she was 'trying to mediate' between her husband and brother-in-law.

Prince Charles was reportedly "at a loss" to explain his son's behaviour after comments he made to American journalist Hoda Kotb, according to sources close to him.

Harry spoke about how he wanted to "protect" the Queen and make sure she has the "right people around her", however, he refused to comment on whether he missed his dad now that he lives in California.

A rift between the father and son appeared to start following their announcement they would leave behind their royal duties.

During the interview with Oprah, Harry accused his dad of cutting him off financially and claimed he had stopped taking his calls.

"My family literally cut me off financially," Harry said.

He added: "Of course I will always love him but there's a lot of hurt that's happened and I will continue to make it one of my priorities to try and heal that."

He also appeared on the Armchair Expert podcast, where he criticised his father's parenting, saying: "When it comes to parenting, if I've experienced some form of pain or suffering because of the pain or suffering that perhaps my father or my parents had suffered, I'm going to make sure I break that cycle so that I don't pass it on.

"It's a lot of genetic pain and suffering that gets passed on anyway, so we as parents should be doing the most we can to try and say 'you know what, that happened to me, I'm going to make sure that doesn't happen to you'."

For all the latest Royal news, sign up to our daily newsletter here.