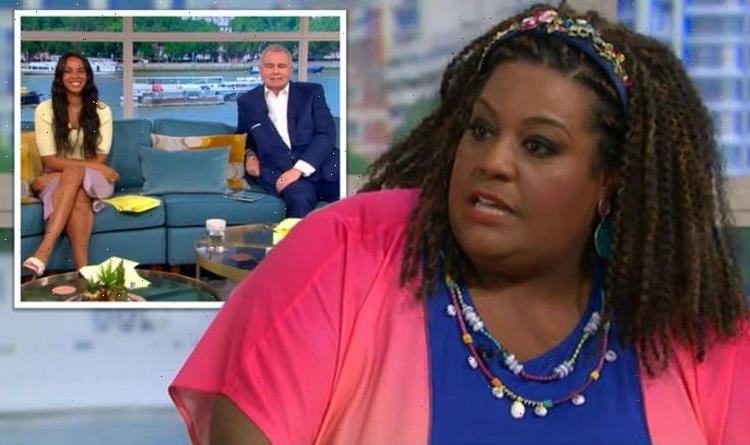 Alison Hammond took to social media today to say sorry for not presenting today’s episode of This Morning, which she was scheduled to host. The 46-year-old TV star shared an amusing reason for her absence.

The presenter posted a video from Manchester Pride showing revellers carrying a cardboard cut out of the television star at the event.

Alongside the footage, which she shared with her 938,000 followers, Alison issued her apology.

“I’m so sorry I was away from @thismorning today I had a mad crazy day at Manchester Pride.

“I’m now recovering from being passed about by all my mates!” she amusingly added along with two laughing emojis.

“This is brilliant,” one social media user remarked.

“Honestly. You look board stiff,” another quipped.

“Thanks queen was so much fun dancing with you!!” a third attendee added, while others simply shared laughing emojis beside the video.

Alison was due to present today’s This Morning with Rochelle Humes after the latter’s co-star, I’m A Celebrity… Get Me Out Of Here! finalist Vernon Kay tested positive for COVID-19.

He told The Sun: “I’m absolutely gutted that because of a positive Covid test I’m no longer able to present on This Morning next week with Rochelle nor do Radio 2 guest hosting and Steve Wright’s cover, two iconic shows which I’ve been a fan of for decades.”

Eamonn Holmes later revealed Alison was also unwell so he had been called in to present the Bank Holiday show.

The 61-year-old presenter, who hosted the programme during the summer holidays with his wife Ruth Langsford joked there was no getting rid of him.

“But just when u thought you’d got rid of me …. sickness with @AlisonHammond and @vernonkay means I’m off the bench.

“Get well soon to them but I have my Boots on and I’m ready to play.

“Monday and Tues line up is now myself and @RochelleHumes. Hope you can join us,”(sic) he tweeted in view of his one million followers.

Vernon and Rochelle were set to host the daytime show for three days this week before the return of regular presenters Holly Willoughby and Phillip Schofield.

Eamonn’s wife Ruth, also 61, revealed she watched the programme with her feet up from the comfort of her own home.