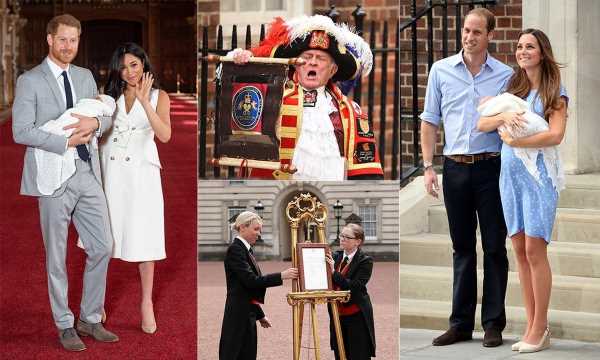 It’s only a matter of weeks before Prince Harry and Meghan Markle welcome their baby daughter. The couple, who quit royal life last year, are based in California and will not have to follow the strict protocol that comes with introducing a new member of the royal family to the world.

They’ll have the freedom to announce their daughter’s birth as they please and won’t be obliged to present the little girl in public, as royal parents before them have done.

Ahead of the Queen’s great-granddaughter’s imminent arrival, we’re taking a look at some of the most surprising royal baby traditions you may not have known about.

Back in the day, royal babies weren’t breastfed, they were usually born at home, and fathers weren’t allowed in the delivery room. Times have changed though and some of these traditions have been scrapped, but others, like the Queen being told first about the birth, still remain. While Harry may not have to follow protocol anymore, we’re sure his grandmother, who he’s incredibly close to, will be one of the first to hear the news.

The Queen was born at her grandfather’s London house, 17 Bruton Street in Mayfair, in 1926. Royal babies were typically born at home, and Her Majesty carried on this tradition by choosing to give birth to Prince Charles, Prince Andrew and Prince Edward at Buckingham Palace. Princess Anne was born at Clarence House, now the home of Prince Charles and the Duchess of Cornwall.

The trend to give birth in hospitals started with Princess Anne, who chose to deliver her children at St Mary’s Hospital in Paddington, London. The hospital’s private Lindo Wing has welcomed several royal babies, including Prince William, Prince Harry, Prince George, Princess Charlotte and Prince Louis.

A witness used to be present in the delivery room

The Home Secretary’s presence used to be required in the delivery room to witness and confirm the birth. The tradition dated back to the late 17th century, when King James II and Queen Mary Beatrice’s son James Stuart was rumoured to be an ‘imposter’. The Hanoverians claimed the real baby had died at birth and was replaced by a new one.

When the Queen was born in 1926, the Home Secretary was present although this tradition ended soon after, long before the birth of Prince Charles in 1948.

Fathers were not allowed in the delivery room

Traditionally, fathers would remain outside the delivery room. When the Queen was pregnant with Prince Charles, she experienced a long and arduous labour. Her husband Prince Philip spent some of the 30 hours swimming and playing squash, as he wasn’t allowed inside. Times have changed and Prince William was present for Prince George, Princess Charlotte and Prince Louis’s birth.

Royal babies were not breastfed

Queen Victoria famously hated being pregnant and refused to breastfeed her nine children, calling the action “repellent” and “the ruin of intellectual and refined young ladies”. Nowadays, it is personal preference.

The baby’s gender is not revealed before the birth

The palace will always announce a couple’s pregnancy and usually the month that the baby is due, although specifics – such as the baby’s gender and exact due date – remain private.

The public were not told Prince George, Princess Charlotte and Prince Louis’ gender until after the birth; it’s rumoured Prince William and Kate had kept the sex of their babies a surprise, too.

Harry and Meghan, however, chose to reveal they were expecting a daughter in March 2021 during their tell-all interview with Oprah.

MORE: 15 most surprising bombshells from Harry and Meghan’s Oprah interview

The royal baby has three or four names

Royals usually have three or four names, which are strong traditional names that have been used in the family for centuries, such as George and Charles.

Some names pay tribute to members of the royal family who married into The Firm; Princess Charlotte’s middle names are Elizabeth (in honour of Queen Elizabeth II), but also Diana (in tribute to Princess Diana). Prince George’s middle names are Alexander and Louis, while Prince Louis’s are Arthur and Charles. The Queen typically approves the names of royal babies who are closest in line to the throne.

Harry and Meghan chose to name their son Archie with Harrison, literally meaning the son of Harry, as his middle name.

The birth is announced via a town crier

One of the most traditional highlights of a royal baby’s birth is the announcement by a town crier. Tony Appleton has had the privilege of announcing the births of Prince George, Princess Charlotte and Prince Louis on the steps of the Lindo Wing. The role originated in medieval times when the majority of townspeople could not read or write.

An easel is displayed at Buckingham Palace

Nowadays, a royal couple’s social media team will announce their news on Twitter and Instagram, while also sending out statements to the press. But those who want to see the official announcement in print can visit Buckingham Palace, where the bulletin, showing the baby’s sex, weight and time of birth, signed by the medical team, will be displayed on an easel. The announcement used to be handwritten, signed at the hospital and delivered back to the palace via car.

A gun salute is fired

As with special occasions such as anniversaries and birthdays, a royal gun salute is fired to celebrate a new birth. They take place across the UK and at the Tower of London, and either Hyde Park or Green Park, depending on the event. Gun salutes at the Tower of London go on for ten minutes, because the Tower is a Royal Palace and is located in the City of London.

The baby is christened soon after the birth

Christenings usually take place two or three months after the birth, and it’s the second time the newborn makes his or her official appearance, the first being outside the hospital. The Queen was only one month old when she was baptised in the private chapel of Buckingham Palace, while Prince William was two months old, and Prince Harry was three months old.

Royal babies typically wear the beautiful Honiton lace christening gown. The gown is a replica of the one made for Queen Victoria’s eldest child, Victoria, in 1841, which became too fragile after generations of use. Other royal babies who have worn the replica include Prince George and Mia Tindall, while the original was worn by Prince William and Prince Harry among others.

Official photos are released shortly after the christening, and show the newborn with his or her parents, godparents and members of the royal family.

The baby typically has six godparents

While most of us have three or four godparents, royal babies are usually given at least five. Prince George, who is third-in-line to the throne, has seven godparents: Oliver Baker, Emilia Jardine-Paterson, Earl Grosvenor, Jamie Lowther-Pinkerton, Julia Samuel, William van Cutsem and Zara Tindall.

Zara is Prince William’s cousin, while Julia was a close friend of Princess Diana.

Harry and Meghan’s son Archie was christened during an intimate ceremony at Windsor Castle in July 2019, two months after his birth. Only a handful of the couple’s closest friends and family attended and the identities of baby’s godparents were kept hidden “in keeping with their wishes”.

However, it has since been revealed that the Sussexes asked Tiggy Pettifer (formerly Legge-Bourke), who is Prince William and Prince Harry’s former nanny, and Mark Dyer, the Prince of Wales’ former equerry and close friend, to be godparents.

Royal children used to be home-schooled

Along with her sister Princess Margaret, the Queen was educated at home under the supervision of their mother and their governess, Marion Crawford. In 1955, Buckingham Palace announced that Prince Charles wanted to attend school, rather than have a private tutor. He was the first heir apparent to be educated at school.

His sons William and Harry also attended private school as youngsters in London, before enrolling at the prestigious Eton College. Prince George, meanwhile, started school in September 2017 at Thomas’s Battersea with Princess Charlotte following suit in 2019.

Before 1917, members of the royal family had no surname, but only the name of the house or dynasty to which they belonged. Kings and princes were historically known by the names of the countries over which they ruled. Kings and queens therefore signed themselves by their first names only, a tradition which has continued to the present day.

But in 1917, there was a radical change when George V specifically adopted Windsor, not only as the name of the ‘House’ or dynasty, but also as the surname of his family.

The Queen has kept the surname, but in 1960, she and Prince Philip decided that their descendants would be distinguished from the rest of the family with the surname, Mountbatten-Windsor.

Harry and Meghan’s son also has the surname Mountbatten-Windsor.