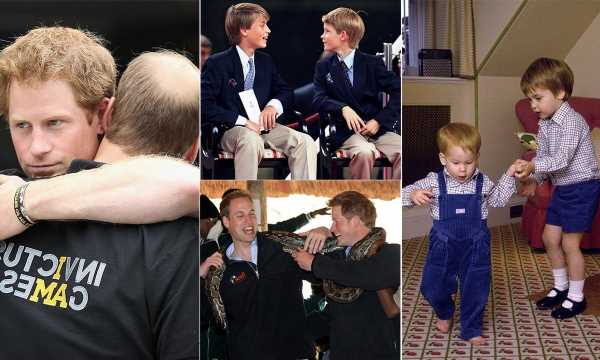 Ever since Prince Harry stepped back from royal life, there’s been an evident coolness between the Duke and his older brother Prince William‘s relationship. The rift between the siblings and Harry’s tension with his father Prince Charles has been widely reported on, but Harry has said how he’s hoping to “heal” his relationship with his dad, and how he’ll always love his big brother.

“I love William to bits, he’s my brother, we’ve been through hell together, we have a shared experience, but we were on different paths,” Harry told Oprah Winfrey in his interview in March.

The royals are indeed on different paths – living across the world from each other with William destined to be King one day, while Harry embraces his new freedom in the US. But the first steps of reconciliation were seen during Prince Philip’s funeral in April, when the brothers were spotted chatting together in a scene that looked like old times.

As they sort through their matters privately, we’re taking a look back to happier times when William and Harry showed their unbreakable bond.

WATCH: William and Harry remember their mum as they look through childhood photographs

William was ready to catch Harry as he tottered around their playroom in Kensington Palace in 1985. Harry was just one year old, while his big brother was three.

Pictured with their mum Princess Diana, William and Harry may look like they’re playing dress up, but the boys were actually wearing the uniforms of the 1st Battalion of the Parachute Regiment, of which their dad Prince Charles is colonel-in-chief. The family were enjoying a break at their country house in Gloucestershire, Highgrove House.

MORE: Prince William reveals what he did on the morning of Princess Diana’s death

Diana strived to give her boys as normal an upbringing as possible, which would mean taking them to theme parks and playgrounds like other kids.

“Behind closed doors, she was a very loving, caring mother and an incredibly funny person,” Harry said on ITV documentary, Diana, Our Mother: Her Life and Legacy. “I think she lived a lot of her life, especially in private, through us and I think that childish fun element really came out when she was spending time with us.”

He added: “She was our mum. She still is our mum. And of course, as a son I would say this, she was the best mum in the world. She smothered us with love, that’s for sure.”

GALLERY: 14 of the sweetest photos of Princess Diana with William and Harry

Suited and booted, Harry and William chat as they accompanied their parents to the 50th anniversary celebrations of VJ Day in London.

We’d love to know what Harry said to William to make him smirk!

William gets a congratulatory handshake from his younger brother after running the Sport Relief London Mile in six minutes and ten seconds. Harry had been due to take part but was unable to because of a minor injury.

Harry teases his brother with a snake during a visit to the Mokolodi Education Centre in Botswana. The royals, who were holding an African rock python, were on a six-day joint trip to visit charities they support across Botswana, Lesotho and South Africa.

They got into the spirit of things, showing off their dance moves and their shared humour, during the tour.

Joking around on engagements is always part of William and Harry’s M.O. The brothers both love Star Wars and even made a cameo appearance as Stormtroopers in Star Wars: The Last Jedi. However, the scene, which also featured Tom Hardy, sadly wound up on the cutting floor.

William has always been there for the important moments, like being on hand to welcome Harry back home following his active service in Afghanistan in 2008.

There could have been no other man for the job. Harry played the all-important role of best man at Prince William’s wedding in 2011. As Kate walked up the aisle, Harry told the groom: “Right, she is here now. Well, she looks beautiful, I can tell you that.”

The Duke of Cambridge was able to repay the favour in 2018 when Harry married Meghan Markle. The brothers looked totally at ease as they waited for the bride to arrive.

The brothers have both inherited their parents’ philanthropic nature. Here, they’re pictured gearing up for a motorcycle charity ride in South Africa in 2008.

A meaningful hug for the royal duo as William supported Harry at his Invictus Games project in 2014.